The "Lightning Round" segment of Mad Money is a viewer favorite. This is when callers can ask Jim Cramer about stocks they are interested in. Monday night one caller asked about International Flavors & Fragrances (IFF) : "I think this merger is going to be terrific. The stock is a buy right here," said Cramer. " I also like Estee Lauder (EL) ," Cramer added.

In this daily bar chart of IFF, below, we can see that prices lost ground in February and half of March but regained most of the decline into early June. Prices have been moving sideways to lower into August but there are signs of strength too.
IFF is trading below the declining 50-day moving average line and the cresting  200-day moving average line.
The On-Balance-Volume (OBV) line weakened from January into early April as sellers of IFF were more aggressive. The line improved from early April to early June and has since slipped lower suggesting that sellers are back as the more aggressive party.
The 12-day price momentum indicator made a low in June and a higher low in August as prices made equal lows in June and August. This difference in movement between prices and indicators is a bullish divergence. This divergence is a clue that buyers have been more aggressive in August than June. This might foreshadow a turn higher for IFF.

In this weekly bar chart of IFF, below, we do not find the most compelling picture. Prices are below the declining 40-week moving average line.
The weekly OBV line has been weak since early 2018. The MACD oscillator has just slipped below the zero line for an outright sell signal.

In this daily Point and Figure chart of IFF, below, we can see a potential downside price target in the $105 area but we can also see that prices are holding (for now) in the bottom end of an active support area. 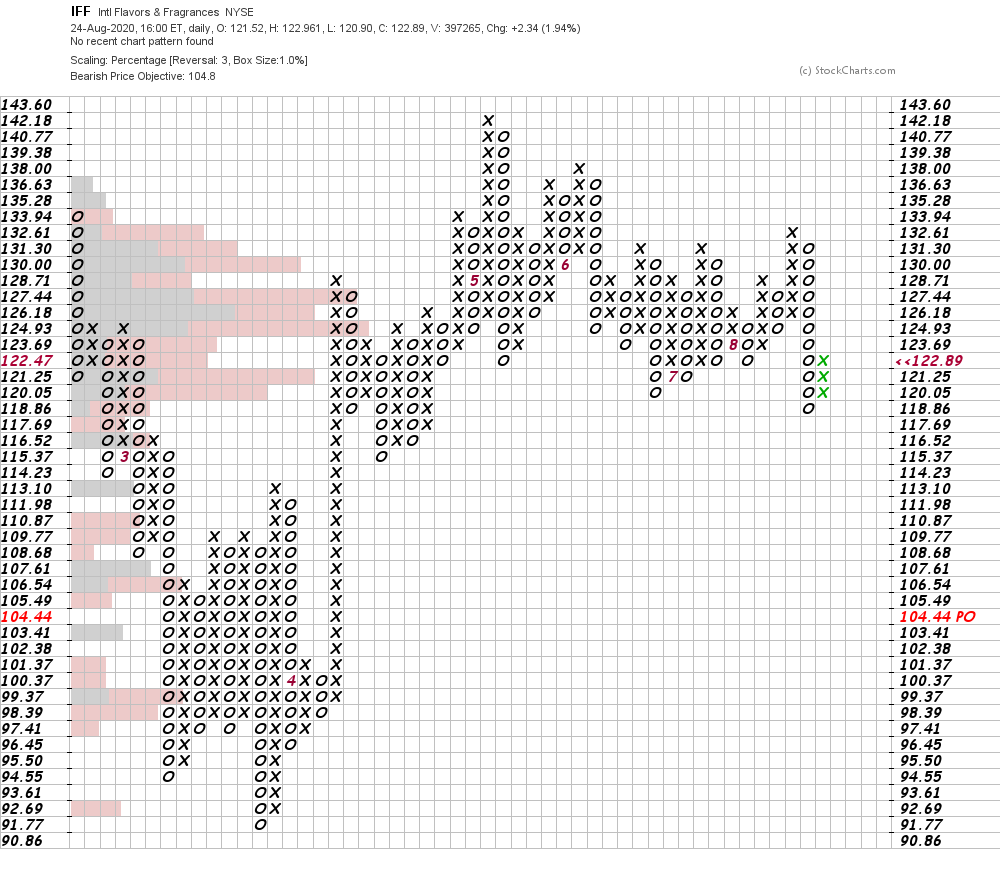 Bottom line strategy: IFF needs to prove itself. Traders should wait for price strength and expanded volume with IFF above $130 before committing to the long side.
Get an email alert each time I write an article for Real Money. Click the "+Follow" next to my byline to this article.
TAGS: Investing | Stocks | Technical Analysis | Trading | Chemicals | Food & Drink | Mad Money

Charts Suggest a Possible Turning Point for the Markets

Here's why we now believe weakness can be bought with a higher level of confidence.