You've heard of chips with dip. How about dip with chips, or is it just Intel (INTC) ? The headlines read not great, but okay. Once a reader digs into the story, and goes into the material, the head starts to shake. The quarter was not so good. The future sounds uncertain as well. Intel posted adjusted EPS of $1.11, which was in line with expectations. Strip out the adjustment, and Intel missed by two cents. Revenue generation for the period landed at $18.3 billion, still dwarfing my favorite chip names, and beating consensus. Still down (-4.7%) year over year.

Now, if you own the shares, you may want to sit down. Yes, I saw the slightly improved guidance. You need to see this. Adjusted gross margin for Q3 2020 printed at 54.8%. Well below the 56.8% that Wall Street expected. Way below the 60.4% print for Q3 2019. Ugly. Less margin on lower sales. That about describes it, but of course, we will go into some detail.

Sure, Intel increased full year non-GAAP EPS guidance to $4.90, from prior guidance of $4.85. The firm also increased projected full year revenues to line up around $75.3 billion, up from the $75 billion mentioned three months ago. The firm lifted Q4 projections similarly. That's not the problem. Or problems.

For the third quarter, sales for the Data Center Group fell 7% to $5.9 billion. Consensus was for $6.2 billion+. For everything considered Data-centric, which includes the DCG as well as the IOTG (Internet of Things Group), Mobileye, NSG (memory and storage, much of which the firm has just agreed to sell to SK Hynix),and PSG (programmable semiconductors)... sales were -10%. For everything PC-centric (53.5% of Intel's entire business), Intel saw increased sales of 1%. With everyone working from home. Hmm.

The good news might be that the firm's third 10nm (nanometer) facility in Arizona is fully operational at this point. Intel expects to ship 30% more in volume for this sized chip than projected at the start of the year. The bad news would be that the industry is moving toward the next generation (7nm), and while Intel did warn of delays here last quarter, they did nothing last night in the way of addressing a plan to correct this or play "catch-up". This allows both of my favorites in the space, Nvidia (NVDA) and Advanced Micro Devices (AMD) to not just gain market share in businesses where Intel has been the undisputed leader, but to do so where the higher margins are. Big issue. AMD reports next week, Nvidia not until mid-November. Can't wait to hear what Lisa Su and Jensen Huang have to say.

Quite Simply, if one bought into Intel back on the July beat-down (also earnings related), then basically you are right back where you started. If you bought at any other point this year other than the market lows of March, you probably have a mistake on your hands. Sell now? I wouldn't. Initiate here? I might, depending on what I need to allocate to chips overall. I have made clear that NVDA and AMD column first. I have been in and out of Marvell Technology (MRVL) and Taiwan Semiconductor (TSM) as a trader. Gave up on Seagate (STX) forever ago, but that remains a great dividend play if that's a reason for you. I have stayed away from memory, though be alert to a potential breakout developing in Micron (MU) . 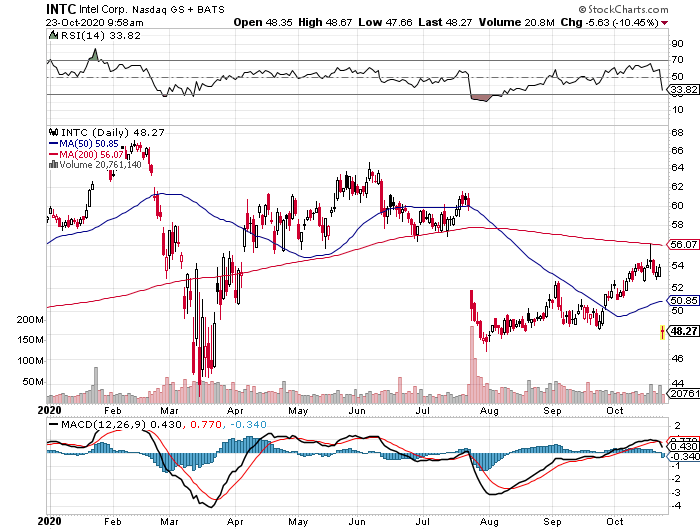 As for Intel specifically, the shares have been soundly rejected at the 200 day SMA despite never fully filling the gap created in July. Now, INTC has two gaps to fill, and both require upward mobility. That is a technical positive. I think for now, investors will either have to find some place else for their money or be patient. Traders will hope for a little game of ping-pong to be played in between the 50 day SMA and that 20 day line. That said, even retaking the 50 day line would require a 4% move. Not a lot to like here.

(NVDA, AMD and MRVL are holdings in Jim Cramer's Action Alerts PLUS member club. Want to be alerted before Jim Cramer buys or sells these stocks? Learn more now.)