The bell had just pealed its last. I was in the back of a car, moving across the Brooklyn Bridge in slow traffic. Set to go through my list of names set to report after the close. Usually have to hit "refresh" several times in fits of impatience. Not this time. Intel (INTC) was already there. The firm was obviously in a rush to release this news, and small wonder. They simply hit the ball out of the park. I came in flat. I really couldn't whine much. I had rotated out of Intel much earlier in the year over several tranches and allocated those funds directly into Advanced Micro Devices (AMD) , and Nvidia (NVDA) . That capital indeed performed, but gee whiz, couldn't I have left something in Intel? This is what makes the financial markets the absolute greatest sport of them all. The never-ending challenge reliance on persistent work ethic, intellectual exercise, and at the end of the day... still involves anticipating uncertain outcome. Beat that for love of the game.

Among the firm's business units, Client Computing, which is PC-Centric contributed the lion's share at $10 billion in sales, up a modest 2%, but well above consensus. Going into the firm's Data-Centric businesses... the largest would easily be the Data Center. This line drove home $7.2 billion in revenue, up 19% and smashing expectations of something in the $6.4 billion neighborhood. Spectacular job by CEO Robert Swan and his team here. I'm sorry I doubted him. Among smaller business lines, Non-Volatile Memory Solutions grew 10% to $1.2 billion, and the Internet of Things (IoT) grew 13% to $920 million, but within that number, Mobileye revenue increased 31% to $240 million. Only the smallest business line... Programmable Solutions saw a decrease in sales performance at $505 million (-17%). Adjusted gross margin landed at 60.1%, which is down from Q4 2018, but well above the 58.4% that had been expected, as the higher than expected sales performance produced had come from higher margin businesses.

I guess, based on the forecast made last week by Taiwan Semiconductor (TSM) , the elite contract chip manufacturer for the current quarter, the surge now seen across many of the semis would not truly be surprising. The dots were there to connect. From the press release, Robert Swan said, "One year into our long-term financial plan, we have outperformed our revenue and EPS expectations. Looking ahead, we are investing to win the technology inflections of the future, play a bigger role in the success of our customers and increase shareholder returns."

For the full year, Intel is now forecasting EPS of roughly $5 on revenue of $73.5 billion. Intel generated $72 billion in sales for FY 2019, so what I am trying to tell you is that the firm expects sales growth to moderate after the first quarter. In addition, Intel announced an increase of one cent to the quarterly dividend from $0.32 to $0.33, bring the yield up to 2.1%.

What are "they" saying in response to this earnings report? So far, I count at least 15 members of the analyst community making public commentary since Thursday afternoon, so I am not going to bore the stuffing out of you by going though that avalanche of available information. (Remember, this crew is in general, the same crew that was too low in their expectations coming in). You should probably be aware however, that not all of the commentary made is of the bandwagon variety, All 15 names are highly or close to highly rated individuals. Among the 15, there are only seven Buys or Buy equivalents.There are four Sells, and four Holds. Of those 15 names, 12 are currently running with price targets, and the average price target of those 12 is $66.79. The last sale I see on my screen is now above $68. 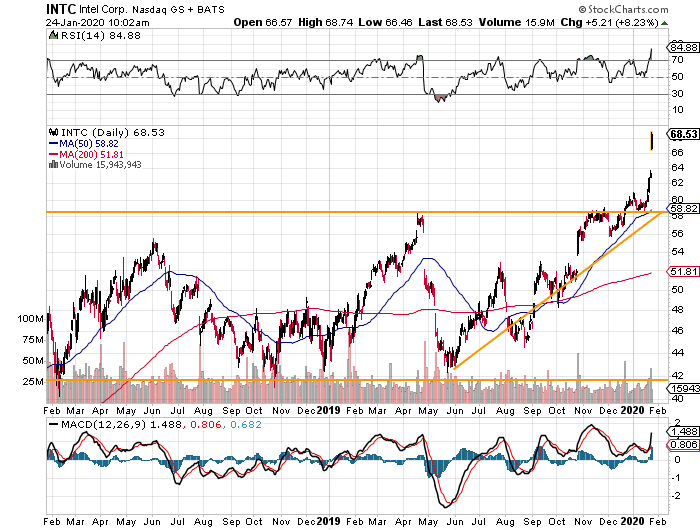 What I see is an incredibly lengthy basing period that runs back about two years, that starting back in May, started to morph in to an ascending triangle. Ascending triangles for the new kids are generally though of as a bullish development. At this point, for Intel, that's obvious, but stick that in the back of your cranium for future reference.

What you want to know is if it is too late to buy Intel? I would not buy the name today, that's for sure. I generally do not chase names on an 8% move if I have already missed, and I still have several other semiconductor arrows in my quiver, so I am not underexposed to the industry. I am long $68 INTC puts that expire this afternoon, but I literally just bought those as they are now trading for a song, and there is not much risk involved.

I think this name can be purchased once the gap between the last sale and the 50 day SMA narrows a bit. Next week, you'll hear from the Fed, there will be more earnings reported than during any other week this season, and we'll negotiate a heavy macro calendar. You may get your chance sooner than you think.

Get an email alert each time I write an article for Real Money. Click the "+Follow" next to my byline to this article.
TAGS: Earnings | Investing | Markets | Options | Stocks | Technical Analysis | Trading | Semiconductors & Semiconductor Equipment | Technology | Stock of the Day