I kind of like Intel (INTC) . I kind of always have. I kind of like the story that former CEO Brian Krzanich told. I invested in that story. It was a solid investment in an undervalued large cap in an industry that was taking off that paid a nice dividend as well. Over time, after the departure of Krzanich, I became less enchanted with this name. I like Robert Swan. I think he is one smart guy. I think he can do this job. I really, really like Lisa Su. I rotated out of INTC and into Advanced Micro Devices (AMD) , exiting INTC completely by late March. I missed the last few dollars in INTC. The sale looks better now. If I want them back, looks like I'm getting another chance.

Thursday evening. On the road. Intel's numbers come over the radio. EPS? Beat. Revenue? Flat, but we expected to see contraction. This might be solid. I thought. For a little while. Turns out, there are problems. Problems specifically for memory pricing that markets I think did understand, but are manifesting in severely weakened demand for the data center adoption in China. Not to mention the firm just pulled back from manufacturing 5G capable chips for mobile devices. That refocusing may, in the long run, be a blessing. Just not today.

Intel guides revenue toward $15.6 billion for the second quarter. Consensus had been for $16.88 billion. As to earnings per share, the firm expects to be far less profitable, now looking at $0.89 versus $1.02. Not good. Full year guidance is no better. Even with what Swan sees as improved performance in the second half of the year, he sees EPS for the year in a range spanning $4.35 to $4.60 on revenue somewhere in between $69 billion and $71.5 billion. These numbers move the mid-points well below the former industry view of EPS of $4.52 on revs of $71.34 billion.

What's that? You don't care about this stuff so much. You just want to know if you should buy INTC on this dip? Understood. I come in short $55 puts that expire tonight. I sold them for $1.37, so there is a good chance that I will be long the stock on Monday morning at a net basis of $53.63. Should I let that happen, or just buy back the puts and eat the 70 or 80 cents? As I write this note, the shares are trading just below $53, but there is a 31.5 cents per share dividend payment payable on June 1st to shareholders of record on May 7th. So, the money on April 26th is not that much of a consideration in the decision. 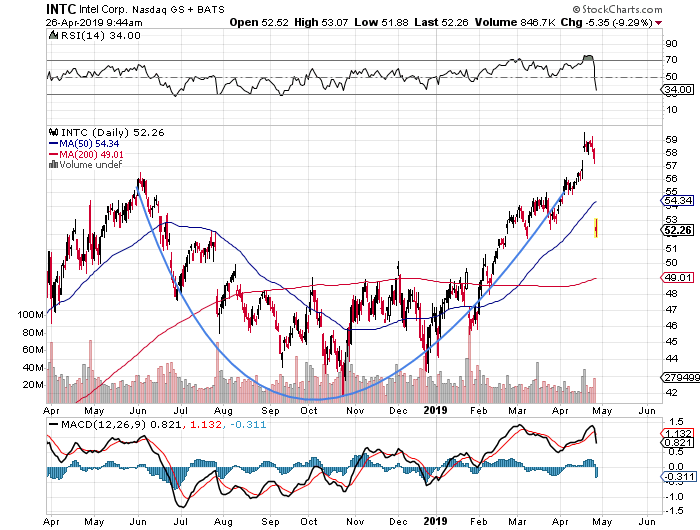 What is visible here is year long cup formation, that upon a different response to last nights' results probably would have had me setting a price target in the mid-$60's. Now, we have significant failure of an attempted break out. Bear in mind that the crossing over of the last sale over the 50 day SMA is considered a major sell signal by a lot of portfolio managers. This provokes exacerbated algorithmic response. There will be additional downgrades.

My thought, is that I may allow those puts to be exercised. Probably only if the stock can retake that blue line though. I think that I can always buy the stock around here somewhere next week if I so desire. I would like to see this name base before puling any additional levers.

Personally, I may buy back the puts, and lose the 80 cents or so. I think I become interested in the equity at close to $49. AMD reports nest week. Nvidia (NVDA) reports in three weeks. The complexion of the industry, not to mention ETF flows, could be greatly improved by then, not to mention what any China news does to all of these stocks. If I do cover those puts, I likely...

This at least pays for today's hiccup, and once again provides me with the opportunity to get long if I desire three months down the road. I could get long in three months anyway, you say? Good point, but that involves accepting a loss today. A trader coming in with no position could also sell these puts in order to raise a little cash if they think the stock never gets there.

Get an email alert each time I write an article for Real Money. Click the "+Follow" next to my byline to this article.
TAGS: Earnings | Investing | Markets | Options | Stocks | Technical Analysis | Trading | Semiconductors & Semiconductor Equipment | China | Stock of the Day

Usually comes down -- and here's why I suspect we'll retreat after Tuesday's rally.