It should have been a good day for semiconductor stocks. On Wednesday, the WSTS (World Semiconductor Trade Statistics) released the organization's new semiconductor market forecast generated in May. The group forecasts that the worldwide semiconductor market is expected to increase 16.3% in 2022 to $646B on top of the red-hot growth of 26.2% for 2021. WSTS also expects to see growth across all semiconductor categories as well as all geographical regions led by the Americas at 22.6%. The group also sees slower growth of 5.1% in 2023. This is a stronger report than many were looking for.

According to Reuters, Intel is cutting back on spending for one of its key business units immediately. Intel is apparently "pausing all hiring and placing all job requisitions on hold" for its "Client Computing Group", while also canceling some travel and reducing industry conferences for the group, while issuing instructions to hold group meetings virtually. Because you were about to ask, this unit contributed $9.3B in sales to the firm's $18.4B in total sales generated during the first quarter.

In addition, two company executives who presented on behalf of the firm at the BofA Global Tech Conference on Wednesday... CFO Dave Zinsner and Executive VP Sandra Rivera, appeared to try to talk "down the quarter", citing major headwinds to near-term performance such as clientele reducing inventory, and Covid-related lockdowns in China.

It wasn't just Wednesday. Intel was already having a lousy week, at least according to Wall Street. On Monday, four star rated (at TipRanks) analyst Stacy Rasgon of Bernstein maintained his "sell" rating on Intel with a $40 target price.

Then on Wednesday, four star rated (by TipRanks) analyst Christopher Danely of Citigroup wrote to investors that his "bear case" scenario for Intel might be taking shape. Danley maintained his "neutral" rating and $45 target price, but slashed his earnings and revenue estimates for Intel for both the current quarter and the full year, citing CFO Dave Zinsner's cautiousness earlier in the day. Zinsner spoke about near-term choppiness and apparently did not sound confident. On Monday, Danely stated that he expects Intel to pre-announce or flat out miss second quarter projections.

There's more. Also on Wednesday... five star rated (at TipRanks) Vivek Arya of Bank of America reiterated his "underperform" rating on Intel and his $47 target price after the company's presentation at the BofA global Tech Conference. Arya wrote, "Management suggested they are seeing elevated inventory levels in parts of the PC and data center due to weaker sell-through and changes in finding matched sets to complete the bill of materials. Recall that during INTC's Q1 earnings call, it guided Q2 weaker, but kept (the) full year CY22 outlook unchanged at $76B. That was predicated on seasonal strength in the 2H22 which now looks unlikely." Arya then adds... "There could be additional gross margin risk to Wall Street's 52% GM expectations for 2H."

Intel reported the firm's first quarter financial performance on 28 April. The firm is expected to report the current quarter on or about 28 July. Currently Wall Street is looking for adjusted EPS of $0.70, which is at the lower end of the firm's "conservative" guidance in late April. Revenue is seen at $18B, which is also at the extreme lower bound of previous guidance. If these numbers prove true, the quarter's results would amount to year over year earnings "growth" of -45.3% on revenue "growth" of almost -3%. Wall Street now sees full year earnings growth at -36%.

Fortunately for the shareholders, though the firm's execution has been lacking for an extended period, the foundation is solid. The firm generated free cash flow of $0.27 per share during Q1, which is historically poor performance for Intel, but up big from deeply negative FCF for Q4. The firm ended the last quarter with a net cash position of $38.606B and inventories of $11.935B. This brought current assets up to $62.568B. That compares quite well versus current liabilities of $29.322B, leaving the firm with a very healthy current ratio of 2.13. Even replacing the inventory value with a zero, would leave the firm with a quick ratio of 1.73. Intel can pay Intel's bills. No problem.

Total assets add up to $176.356B, but that does include $33.824B worth of "goodwill" and other intangibles. Assets dwarf total liabilities of $73.22B with or without the entries for intangibles. Long-term debt is a bit hefty at $32.788B, but that is actually down for Intel and could be paid out of cash in an imaginary pinch. As of April, Intel had a tangible book value of $16.95 per share. At this morning's last sale ($41.22), INTC traded at 2.43 times tangible book. Intel may have problems, the balance sheet is not one of them. 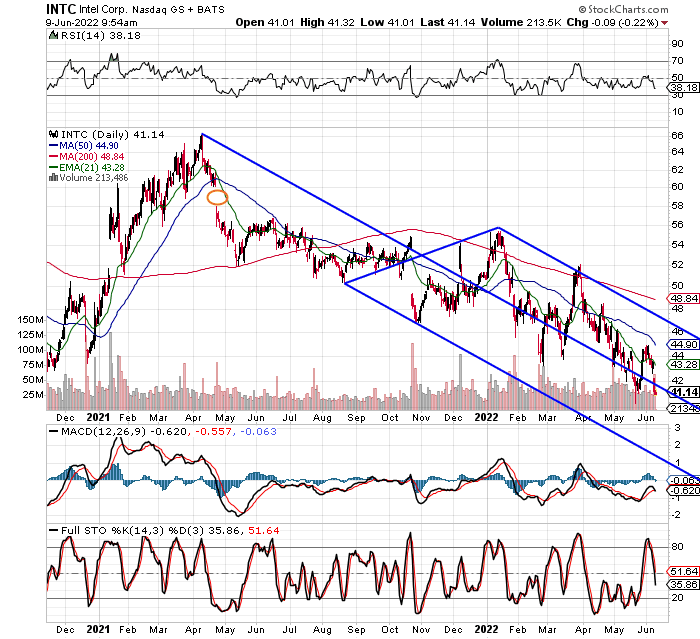 Readers can see that INTC has been mired in a downtrend since April 2021 that fits neatly into an ongoing Pitchfork model. After residing in the upper chamber of that Pitchfork for most of 2022, the shares appear to be testing the central trendline this morning and could find themselves residing in the lower chamber of this model if that line is not quickly retaken.

At no point in answering any of those questions, would I suggest Intel to the aspiring investor. That says a lot, because long-time readers know darned well that just a few years ago, I was almost always long INTC.

If You Insist... in Playing INTC

My suggestion would be to play a simple, options-related strategy that controls risk while allowing for upside profitability on the prospects that the firm may be setting itself up for a Q2 beat of heavily managed expectations.

(NVDA and AMD are holdings in the Action Alerts PLUS member club. Want to be alerted before AAP buys or sells these stocks? Learn more now.)

Get an email alert each time I write an article for Real Money. Click the "+Follow" next to my byline to this article.
TAGS: Earnings | Economy | Investing | Stocks | Technical Analysis | Trading | Semiconductors & Semiconductor Equipment | Technology | Technology Hardware & Equipment