Palantir (PLTR) rising? Sure, I trade the name. I also hold a core investment. I see this name as such an obvious long that perhaps it might not be. For sure, there is no consensus among smart people on which way the wind blows. Palantir reported the firm's first quarter financial results about two weeks ago. The results were positive, yet not at first well received. That said, the shares have moved higher since.

For the first quarter, adjusted earnings met expectations, while revenue generation increased 48.7% to $341 million. That was a beat, and the sixth consecutive quarterly revenue print to sport revenue growth of 40% or greater. Revenue growth generated by the firm's most important client, the U.S. government, expanded 83%, while commercially based revenue showed good strength at a 72% rise.

The firm projected revenue of $360 million for the current quarter, which would be good for growth of 43%, while sticking to its longer term projection of maintaining annual revenue growth of at least 30% this year on through the year 2025.

What is Palantir and Who Cares?

Palantir is a software developer founded back in 2003, that has built, deployed and runs two primary "big data'' platforms.

Palantir Gotham is designed for use by government operatives working in the defense and intelligence sectors. The platform enables users to identify patterns hidden deep within datasets, ranging from signals from intelligence sources to reports from confidential informants, as well as facilitates that handoff between analyst and operational users, helping operators plan and execute real-world responses to threats that have been identified within the platform.

Palantir Foundry is a platform that transforms the ways that organizations operate a central operating system for their data, and allows individual users to integrate and analyze the data they need in one place.

Since earnings were reported two weeks ago, we have learned through 13-F filings and other news releases that several high profile investors have either entered into, or exited long positions in Palantir. While Soros Fund Management exited the name at some point in Q1, Stanley Druckenmiller's Duquesne Family Office took on a new stake in PLTR, good for just less than six million shares. Cathie Wood's ARK Innovation Fund (ARKK) also added nearly 260K shares of PLTR to an existing long position.

For one, we all know that President Biden signed an executive order meant to bolster American cybersecurity in the wake of the ransomware attack on Colonial Pipeline properties that itself came on the heels of several other high profile cyber attacks. Who does this help besides the well known cybersecurity vendors? Well, if you ask five star analyst Dan Ives of Wedbush, he thinks increased federal spending in this case will benefit what he calls "Beltway" players such as Telos (TLS) and Palantir.

This morning (Monday, May 24th), news broke that Palantir will provide software to the critical missions of the Department of the Air Force Space and Missile Systems Center's Cross-Mission Ground & Communications Enterprise and NORAD-NORTHCOM. Col. Jennifer Krolikowski (USSF) said, "Palantir's technology and framework has truly accelerated our ability to remove data stovepipes throughout the community and create actionable knowledge." 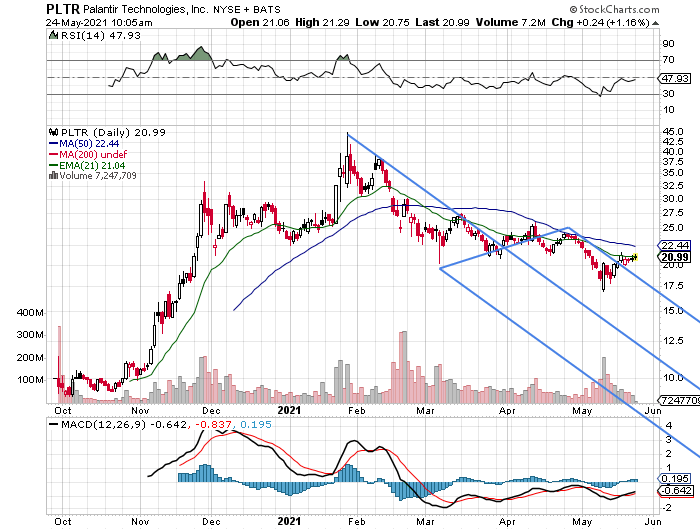 Readers will note that though suffering a series of lower highs coupled with lower lows, Palantir is showing signs of breaking out of this pattern. Make no mistake, this is still on overvalued (based on the fundamentals) stock with a three figure forward looking PE ratio. That said, revenue just keeps on growing aggressively. This is the kind of stock that markets have been rotating out of for most of 2021 so far, but have seen a recent and mild un-rotation.

This is not a value stock. That said, I am long a full position of the shares. My net basis is $20.42, so I am not in a jam. I choose to stay long. I see this name as integral to the future of national (and corporate) security as these issues are not going to decrease in either frequency nor severity going forward.

My plan is this. I see the 50 day SMA of $22.44 as a moving pivot. Right now, a take of that line would place my target price at $28. I am willing to add on weakness down to the May low of $17. Despite my tendency to trade, which is my SOP, this name is a long-term investment, especially with so much federal spending up in the air. The question is just how much is so much.

If writing put options at discounted strike prices where you are comfortable talking on equity risk is your thing, I think the June 18th $18.50 puts for $0.31, the July 16th $18 puts for $0.52, and the August 20th $17 puts for about $0.62, all look attractive for a sale. Just be cognizant that the current quarter is likely to be reported ahead of that August expiration.

Get an email alert each time I write an article for Real Money. Click the "+Follow" next to my byline to this article.
TAGS: Investing | Stocks | Technical Analysis | Trading | Cybersecurity | Defense