Two dots glowing in the moonlight. I think the year is 1983. Darkness falls. The creatures of the night begin to stir. Out in the Mojave, one moves slowly at night. You always want to be able to stop in place gracefully just in case you hear the rattle, and you will hear the rattle. Light discipline. Radio silence. Upon hearing the rattle, one slowly backs away from the direction of the sound after freezing for a minute or so. Problems arise when one hears multiple rattles from several directions. When that happens, that next step is really, shall we say... exciting. No, this is not a snake story. I had found a small cut in the terrain. I needed to get some sleep, and I needed to ensure that there would be no silhouette unnatural to the environment left in anyone's field of vision. No snakes. No spiders. No scorpions. Sleep.

A short while later, I startle awake. Moving as little as possible while feigning sleep, I reach for my Ka-Bar. I turn my head to the left. Two eyes staring down at me from the top of the cut, maybe five feet away. Those eyes must think I have food. Maybe they think I am food. What to do? Suddenly a second coyote jumps over me while I keep eyes on the first. Didn't even know that this other fellow was in the hole with me. Sometimes, the surprise comes form somewhere previously unseen. Long story short, the guy in the hole with me ended up eating a face full of sand, and once confronted his companion(s)... there ended up being a few of them ran into the night. Sleep was over for now.

Moral of that story? Expect nothing. Anticipate anything. Ever vigilant. Always alert.

For a number of days, traders had become accustomed to late day rallies. In fact, the pattern had become quite playable. Wednesday was different. Take a look.

A sharp selloff after 15:30 ET. Not the lows of the day, but close enough. Not all bad, trading volume was lower on Wednesday than it had been on Tuesday, so naysayers could not really refer to the afternoon as a distribution event. Yet, by that same token, volumes have been "light-ish" throughout this more than a month-long rally. What does that suggest to me?

Well, after thinking on it, there is no denying that the post Christmas move has been impressive, and that there has been at least three chances for institutional selling to resume. That selling has in each and every case failed to materialize. There is no doubt that a change in central bank posture turned the markets in late December. What the folks want to know, quite simply... is this. Are we currently in the later stages of a corrective rally, or are we somewhere between lift-off and orbit while we await positive news on trade? As I have intimated in other early morning missives, this has the feel of a sellers' strike... an institutional seller's strike.

Now that the 200 day simple moving average for the S&P 500 managed to pass its first "sort of" test from the upside, short-term support now likely rests right there (2743). Should that spot break, the folks need to look to the 10 day SMA, as that moving average has provided cover for the index all year. That spot now stands at 2722. Thirty points worth of wiggle room before panic would set in.

A failure by the president to sign the budget legislation, or an unexpectedly negative turn of events in Beijing this week, would provoke a test there. After that, we play "Chutes and Ladders." A positive sounding outcome, and the market will likely still sell this rally on the news after the parabolic move that we have benefited from, but not without spiking higher initially. 2800 is not a stupid idea on this kind of news. After that... the reality of less favorable tax comparisons upon Q1 earnings becomes fact. That said, the hamper likely keeps the Fed in check.

About That Tax Comparison

One obvious casualty of the already referred to tax reform plan that boosted not only corporate earnings, but GDP as well as demand for labor, has been the federal government's budget deficit. The problem would be that the growth has not, at least not yet... paid for itself. Treasury reports that for the calendar year 2018 this deficit grew 28.2% from the year prior. The federal government fell $873 billion short of breaking even over the course of those 12 months, putting to the tape the worst looking deficit since... 2012. Bet you thought I was going to go way back. Nope, we have been gorging ourselves at the expense of our children and grandchildren for many years.

I can't take credit for this analogy. If I knew where I had heard it before, I would credit the individual, so it's not mine, but it's perfect. What happens to the individual who grows into middle age, eating like a teenager, while leading a sentient lifestyle? That person gains weight, becomes less agile, becomes set in their ways... less likely to make life-saving changes... until there is a crisis. At that point, either the patient makes drastic quality of life changes... or the patient dies. The choice is ours.

Destatis reported fourth quarter German GDP on Thursday morning. That print hit the tape at 0.0% q/q growth... in other words... flat from a third quarter that saw the German economy contract by -0.2% (-0.8% annualized) from the second quarter. While the very definition of "recession" is consecutive quarterly contractions would suggest that the German economy has by the thinnest margin possible avoided such a distinction, one must also understand that sliced in six month increments rather than in quarterly snapshots, that the German economy, the engine of Europe has in H2 2018 contracted from H1 2018. Flatly put, Destatis, in their statement, said Foreign trade did not make a positive contribution to growth in the fourth quarter."

Between Brexit, and the potential that trade conditions with the U.S. do not move in the right direction, there is not a lot of hope that the European economy recovers rapidly. Italy, by the way is already mired in a textbook recession. On that note, Japan's Cabinet Office posted that nation's Q4 GDP on Wednesday night. The Japanese economy did grow... for the second quarter in the last four (such a hot streak), yet printed below expectations. Remember what I said about the hamper? Wonder why there is such strength in the U.S. dollar? Remember that coyote that jumped over me in the middle of the night? You never know who hides in the darkness, close enough to touch.

Happy Valentine's Day. Really, across the whole of Wall Street, what trader has never both fallen in love with Nvidia (NVDA) , only to eventually feel the scorn of an angry lover's tortured vengeance? They say that there is a thin line between love and hate. They say that love and hate both make one vulnerable. Surely, "they" must have been trading Nvidia around quarterly earnings. Remember Thursday, November 15th, 2018. I do. I got caught that day as Nvidia released Q3 earnings and horrific guidance that knocked the stock for a loop. I was short $180 with an expiration date of November 16th. Ahh... the equity exposure risk that comes with shorting puts one thinks will never be exercised come home to roost.

Long story short. I decided to buy the shares at $180, even though the shares had traded into the $140's overnight, and would eventually trade in the mid-$120's. This instead of covering the puts at a loss. I am my own boss, thankfully, a risk manager would have insisted on covering. My skill set happens to lend itself toward risk management. In addition, though painful at the time, nothing, and I mean nothing makes a trader feel more alive than a desperate fight from a position of weakness. Not for everyone. Not advisable. Got out of that one at a small profit but it took a couple of months and certainly not worth the effort required. So, NVDA reports again on Thursday night. Do I venture back? After a January like we just had... no need to. Do we trust any guidance offered tonight? Would you trust the guy selling burnt pretzels outside Yankee Stadium to watch your kid... just for a minute?

Little more than two weeks back, Nvidia cut their own projections for Q4 revenue, and for Q4 margin on weaker than expected sales of the firm's gaming and data center (the cloud) platforms. Not a lot of nice things have been said about the firm since that last earnings call. This week alone, Bernstein, Citi, and Goldman Sachs have all either downgraded the name, or lowered target prices. In fact, over the past two and a half months there have been 26 downward revenue revisions versus zero upward revisions. Expectations at this point are for earnings growth of -63.4% on revenue growth of -22.7%. Do we dare? 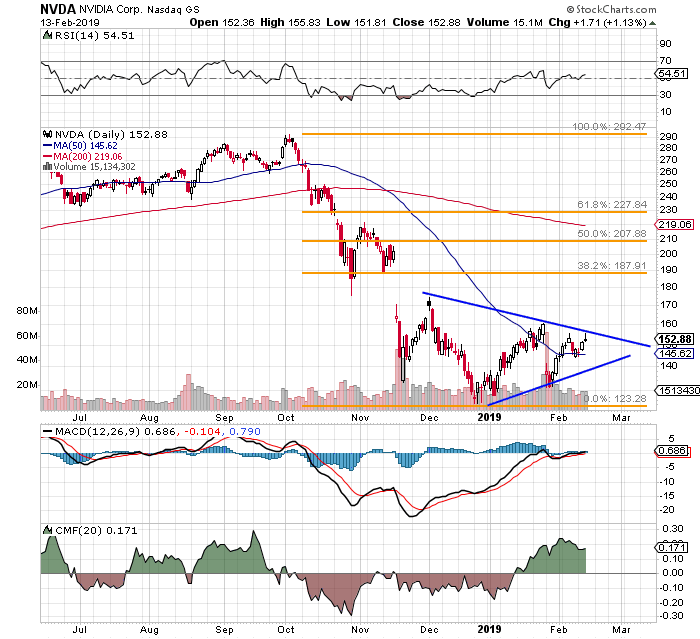 For those bullish, your target would be $188. The closing pennant does suggest that a violent move in the share price is close to imminent. That does not imply direction, but since the warning, money flow has improved, while the name has seemingly based with a series of higher lows. Has Jen-Hsun Huang set the bar low enough for his firm to beat these expectations? My gut says that the negativity is already priced in. My confidence in this gut feeling is not strong enough to warrant an equity stake.

Get an email alert each time I write an article for Real Money. Click the "+Follow" next to my byline to this article.
TAGS: Earnings | Investing | Markets | Options | Stocks | Technical Analysis | Trading | Stock of the Day