Over the past few trading sessions stocks have frittered away a small part of their large gains from last week. The S&P 500 is down 1.2% so far this week and the Nasdaq is off 1.6%. Investors focus is intently around monetary policy as we have heard some more hawkish rhetoric from members of the Federal Reserve this week.

With recession a likely possibility in 2023, thanks to the huge spike in interest rates over past couple of quarters, it is easy to see why markets lack conviction at the moment.

I have to admit I am largely sitting on the sidelines with a nice slug of cash within my own portfolio even though I would not be surprised to see somewhat of a year end rally. New trading ideas are few and far between it seems right now. It is times like these that I like to turn to what insiders are purchasing for starting points for potential trades. In today's column, I will highlight two names I am beginning research on after these stocks were put on my radar by significant recent insider buying.

Let's start with NCR Corp (NCR) . This IT solution provider is known for their venerable ATM network, offers software and services to the banking, retail, hospitality, and telecom and technology sectors. The stock has been hit hard recently after the company announced late this summer that it would separate itself into two independent, publicly traded companies - one focused on digital commerce, the other on ATMs. Investors were hoping for an outright sale of the company to Veritas Capital. 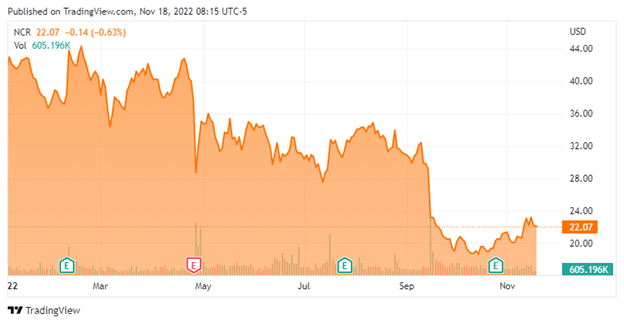 On preliminary review, the stock appears oversold near 52-week lows and NCR looks like a low-key growth at a reasonable price or GARP story. Revenues are on track to rise in the high single digits this year and the stock is priced at just less than nine times forward earnings. One director seems to be signaling there is value here with the shares down by 50% ytd. He has bought over $15 million worth of new shares so far here in November.

Next up is Atlantic Union Bankshares Corp  (AUB) , another GARP play seeing significant insider purchases this month. Four officers of the company including the CEO have purchased nearly $1.2 million worth of new shares so far this month, the first significant insider buying in this equity in over a year. The company operates as the holding company for Atlantic Union Bank that provides banking and related financial services to consumers and businesses. Atlantic Union Bank has 130 branch offices mainly in Virginia but also in Maryland and North Carolina.

There are numerous things to like about this stock. First, it pays a solid 3.5% dividend yield and sells for less than 12 times earnings. The company's footprint is in a growing region in the United States. Rising net interest margins are boosting the bottom line and analysts expect just over $3.50 a share in earnings in FY2023 after around $2.90 in EPS this fiscal year. The stock sells for $34 a share.

The four analyst firms that cover the company have price targets ranging from $45 to $50 a share, which seems reasonable if the bank hits their profit projections in the coming year.

And those are two reasonable valued names in an uncertain market that insiders are voicing confidence around given recent stock purchases.

Get an email alert each time I write an article for Real Money. Click the "+Follow" next to my byline to this article.
TAGS: Investing | Markets | Stocks | Technical Analysis | Trading | Value Investing