Is inflation past peak? Seems obvious. I would even say it is, and I tend to be skeptical. There is one wildcard though. One huge wildcard. Crude oil. This is the space where the surge in consumer prices originated coming out of the pandemic, the epicenter if you will. On the backside of that surge, energy prices have been a macroeconomic ally. That does not necessarily mean that upward pressure from that space is a given. The first half of winter has been mild across Europe and across parts of North America. This is something that we have to guard against taking for granted as we move into the final two months of the season.

Last week the US EIA (Energy Information Administration) in its January 2023 outlook, forecast a minor increase in crude prices for the first quarter following the EU ban on seaborne imports of petroleum based products exported from Russia, which will be effective February 5th. How disruptive this action will be is an uncertainty, but the EIA does seem to think that greater disruption is more likely than the original EU ban on seaborne crude itself, which was enacted in December.

Early on Wednesday morning, in their first monthly report of the year, the IEA (International Energy Agency), not to be confused with the US based EIA, projected that global demand for crude oil will rise to an all-time high in 2023 as China emerges from its Covid-related policies of the past three years. The agency sees demand for crude rising 1.9M barrels per day to an all-time high of 101.7M bpd, stating that the now "well supplied" global market for crude could "quickly tighten" as sanctions, particularly the above mentioned EU ban on refined Russian oil products, take full effect.

I remain long Chevron (CVX) , Occidental Petroleum (OXY) and Halliburton (HAL) across the energy sector. That has not changed. I also trade in and out of APA Corp (APA) , the old Apache Oil, as a means of increasing and decreasing exposure. I currently have no APA in inventory, but that changes on the daily. SLB (SLB) , formerly Schlumberger, reports this Friday morning. Given that firm's international profile, what SLB CEO Olivier Le Peuch has to say in response to, and around those results could shed significant light upon the actual medium-term outlook for global demand.

This (Wednesday) morning will bring traders, investors, Romans, and countrymen more macroeconomic results than they could ever wanted to peruse at one time. In addition to December Retail Sales and December Industrial Production, the Bureau of Labor Statistics will put December PPI to the tape. All three are expected to show either outright monthly contraction or at least a significant deceleration. You'll see all three prior to the opening bell at 11 Wall Street. Then at 10:00 am ET, the Census Bureau will release their number for November Business Inventories.

All four of these reports impact GDP. The Atlanta Fed will have to revise its GDPNow model later this morning, which will impact financial markets. Ahead of these numbers, the Atlanta Fed still shows Q4 running at growth of 4.1% q/q SAAR, but this estimate has not been updated in eight days.

On Tuesday, the Empire State (NY) Manufacturing Survey for January was just the latest slice of macro to print on the low side of awful. The Federal Reserve district of New York manufacturing survey printed well below consensus at -32.9. January was the seventh month of nine that the New York area showed headline contraction for its manufacturing sector. The New Orders component, which is the most important component in any manufacturing survey, printed at -31.1, down from -3.6 in December, while components such as Shipments and Unfilled Orders also made like peas rolling off of a table.

Perhaps most startling, as I scan the various components, is the still growing number of employees, but the sudden and large contraction in the average employee workweek. That's always where weakness in labor markets begins. The Fed's Philadelphia district will go to the tape with their January survey on Thursday morning. Philly is considered by many to be the most important regional manufacturing survey in the nation.

Tuesday was a tough day to figure out. Yields and US dollar valuations moved higher, and this pressured equities early. Both yields and the US Dollar Index are moving lower on Wednesday morning. On Tuesday, though, the indexes, for the most part, moved slightly lower with two exceptions. The Dow Industrials took more than a slight hit (-1.14%) led lower by both Goldman Sachs (GS) and Travelers (TRV) , while the Nasdaq Composite extended its winning streak to seven consecutive higher daily closes.

The sector SPDR ETFs were almost evenly split for the session, with five moving higher, and six moving lower. None of the 11 moved more than 1% for the day. Winners edged losers at both exchanges, 8 to 7 at the NYSE and 12 to 11 at the Nasdaq. Advancing volume took a 60.3% share of composite Nasdaq trade and a 49.6% share of that metric for NYSE-listings. Trading volume increased for names listed at both exchanges in aggregate, but I don't think there is a serious volume based take-away to be had here. 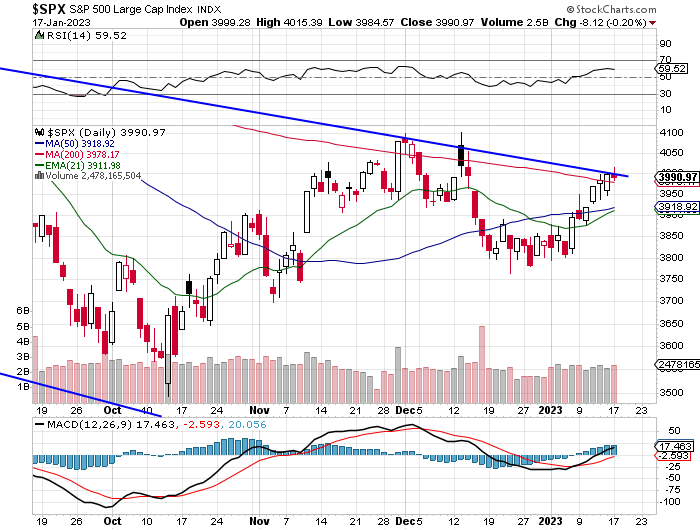 Note that though the S&P 500 spent the entire session above its 200 day SMA (simple moving average) on Tuesday, it has stalled at the 4,000 level. What comes of this is hard to say. A swing-traders' golden crossover of the 21 day EMA over the 50 day SMA could provide just enough algorithmic boost to punch the index through 4,000 and put some space between the last sale and the 200 day SMA. That would trigger an industry-wide increase in long side exposure. That said, all of that macro you'll see ahead of this morning's opening bell will probably make this decision easier for us.

We have been warning of the likelihood of an attempted spring offensive for some time. State newswire TASS reported on Tuesday that Russian Defense Minister Sergei Shoigu provided a timetable to increasing national troop levels following what has been a year of consistent battlefield losses for the former superpower. The Russian military will increase active duty forces to 1.5M individuals between 2023 and 2026, up from today's 1.15M, and what was an even 1M ahead of the unprovoked invasion of Ukraine.

Russia is set to create new military districts around the cities of Moscow and St. Petersburg and a new army corps in Karelia, which is on the Finnish border. Russia will also set up "self-sufficient" units in occupied territories within Ukrainian borders, which I guess means that Moscow has no idea if these units can be properly resupplied.

I know that I told you that I was reducing my exposure to the defense contractors, as these were easily my top performers for 2022, and I have. That said, even with Northrop Grumman (NOC) trading well below its 200 day SMA and Lockheed Martin (LMT) set to pressure that level, I would be slow to completely exit this group. My intention is to rebuild these longs at reduced prices, which should not be difficult given where they now trade. Tough situation.

The federal budget is not likely to be resolved in a defense friendly way if and when it is resolved. That said, the world is a very dangerous place, full of dangerous people in positions of leadership. Allied and domestic stockpiles are lower than they need to be.

- Sales of Pfizer's (PFE) Covid anti-viral Paxlovid have been lower than projected.

- The Centers for Disease Control and Prevention and the FDA both announced late last week that they plan to investigate a preliminary "safety signal" from the CDC's Vaccine Safety Datalink (VSD) system that monitors vaccine-based data from nine US hospital systems. The data from the VSD shows a higher instance of ischemic stroke in people aged 65 and older in the US within three weeks after vaccination with the Pfizer/ BioNTech (BNTX) bivalent booster than in weeks three through six.

- I exited my small stake in Pfizer on that news.

- Moderna (MRNA) popped on Tuesday after the company reported that its experimental RSV vaccine proved 83.7% effective against that respiratory virus for folks aged 60 and above.

- I have replaced Pfizer with a small position in Moderna on my book. It's a place-holder for now, as the two stocks do not accomplish the same goals for investors. Pfizer yields 3.56%, while running with a beta of just 0.5. Moderna does not pay a dividend while existing with a beta of 1.2. Different animal completely. Still have Eli Lilly (LLY) on the pad. May add there or initiate Merck (MRK) as a low-beta income type name if either were to come in a bit. AbbVie (ABBV) , with the sloppy balance sheet and all, does fit that bill, and has already come in almost 9%. Food for thought.

(Lockheed Martin is a holding in the Action Alerts PLUS member club. Want to be alerted before AAP buys or sells LMT? Learn more now.)

Get an email alert each time I write an article for Real Money. Click the "+Follow" next to my byline to this article.
TAGS: Investing | Markets | Oil | Stocks | Technical Analysis | Trading | Defense | Pharmaceuticals