I've been waiting. For so long I had wondered. I had wandered. Sure there was the occasional "Hey, Sarge" from the other side of the subway platform, or the stray question that came from construction workers or drivers once they got me in the car, but mostly the people had become numb. When they would care once again? Would they care once again? There had once been a time when being introduced to new people, that once they heard "Steve works on Wall Street", there would be a pause.

After that pause, the new acquaintance would either quip "Got any tips?", or they would seriously ask about a stock they cared about, as if we can all answer intelligently any question about any stock. Only Jim Cramer can do that. That's why he bats clean up in our industry. The rest of us do not know something about every single stock.

My point is that by 2019 it had been a long time since the average person gave a darn about Wall Street or about individual stocks. For the most part many folks, I believe, had received a financial punch in the nose in the late 1990's, and then again a decade later. Some were damaged beyond caring. Some went through a dulling of intellectual curiosity after passive style investment grew popular.

After having briefly felt important, those of us who grew up figuring out earned run averages for our whole little leagues and being accused by nuns of cheating on math tests because we could slow our brains down enough to show the work on math tests faded back into the background. By the way, teachers hate test sheets that show nothing but answers, even if you take the test in front of them in an isolated room.

The point is that suddenly, and I mean this is like lightning, the folks are back. The S&P 500, Dow Jones Industrial Average, and Nasdaq Composite all landed at record high closing prices on Thursday night. Yet again. A December, a year to remember.

I appeared on the Claman Countdown at the Fox Business Network on Thursday afternoon, the anchor... (the great) Liz Claman asked me what "one" stock I would like to own over the next 10n years. My mind raced. My brain dumped words that poured out. There are so many stocks that I want to own for so many good reasons. Just one? I rattled of a quick list including Marvell Technology (MRVL) , Zuora (ZUO) , ViacomCBS (VIAC) , CVS Health (CVS) , United Technologies (UTX) , Splunk (SPLK) , and Nvidia (NVDA) . That was non complete list by any stretch. These are all names that I trade in and out of.

I dug deeper, I thought about portfolio managers watching the show, I mentioned Mastercard (MA) for the steady double digit sales growth, for their traction in the business to business and international spaces, for their operating margin, for their relationship with the Apple (AAPL) Card, and for their large buyback program. At $297 a share though, that one might be tough on the retail investor, and the citizens are why I am here.

My mind then turned to AbbVie (ABBV) . Why? Simple. Retail investor affordability. The single digit forward looking valuation (PE), the 5.3% dividend yield, the way that management has identified the coming expiration of the Humira patent in 2023, and addressed this issue head on through the acquisition of Allergan (AGN) , which may close as soon as February... as a way to mitigate the negative impact to revenue and cash flow at that time. Everyone loves a fighter, at least I do.

I had spoken so fast, as my mind raced, trying to provide viewers with my honest opinion. I was not sure how it came off. My wife texted ... "you on drugs?" Of curse not, and I never have been. Then it happened. Twitter. Texts from others. E-mails from contacts. Then even phone calls.

The people care. Big time. I have not had a reaction like this to a television interview in quite some time. Viewers had apparently gone for something to write with when the interview began. When I spoke quickly, they could not get it all down. Others mentioned having DVR'ed the show. Relatives, asking about their stocks. Even financial advisers, just to chime in with their own opinion. It seemed to happen overnight. People watched. People listened. People cared. About what? Individual stocks.

Market top? Some might say. Then again, shouldn't the people care? Have some mostly missed an 11 year bull run due to fear, or an inability to save for so many of those years as the underlying economy struggled? Regardless, the individual is back, and they are focused. This may be a contrary indicator. Then again with the personal savings rate as a percentage of disposable income at sustained levels not seen since the early 1990's, there's a chance that retail investors are just getting started. What's that worth? I don't know, but I like it.

Anyone else notice the numbers released by Dealogic for investment grade U.S. corporations financing their credit needs in Europe, denominated in euros rather than in U.S. dollars? Year to date, these firms have tapped European debt markets for the equivalent of $129 billion in euros versus just $56 billion in 2018, and it makes a lot of sense doesn't it?

As I write this early morning love note, the U.S. 10 year note yields 1.94%, German 10 year paper yields -0.22%. The Fed is expanding its balance sheet through the purchase of short-term debt, T-Bills, meant to ease liquidity concerns, but not meant as an economic stimulant. The ECB is also expanding the balance sheet once again, after taking a hike for nine months. The ECB is trying to stimulate the economy in the single currency zone through the purchase of both sovereign and corporate paper.

This behavior is in no way wrong or unethical. This is simply solid corporate execution, that helps keep down borrowing costs, and likely improves gross margins. The danger might come in the taking down of more debt than appropriate due to the ease of access, and then at that point the music stops. Until then, have at it.

At least not yet. On Thursday, the Department of Labor reported 234K initial jobless claims form unemployment insurance. A second consecutive week that this print landed well above expectations, moving the four week moving average for this data-point up to 226K. Don't get me wrong, I know that the labor market is still strong and that this particular item has printed below 300K (which used to be a big deal) for something like 249 consecutive weeks (don't quote me, I'm not actually counting), or close to five years.

What I do think might be noteworthy would be this week's print for continuing claims, a number that runs a week behind initial claims, and normally does not draw much attention. At 1.722 million, that line now stands at the highest level seen since August. The sky is falling? Not at all. Worth keeping an eye on? Certainly. With unemployment at incredibly low levels, any wiggle in trend will create questions concerning sustainability. Losing jobs means losing the consumer. Losing the consumer means everything.

About a week and a half ago, we heard about the "Internet of the Future", the investor event where Cisco (CSCO) laid out their plans for new products around the national rollout of 5G technology. These plans would include new, more powerful routers, new networking silicon architecture to build those routers on, better optics, and improved software offerings.

On Tuesday, Barclays analyst Tim Long (5 stars) upgraded this name to Overweight from Equal Weight, while raising his price target from $47 to $53. Long based his change of heart on valuation and on the innovative changes that the firm announced back on December 11th. You may recall that back on December 12th, David Heger (also 5 stars) of Edward Jones also upgraded CSCO in the wake of that event. 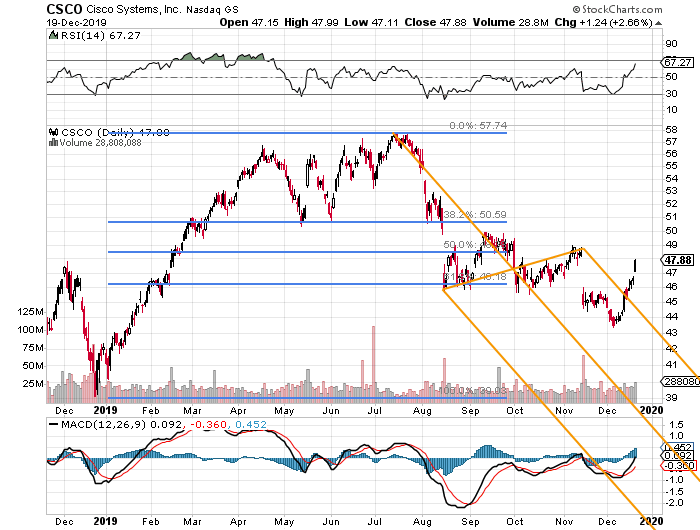 One quickly sees that CSCO simply changed trend in response to it's investor day earlier this month after what had been really an unsustainable looking sell off. Relative Strength, the daily MACD, across many metrics the stock just looks better. This has not been one of my better names in 2019, but at least this recent move puts us back in the green.

- Panic Point: $45 (just above net basis, not letting this one go red again)

Get an email alert each time I write an article for Real Money. Click the "+Follow" next to my byline to this article.
TAGS: Investing | Markets | Options | Stocks | Technical Analysis | Trading | Semiconductors & Semiconductor Equipment | Technology