It's been a long time since I rock and rolled.

It's been a long time since I did the stroll.

Let me get it back, baby, where I come from.

Can the shares do the same? This (Tuesday) morning, Kohl's (KSS) released the firm's second quarter financial results. As a shareholder, there is no way to sugarcoat this. I have been concerned. The firm reported adjusted EPS of $1.55, that was 12% lower than the $1.76 reported for the same period last year. The firm posted revenue of $4.43 billion. That number presents as a 3.1% contraction from Q2 2018. The fact is that Kohl's beat industry expectations on both the top and the bottom lines.

The early focus, and why I think the shares traded higher in pre-opening trade more so than those headline numbers, was the print for comparable sales. That number printed at pedestrian growth of 2.9%, crushing consensus expectation for contraction. The firm infers that there has been a strong start to the "back to school" season that has continued on with these better than thought comp sales. This in my view outweighs gross margin that fell to 38.8% from 39.5% last year. Most importantly, Kohl's reaffirmed full year earnings guidance of $5.15 to $5.45 versus consensus of $5.24.

Obviously, the retail space remains mired in a position of peril. The mall appears dead. Fortunately, Kohl's stands alone, and is not part of "the mall." Walmart (WMT) showed last week that through scale already in place, channels of distribution, and an aggressive embrace of the omni-channel environment that this type of retailer can effectively compete. That makes tomorrow's (Wednesday) results for Target (TGT) interesting as well. Tariffs created by the trade war between the U.S. and China are obviously a challenge here, and as I write this missive, KSS CEO Michelle Gass just went there in the conference call. That is precisely why market watchers saw the share price move from positive to negative prior to the opening bell.

The firm continues with programs to better control expenses, as well as create a rotation of in-store inventory in an attempt to implement an aura of "newness" for the typical Kohl's shopper, 80% of whom are female. The firm also makes mention of better in-store utilization of square footage through a deal with Planet Fitness (PLNT) , as well as the now broad implementation of the Amazon (AMZN) returns program that should incrementally contribute to performance through increased foot traffic. 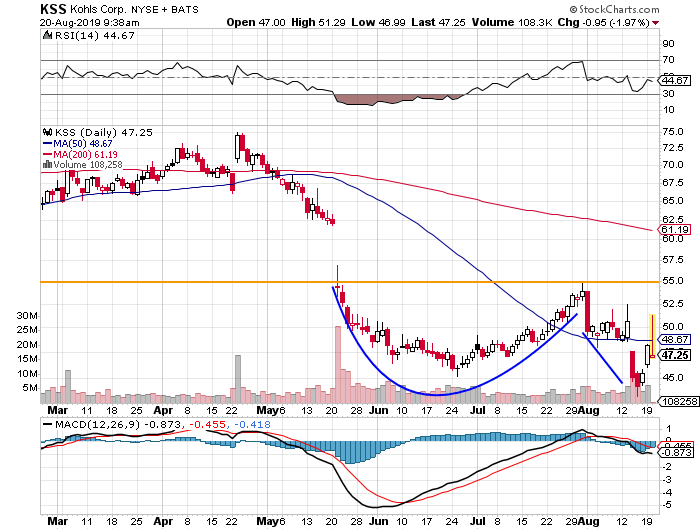 After what this name has gone through, it becomes key for the shares to take and hold the 50 day SMA, currently $48.67. If that spot can be taken, the target price becomes $55, which is where the cup formed from late May through late July peaked.

I am long this name, and have a number of options trades in play that I have used to reduce net basis. I need the high $49.67 to break even. What am I going to do? Well, I will cut at least some bait should the shares approach the low of last Thursday, just above the $43 level. Other than that, these shares pay a dividend of $2.68 annually. That's a yield of 5.6%.

I think that in this environment for retail that there is a place for this name if not on my active book, at least as a dividend holding. On that note, the firm will pay a quarterly dividend of $0.67 to shareholder of record on September 11th.

It's Time for Some Holiday Trading

The market is likely to have a positive bias on Wednesday and Friday but that doesn't mean it will be easy to find good trades.