What was that? Unless you were in the name, you may have been busy trying to save your own tail. If you were in the name, I am told it was quite painful. I speak of Intuitive Surgical (ISRG) . The stock sold off 14.34% on Friday, closing out the session and the week at $252.34, which put the shares down 31.7% from the late December highs.

After Thursday's closing bell, which was the day that Fed Chair Jerome Powell took a torch to US financial markets, Intuitive Surgical released the firm's first quarter performance. The firm posted adjusted EPS of $1.13 on revenue of $1.49B. Both numbers beat Wall Street's expectations, while the sales number was good enough for growth of 15.5%. Still, though that $1.49B did beat Wall Street, there is a clear deceleration in the pace of growth becoming quite visible. On a year over year basis, revenue growth scored growth of 72% for Q2 2021, followed in the quarters since, with growth of 30%, 17%, and then this 15.5% for Q3, Q4 and Q1, respectively.

Who is Intuitive Surgical?

The short answer? A healthcare equipment and supplies company. The longer answer? The firm develops, manufactures, and markets the da Vinci surgical system and the Ion endoluminal system. These products and associated services enable physicians and healthcare providers to access minimally invasive care. The firm's systems consist of a console, a vision system, and proprietary instruments. Da Vinci itself consists of five categories... da Vinci surgical systems, da Vinci instruments and accessories, da Vinci Stapling, da Vinci Energy, and da Vinci Vision. The Ion endoluminal system reaches into diagnostic procedures, including minimally invasive biopsies in the lungs. You really did want the short answer in the first place? Intuitive Surgical is a robotic surgery company/pioneer. Got it?

Some of the internals seem innocent enough. Worldwide da Vinci procedures grew 19% over the same quarter one year ago. The firm placed 311 da Vinci Surgical Systems, up 4% from Q1 2021. The firm was able to increase the da Vinci Surgical System installed base to 6,920 systems, growth of 13%. The firm even increased its 2022 forecast for procedure growth to 12% to 16%, from 11% to 15%. So, why the meltdown? The firm, on Thursday... spoke of their inability to meet customer demand, and "on-time" delivery performance that was relatively poor due to constraints on supply chains. Then the firm spoke of inflation pressure margins.

To top it all off, on the call, management acknowledged that due to ongoing pandemic conditions, patients have continued to postpone medical procedures. Just peer around the globe and take a look at what's going on inside of China, and you know not only that this is probably still true globally, but the potential exists for these problems - pandemic and supply chain - can and will still impact normal operating procedures in the US.

Let's move on. Total assets add up to $13.678.4B. This includes a minimalist entry for "Goodwill" and no entry for "Other Intangibles" which I like to see. Total liabilities less equity are just $1,521.5B. Guess what? No debt at all on this balance sheet. Not one penny. Talk about impressive. This firm can pay its bills moving forward, and probably doesn't need to tap debt markets, but is in good shape should the need arise. This balance sheet passes the Sarge test with flying colors. A plus.

The firm has been hurt and continues to be hurt by the effects of the pandemic. No way to predict how that plays out and for how long it plays out. I love the way the firm appears to have managed itself. The only thing I really don't like about the stock is the valuation. At 51 times forward looking earnings, a stock has to show rapid and accelerating sales growth in order to sustain such valuation. In this market, PE numbers like that coupled with growth numbers like this, even if it is not their fault, makes these shares a target. 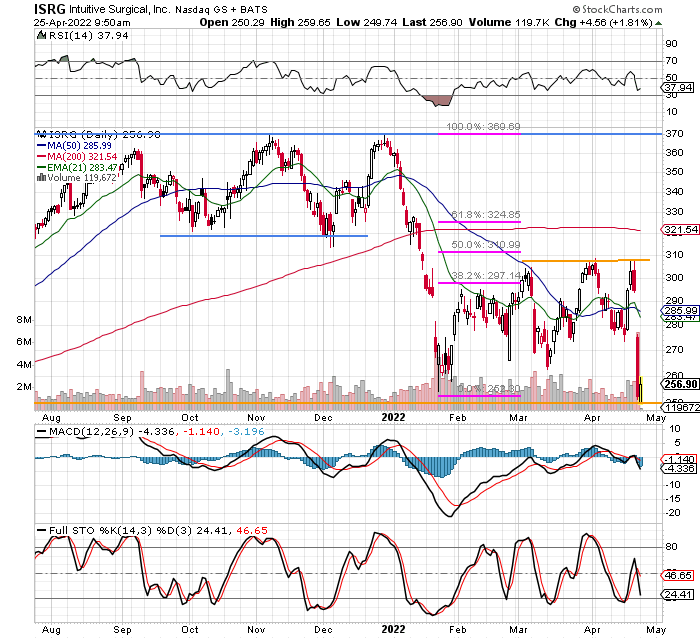 Readers will see that ISRG had been in a flat basing pattern up until the January selloff. From there, the shares found support around where they trade right now, retraced about 50% of the entire selloff, and formed a new base with resistance up around $309. I like the stock. I really do. My indicators show these shares as having been weakened, but not technically oversold. In a different environment, I would advocate an incremental entry into this name (heck, I'd more than advocate). In this environment, with a valuation that the algorithms will target, I think I'll be more risk averse in my approach.

Notes. The trader pockets $3 should the share close above $250 this Friday. The trader may have to pay $250 per share (net basis: $247), but had to purchase protection at $240 just in case the trader gets his or her face ripped off. Max loss by Friday would be $7. The trader has to be comfortable going into the weekend long the shares at a net basis of $247 in order to move forward with this idea.

Get an email alert each time I write an article for Real Money. Click the "+Follow" next to my byline to this article.
TAGS: Earnings | Investing | Stocks | Technical Analysis | Trading | Health Care Equipment & Services | Healthcare | Coronavirus