Ever see an American flag with tattered ends, or some kind of stain on the fabric, yet still displayed on a vehicle or in front of a business? Ticks me off. Should tick you off too. Either be proud enough of that flag to take it down when it becomes damaged, or don't display that flag in the first place, for through your laziness... you have already proven yourself unworthy of bearing my colors.

Like most human beings, I have personal thoughts and preferences when it comes to politics. I am sure that I am quite capable of espousing an unwelcome political bias that could damage my ability to be objective across any number of issues. With that in mind, I make great effort, to not "go there" publicly, which is no easy task. My mission? To simply address the market or economic impact when news events created within the sphere of politics become drivers elsewhere. With that said, I will move on with this Wednesday morning Market Recon, but let me tell you this...

You embarrass "Old Glory", and I won't be the only one who won't forgive you. Everyone on both sides of the aisle better check their aggression at the door, and get real sober real fast. There is much at stake beyond merely beating the opposition.

Around midday Tuesday stocks had been meandering lower. I was on my way uptown on the Seventh Avenue line. I came to one of the stations that does have a cell signal. Quickly, I opened my market app. The Dow Jones Industrial Average was down about 40 points for the day. A few minutes later, my train gets to Times Square, the Dow is now 125 points lower. I walk the one block up to the doors of the Nasdaq Market Site... bang, down more than 180.

Equity markets had been higher on Tuesday morning than they were on Monday night. First the president sounded tough on both trade with China, as well as on Iran from the UN General Assembly. The markets wobbled a bit, but managed to stay in the green. Then news broke. Markets sold-off relatively hard on greatly increased trading volume. Safe haven was sought in Treasury securities, Gold, and in dividend paying equities. Speaker of the House Nancy Pelosi would address the nation after the close, and the drums of impeachment were sounding. Pelosi said "The House of Representatives is moving forward with an official impeachment inquiry, the president must be held accountable. Nobody is above the law."

The claim form the left is that the president urged Ukrainian leadership to investigate the Biden family on corruption concerns while withholding a military aid package. This comes after a whistle-blower (who incredibly was not a witness) raised awareness of a telephone conversation between President Trump and Ukrainian President Volodymyr Zelensky. President Trump, for his part, had already announced his intention to release an unredacted transcript of that phone call on Wednesday (today) ahead of Pelosi's address. Democratic party leaders have also requested the ability to see this whistleblower report. Bloomberg Radio is reporting through the wee hours that the administration has agreed to release this complaint to Congress.

Common sense would dictate that these matter could possibly conclude within hours if there is no "smoking gun" type evidence apparent. Common sense, from my point of view however... can be the rarest of virtues in our nation's capitol.

One must understand that if proceedings can be wrapped up quickly, if once again there is no "there" there, that even if the House somehow passed Articles of Impeachment, the Senate would not convict. Hence, limited market impact. On the other hand, should the inquiry linger, and that is starting to sound like the intent, this likely pushes out any ability to successfully negotiate a trade deal between the U.S. and China, as President Xi may just wait to see if a softer road for his side in these dealings is just around the corner. That damages the economy, as well as large cap equities and would have to be priced in. Then, there would be real possibility that the leading candidates for both major parties suffer substantial political damage going into the 2020 electoral season. This will in my opinion, shake national morale, and ultimately consumer confidence. If, markets start at some point to price in a socialist president, the magnitude of the subsequent financial market crash, I would fear to even ponder.

One must also understand that we have never gone through this before. In my lifetime, impeachment proceedings have been brought against both President Nixon and President Clinton. Nixon resigned ahead of possibly being convicted. Clinton was actually impeached by a Republican controlled House, and then not convicted by a Senate comprised of 45 Democrats, who all voted "Not Guilty". As a two-thirds majority is required in the Senate, that was the end of that. In addition, both Nixon and Clinton had already been reelected. Clinton emerged from those events politically strengthened it should be noted. Should these proceedings linger, this will be the first time that a reelection campaign is run under such conditions, meaning that the unpredictable becomes that much more predictable. We all know how much we like uncertainty.

Nothing tamps down volatility like cash in the portfolio. Under performing to the upside will never feel as bad as market performing (or worse) to the downside. When opportunity knocks, nothing will feel as comfortable as already having available dry powder, opposed to having to sell something in order to buy something. Just food for thought.

I was going to opine on the departure of WeWork co-founder Adam Neumann from active leadership at the firm. I had already stated my intention weeks ago to avoid the stock when and if it ever came to the equity marketplace, and you know what? It will not trade publicly anytime soon, and will not impact anything I'm involved in right now. I am no longer involved in the investment banking game. Hence, I don't care.

In recent days, a couple of names that have been winners for the portfolio have come under some pressure and now face testing at what looks to be technical support. As I have stated on The Claman Countdown (The Fox Business Network), I have raised cash of late through reduction of equity exposure. Both of these names had been reduced from full positions to 50% exposure levels. I still like both longer-term, but technically, some attention here is required. 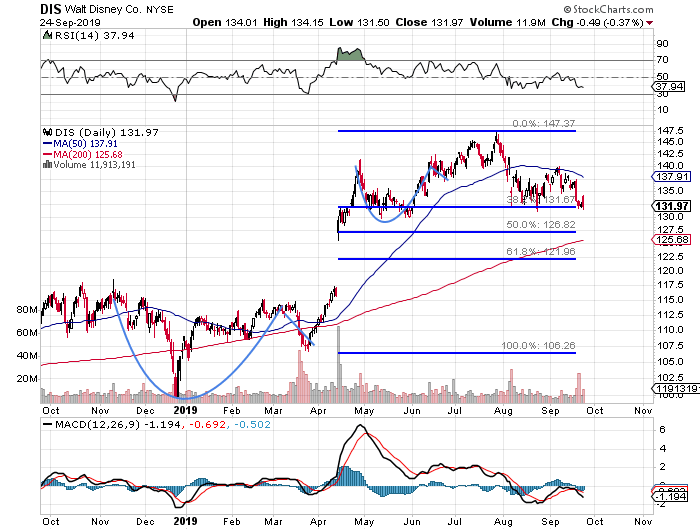 The Walt Disney Co. (DIS) currently tests a 38.2% retracement of the move off of the March lows. Bear in mind that the gap created by last April's Disney Plus announcement has never been revisited, and some technicians believe that all gaps must eventually fill. I am not quite willing to go there just yet, but the Fib level cracks and prices close to $126, or even $121 become possible. Relative Strength is no longer an ally, and the daily MACD quickly tells the chart watcher that something is wrong. I'll tell you what, I see not just a piercing, but visible resistance at $131, and I will take off another leg, and reduce exposure to somewhere between 25% and 37.5%. (I tend to do things in eighths. Old habits.) 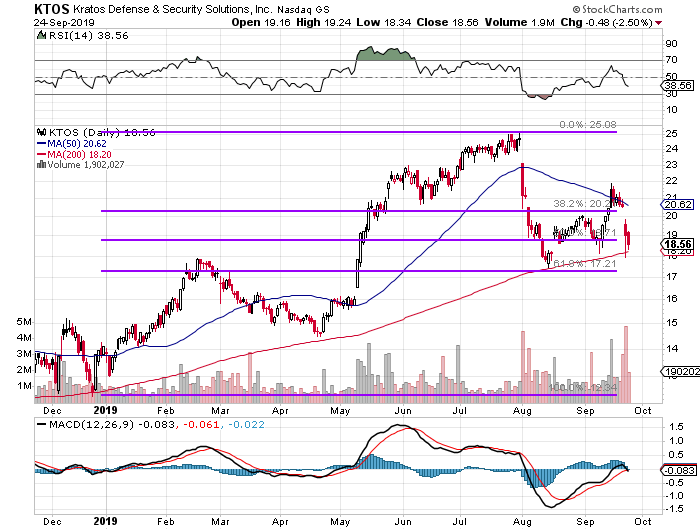 Kratos Defense (KTOS) is another name where I have reduced exposure to 50%. These shares are under pressure after missing out on a hyper-sonic weapons contract that went instead to Northrop Grumman (NOC) . There are two important support levels for investors to keep an eye in here. The first would be the 200 day simple moving average ($18.20). This level has been tested twice in recent days. I sell nothing more unless this line cracks.

The second level would be the 61.% retracement of the December through late July move at $17.21. This level has been tested as recently as early August. These are where the bus stops are. Now, we just have to decide if the bus is still headed in that direction.

Get an email alert each time I write an article for Real Money. Click the "+Follow" next to my byline to this article.
TAGS: Investing | Markets | Politics | Stocks | Technical Analysis | Trading | Defense | Media | China