I know we're not in the business of picking bottoms. It doesn't work often. Heck, it basically never works, but calling bottoms comes after the fact. Immatics (IMTX) isn't trading at its low. In fact, it's more than 10% above its low. It also remains about 50% off its high, so nibbling here may not be a bottom, but I'd hardly call it chasing.

This stock is a bit boy who cried wolf for me. A few times I felt we made a bottom and appeared ready to turn higher. On the plus side, those levels have held, but each push higher has been met with resistance. The company did receive a Buy rating with a $17 price target from Graig Suvannavejh at Goldman Sachs last week. While I generally cast a bit of doubting eye in terms of upgrades and analysts, Graig has worked directly in the field with AbbVie (ABBV) and Biogen (BIIB) , with a Master's in Biology and a Ph.D. in Neuroscience, so I tend to give his view some benefit of the doubt. That being said, Goldman Sachs and SVB Leerink, the two firms with $17 price targets, were both advisors on the Immatics deal. It wouldn't be fair not to mention it here.

The stock has made a series of higher lows during the month of September. Earlier in the week, it pushed to near its 50-day simple moving average (SMA) before it was turned away. Some might view that as a false breakout. I wouldn't necessarily disagree, but it gave us information as well. That open and close work as support and resistance of the prior three days. Today, shares have pushed above the closing highs of the month. If we can hold these levels around $9.70 to $9.75 into Friday's close, this is the type of chart that will grab the attention of momentum traders. 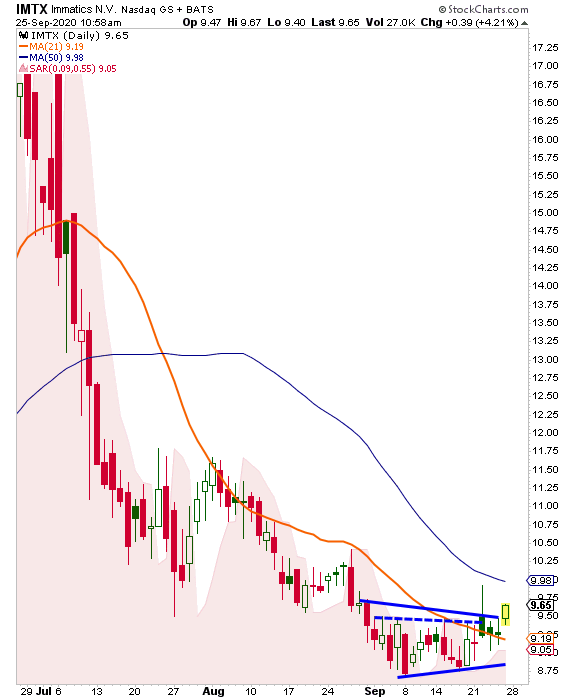 We still have the 50-day SMA waiting above, but that level really hasn't mattered despite what I just said. Yes, we probed near it earlier this week, but that SMA hasn't come into play at all for months. If anything, the 20 or 21-day SMA matters more and we're now trading above it.

I still find the market a bit jittery as our surges higher are now being met with swift selling a day or two later. The knock-back effect on momentum stocks has been swift and painful when it occurs, so I want to scatter my portfolio with a few names I think have limited downside, but could catch some momentum.

Speaking of momentum, keep an eye on SuRo Capital (SSSS) as Palantir gets ready to kick off trading next week. SSSS holds pre-public Palantir in its portfolio of private names. If shares get above $13, they could open up to higher levels. I wouldn't expect much more than $15 because Palantir isn't a huge portion of SSSS's portfolio, but keep this one on your screen.

(AbbVie is a holding in Jim Cramer's Action Alerts PLUS member club. Want to be alerted before Jim Cramer buys or sells ABBV? Learn more now.)

Get an email alert each time I write an article for Real Money. Click the "+Follow" next to my byline to this article.
TAGS: Investing | Stocks | Technical Analysis | Trading | Biotechnology | Pharmaceuticals