Heard about it all day. It would seem to the more than casual observer that markets sold off on Tuesday in response to trade "jitters", and growth "fears." True, the winning streak came to an end for the broader equity indices. True, declining issues trounced those that advanced, while down volume beat up on up volume. Truth about that volume was that it was no heavier.. in fact it was at the end of the day, even lighter that what we had seen as stocks had moved higher through the early days of April. Yes, there was some reaction to the evolution of the environment provided, but institutional participation, in my opinion, was not obvious.

Remember that commuter train form the Tuesday Recon? It sits. Barely moved at all. Headlights shining through the darkness of the uncertainty, drawing the painful attention from those forced to wait. Minimally visible for those wishing to board are just a few mist-like raindrops. They scatter a few in front of those high-beams. Mildly entertaining is the childlike recess of the suddenly empty cranium, while stealthily increasing the wet misery that is personal frustration.

I remember the football helmet that I wore as a youth. There was a sticker on the back with very small lettering. It read something to the effect that the helmet was not meant for use in tackle football. Maybe they thought that we could wear those helmets as study aids or perhaps that they helped with digestion. More likely, they just did not want to be sued as some kid somewhere would inevitably be injured wearing one of their helmets.

We knew there would be some tension over trade. We spoke about the Trump administration's targeting of the EU for a rough $11 billion worth of goods to face a tariff upon import into the U.S. Certainly aggressive, even if not that significant in size, to pick a new fight at a time like this. Does that mean the deal with China is nearly imminent? Does this mean that such a deal is further away than many believe? That would not surprise me one bit. Does this simply mean that this administration does what it thinks it should with no connection to be made between the two? That would not really shock this kid either. I'll tape on the foil, and pull that jersey over your head either way.

Now for those "growth concerns." Well, duh. Straight from the folks who have never told us anything that we had not already figured out for ourselves, comes another cut to the outlook for global GDP. Way to go, IMF. Gee whiz. Are these guys ever ahead of anyone? Wow. The IMF did explain themselves in ratcheting global expectations for growth down to 3.3% from 3.5%, a cut that included reductions across most of the developed world. They clearly worry about tension over trade, tighter financial conditions, and increased political uncertainty. Just as clearly, economists at the IMF must read the newspaper. Probably every single day. Dedication. Motivation.

Fear not, my young friends, not only does the IMF warn the planet about this slowdown in growth already being felt to a significant degree across many economies... they also know just how to remedy the situation. You're going to love this. The IMF is recommending that countries should resolve differences on trade, and even better, that they use both fiscal and monetary policy in order to counteract this slowing trend. Eureka! Why didn't anyone else think of this? Easy peasy.

Think about this, gang. You, with the eleventh grade education... you figured most of this out over breakfast. In February. These folks are high profile economists, and this stuff is reported by the media as news. Sometimes, you've just got to shake your head.

- The BLS released their seasonally adjusted data for February job openings on Tuesday. True, the 7.09 million open positions printed in significant decline from the January print of 7.625 million. Also, true, even in February, those open positions outnumber folks looking to work by 876K. So... not yet an honest worry, but something that can not be allowed to turn into trend. Or is it? Back out of the seasonal adjustment, and the February JOLTs number becomes 6.7 million, down from January's close to 7.5 million openings. Most people I know don't factor seasonal adjustments into career planning and household budgeting.

- Probably more important to focus on than the FOMC Minutes on Wednesday, barring something bazaar in those minutes, will be the impact of energy prices on headline March CPI, the midday public appearance that Fed Gov. Randal Quarles will make in Washington, the grilling of several large bank CEOs before the House Financial Services Committee, and the quality in the auction as the Treasury Department issues $24 billion worth of 10 year paper... Just to name a few.

- Shares of Apple (AAPL)  closed on Tuesday afternoon at $199.50, after trading as high as $202.85 mid-session. I am long the name as I know many of you are. For those with an interest in such fun games as Trivial Pursuit, AAPL needs to see $212 in order to recapture the $1 trillion level for it's market cap.

- Saudi Aramco, the planet's most profitable company raised $12 billion on Tuesday evening. That figure was increased from $10 billion after more than $100 billion in orders flooded the market for these securities. Talk about bid to cover. This debt was issued across five different maturity timelines, and clearly demonstrates at least to me, a lack of investor concern for the future health of demand for fossil fuels as energy markets develop. Interestingly, Saudi Aramco is able to borrow large funds more cheaply than is the Saudi government, but not at a discount to other large producers such as Exxon Mobil (XOM) .

I trashed the firm in articles written quite a while ago. I had not really thought of them since. The shares had crashed in slow motion, taking years to give up most of their value, until bottoming with the broader markets in late December. By early March even that rally in this name had started to melt. Yes, all of retail sold off over the first two weeks of March, but the move was sharper, and the taste quite bitter for shareholders of Bed Bath & Beyond (BBBY) .

The calendar read March 26th, Suddenly, a story in the Wall Street Journal reported that the company's entire board had been targeted by activists. Two days later, the firm lays off 150 employees, as the firm makes clear it's intent to revamp the websites, slow down brick and mortar expansion, and review leases currently in force. Last week, Morgan Stanley upgraded the name to Equal Weight, and "jacked" their price target to $20 from $13.

Tonight? Earnings. Industry view is for EPS of $1.10 on revenue of $3.33 billion. In other words, that is EPS of -25.7% on revenue of -10.2% year over year. Help me, Obi-Wan. By the way, right now, the analyst community in consensus looks for full year 2019 revenue of $12.03 billion, and full year 2020 revenue of $11.75 billion. Not good. The shares trade at a low multiple. Why? The shares trade at a negative PEG ratio. That's why. Shopping in the stores is a horrible experience. You play this game, and you are betting on the activist investors having an oversized positive impact, and certainly not on the management that had already been in place. 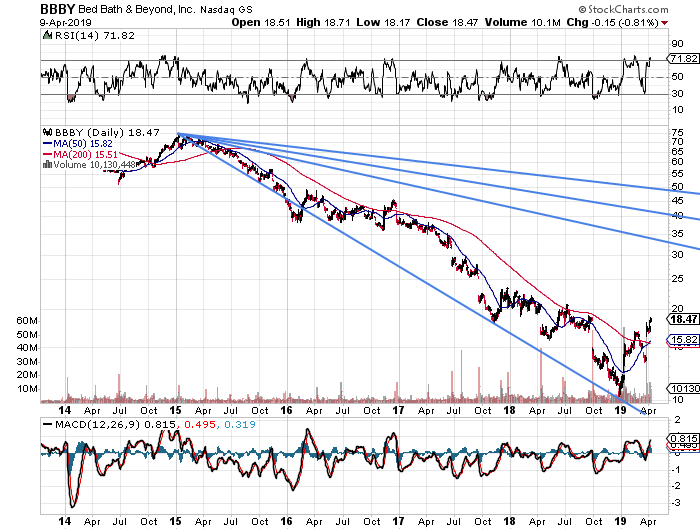 Just a few hours ahead of earnings data, the shares stand technically overbought. Look at the spike in that RSI. Look at the daily MACD. If one can trust the bounce, as well as the Fibonacci Fan model that I placed upon this chart, the shares could run wild given some time, and speculators that are willing to believe. There is that "golden cross" that has just occurred. The algos obviously saw that. There is a way to go about this, if one is game.

Note: The options trades provide an upfront net credit of $0.22.

Best case: The call is actionable by this Friday and the investor already has a covered call in place. Net basis on the equity position would then be $18.78. Max profit would be $6.22 or 33.1% over seven months.

Worst case: The shares come in this week, and the call expires worthless. At that point, the trader either has to buy back the call (itself at a profit but most likely forcing the entire venture on to the minus side), or have the discipline to keep an eye on the shares for seven months so as to not end up being called away at $25 in November, with the shares trading higher, and then having to buy the equity.

Get an email alert each time I write an article for Real Money. Click the "+Follow" next to my byline to this article.
TAGS: Earnings | Investing | Markets | Options | Stocks | Technical Analysis | Trading | Retail | E-Commerce | Market Recon

You Bet There's a Trade to Be Made With BP

Here's how I'll do it without increasing my allocation toward energy.