On Wednesday evening, Amazon (AMZN) stole the headlines. CrowdStrike (CRWD) released the firm's fourth quarter financial performance to less fanfare than the firm might have on a different day. CrowdStrike posted adjusted EPS of $0.30, easily beating consensus view. (GAAP EPS hit the tape at a loss opf $0.18 per share.) Earnings were adjusted primarily for stock-based compensation as well as other items. Revenue generation amounted to $431M, which was also a beat, and good enough for year over year revenue growth of 62.7%. Oddly, this was the second consecutive quarter that CrowdStrike grew sales a rounded-off 63%.

The firm achieved record new ARR (annual recurring revenue) of $217M with growth accelerating for a second straight quarter. Ending ARR grew 65% year over year to exceed $1.7B. Adjusted subscription gross margin dropped to 79% from 80% one year ago, while free cash flow improved from $97.4M for the year ago period to $127.3M.

CrowdStrike CFO Burt Podbere is quoted in the press release as saying, "Our durable platform model and powerful innovation engine have translated into a truly differentiated offering in the market and strong momentum heading into fiscal year 2023. As we continue to capitalize on our unique market position, we firmly believe CrowdStrike's best days are ahead." During the call, Podbere told analysts, "We think there is a tremendous amount of demand. There is tremendous opportunity, and we're going forward, so I Think that when we guide, we took all of that into consideration."

CrowdStrike runs with a net cash position of $1.996B, which is up small from a year ago. Current assets increased over that time frame to $2.57B, largely on growth in accounts receivable. Current liabilities also grew significantly to $1.406B on growth in accrued payrolls as well as accounts payable. That makes CrowdStrike's current ratio a healthy 1.82. Total assets ended the quarter at $3.618B, which was up $886M. That looks nice, but includes a $333M increase for the "goodwill" entry. I don't love that. Total liabilities less equity adds up to $2.58B. The balance sheet does pass the Sarge test, goodwill being the only item I did not like... even with a zero for that line, I would have given this balance sheet a passing grade.

I like CrowdStrike. I have for a long while. I always hold at least two cybersecurity stocks in my main portfolio. Currently, those names are from a quality point of view that I consider best of breed. That would be Palo Alto Networks (PANW) , which has been a solid investment, and Zscaler (ZS) , which has been more difficult to manage. When capital flows more freely into technology and into growth, and I go to a third holding, CrowdStrike has been that third name. That said, growth has been out of favor, and both CrowdStrike and Zscaler trade at three figure forward looking earnings multiples. 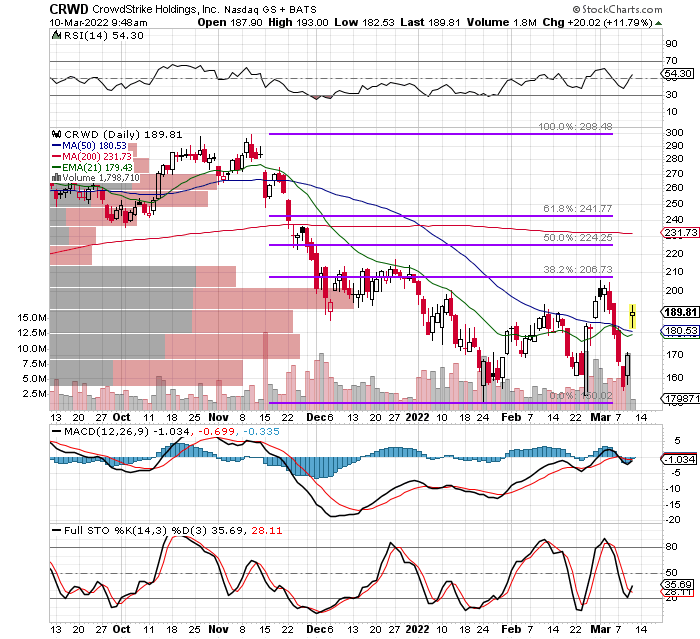 I haven't run out and purchased CRWD on this release and I am not going to tell you to. I am going to say that the shares have taken the 21 day EMA and the 50 day SMA in one gap up move. Now, investors will look to see if CRWD moves to test the 50 day SMA at $180.53 from above. If it does, and passes that test, well, we may just have a point of entry. I will not act until I see if that test materializes.

Other than that, relative strength is neutral, the Full Stochastics Oscillator looks to be rebounding off of nearly oversold conditions, while the daily MACD, though moving in the right direction, remains a mess. I would rather write the $180 puts expiring tomorrow for lunch money than pay $190 this morning. Stay tuned though. This name is in my personal bullpen.