The original meme stock reported their quarterly results last night. The firm lost a lot of money. Those expecting me to trash the name might find something to their liking, as I am not thrilled from top to bottom. Those expecting an honest assessment without an intent to disparage the name nor its investors, might find more.

GameStop (GME) posted GAAP EPS of a loss of $1.39 per share for their third quarter, badly missing estimates that were for a loss of less than sixty cents per share. Revenue did grow nicely though. Sales amounted to $1.3B, which beat expectations by a significant margin, and was good for year over year growth of 30%.

There are several issues that one might take with how management communicates with shareholders and how the firm is trying to transform into something else. I also think that this is one case where increased sales took on a negative look. We all know that GameStop, under Chair Ryan Cohen, has tried to steer the firm toward more of an e-commerce focused business less reliant on brick and mortar retail locations. He has even placed former Amazon (AMZN) execs Matthew Furlong and Mike Recupero in the roles of CEO and CFO, respectively.

I don't know. I mean, I guess offering some kind of guidance, anything at all is asking way too much. That said, maybe the firm could answer some questions for sell-side analysts or the very investors who are the lifeblood of the company? I mean, show your people some respect. Oh, and another thing. Looks like the firm received an SEC subpoena back in August. Might want to disclose that... oh I don't know... in August. GameStop says this subpoena is not expected to adversely impact the business and there is no reason not to believe them, but they have also made little effort to build a trusting relationship between management and shareholders. The firm also says that it is "exploring emerging opportunities" which would include the blockchain, non-fungible tokens, and next generation gaming.

The firm established new offices in Seattle and Boston in order to be closer to where existing hubs of technology based talent are located. GameStop also secured a new $500M ABL (asset-based lending) facility in November with improved liquidity and terms, including reduced borrowing costs and lighter covenants.

This is where those ready to throw some more stones and investors might be pleasantly surprised. The firm closed the quarter with $1.413B in cash and equivalents on the books, as well as $1.14B in inventories, which the firm signals was an intentional pre-holiday build-up in an effort toward supply chain issues. Current assets have nearly doubled over 12 months, while total assets have increased almost 50%. This is really all cash and inventories.

Current liabilities have contracted over 12 months despite an expected increase in accounts payable related to the inventory build. Total liabilities (less equity) have contracted as well as the firm has obviously worked toward reducing long-term debt. This firm may be losing money and is certainly seeing an already negative free cash flow turn even more negative, so there is undeniable cash burn. But I will say this: this balance sheet is clean. The current ratio is not just healthy, it is far healthier than what many well known "value" stocks run with.

I am not saying that this business can be saved, I have no idea if it can. I can say that GameStop will not likely be gone tomorrow nor the day after that.

Is GameStop expensive? Of course, most money losing firms whose stock trade at three digit dollar levels usually are. GME trades at two times trailing 12 months' sales. For Target (TGT) , that metric stands at 1.2 times, and for Walmart (WMT) , it's more like 0.9. So, yes, GME is indeed expensive. I'm not going to invest in these shares unless they take a significant nose-dive at some point in the future, but it's not like there's nothing here, or like there's no hope.

Oh, by the way, a rough 14.5% of the entire float is still held in short positions, so shorting this thing might still be a dangerous idea. That said, if I see that various intraday signals are working, I am not opposed to day-trading GameStop from the long side. 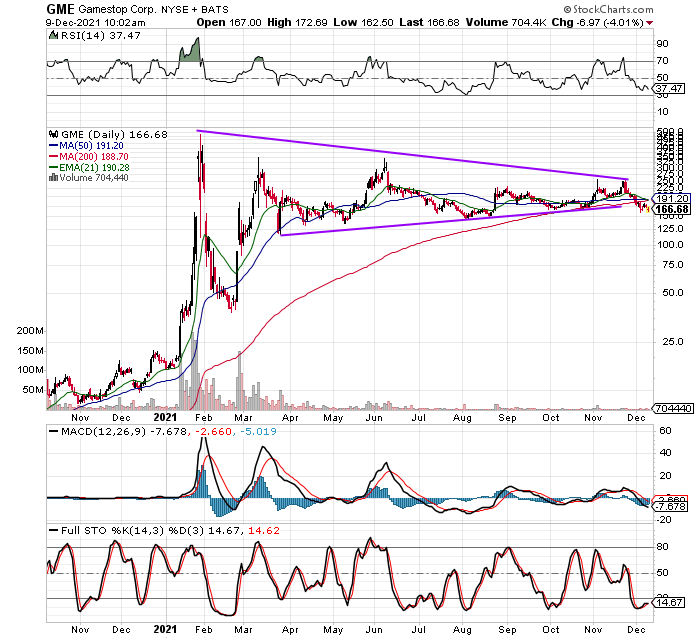 Readers will see a general narrowing of lower highs matched by higher lows that had been in place since GME's ridiculous short-squeeze induced highs of this past January. This pattern has now broken to the downside. At the same time Relative Strength is soft, while the Full Stochastics Oscillator is screaming "oversold." Let's zoom in...

Here is a danger that I have no doubt that the algorithms that control the point of sale in 2021 will latch on and react to. The shares are trading well below all three of the moving averages that I think matter the most. The 21 day EMA (swing trader's mini-death cross) has already crossed below the 50 day SMA. The 21 day EMA will soon cross below the 200 day SMA, and then the 50 day SMA (actual death cross) will cross below the 200 day SMA itself.

If one is inclined to purchase these shares, I would encourage two things. One, at least wait until there is a potential reaction to these negative crossovers. Two... wait until the last sale recaptures the 200 day line. That way, there is a chance that some professional money will follow you into a possibly changing trend.

(AMZN and WMT are holdings in the Action Alerts PLUS member club. Want to be alerted before AAP buys or sells these stocks? Learn more now.)

Get an email alert each time I write an article for Real Money. Click the "+Follow" next to my byline to this article.
TAGS: Earnings | Investing | Stocks | Technical Analysis | Trading | Gaming