One big hole...is all it takes. Or maybe a peppering of small holes. They say that what goes up must come down. Though we often see that this old adage does not always necessarily apply to stock prices, readers will note a glaring example of such activity in a now well-known company taking place on successive days. Think back to the Civil War. The U.S. Army had a great idea back in the days prior to military aviation. Hot air balloons to be used for the purpose of reconnaissance. Perfectly anchored, forward observers no longer had to sneak across disputed territory, or cross enemy lines in order to bring back information on the locations of various units and where they were headed. Nope. Now, this information could be seen from above. There was a problem though. Hot air balloons make for large targets, and are quite susceptible to small arms fire. All it takes is one big hole...

You will recall that early last September the strategic partnership agreed upon between General Motors GM and Nikola Corp (NKLA) , a manufacturer of battery run, as well hydrogen run electric vehicles, as well as drivetrain and components for such vehicles. The deal was believed to possibly leave GM is a position to hold 11% of the company. Both stocks rallied on that news.

Just one thing, okay more than one thing. Two days later, New York-based Hindenburg Research released a report that basically labels Nikola an "intricate fraud", implicating that the firm may have misrepresented its technological capabilities. Within a matter of days, the Securities and Exchange Commission and Department of Justice are both said to be investigating the firm. GM CEO Mary Barra is put in the awkward position of defending that firm's due diligence, and Nikola CEO Trevor Milton (the firm's largest shareholder) resigns.

GM CEO Mary Barra addressed the listening audience at the Barclays conference about a week ago. Barra intends to increase spending on future electric models by 35% to more than $27 billion. Her target is "to put everyone on an electric vehicle." GM now plans to offer 30 electric models globally by 2025, up from an intended 20 models by 2023. Barra did mention battery production as a priority. Barra did not mention anything newsy around the supposed partnership with Nikola. Quiet.

Shares of Nikola were hot, rising 17% on Tuesday after rising 11% on Monday, carried along with many other green energy names. New CEO Mark Russell was to appear on Jim Cramer's "Mad Money" TV show on CNBC and speculation ran high.

Those expecting to hear news regarding forward progress with GM were to be disappointed. Instead of answering Jim Cramer with any kind of authority, Russel implied that discussions with General Motors about supplying fuel cells, battery technologies, and an all-electric pick-up truck were ongoing. Russell instead said that these aspects of that supposed deal "are interesting to us". Hmm. One thing obviously left unconfirmed was that GM might be taking a large equity stake in the firm.

(For more on NKLA, see Nikola's Charts Are Not Looking as Good as its Confident CEO.)

The shares obviously fell in after-hours, but not all the way back to early last week levels. There is more that investors need to be cognizant of. Nikola exists with roughly 360.9 million shares of stock outstanding. The IPO lock-up period expires December 1st, which is this coming Tuesday. Owners of 136.5 million shares have agreed to extend their lock-up period until April 31. That leaves a potential 224.4 million shares whose owners are free to sell their shares as soon as next week. Former CEO Trevor Milton holds approximately 91.6 million of those shares.

What Trevor Milton does next week will tell investors whether or not he believes that there is a deal with GM in place or not. The firms have until December 3, next Thursday, to reach a solid deal. At that point either firm can exit the partnership. Without GM, this is a money losing operation that I, as a trader, don't need on my book. I have exposure to the EV spence through Tesla (TSLA) , and I have exposure to traditional vehicle markets through Ford Motor (F) , basically because when the country called in need of ventilators last spring, they answered without hesitation. That impressed me. 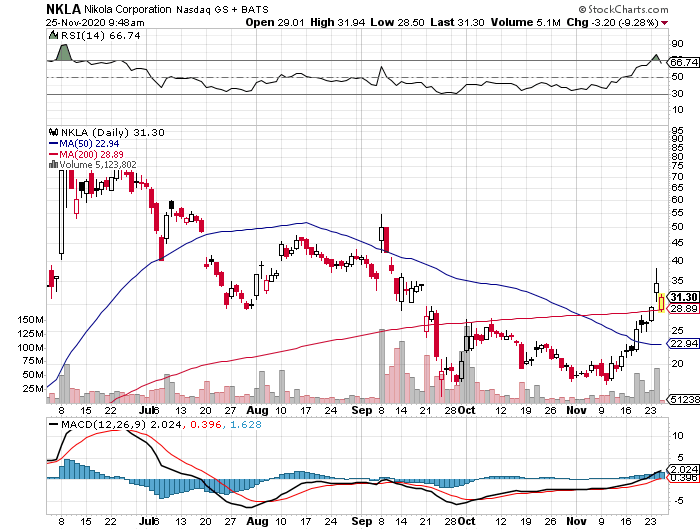 Readers will note that NKLA appears to be successfully defending its own 50 day SMA on Wednesday morning. This could be technically important. Then again, readers will also note that this name "suffered" a "death cross" back in early November and responded by bottoming and heading higher, so technicals don't always work the way they do in the text books.

My opinion is that Nikola will surely be volatile next week, and I have no idea which way that goes. I have no problem with speculators speculating, as long as they understand that they are indeed... doing just that. You go that route on this name, you go without me. I do, however wish you much fortune, and a Happy Thanksgiving.

Get an email alert each time I write an article for Real Money. Click the "+Follow" next to my byline to this article.
TAGS: Investing | Stocks | Technical Analysis | Trading | Automotive | Mad Money | Electric Vehicles