On Thursday, President Biden said that he is set to pardon all prior federal offenses of simple possession of marijuana. The president said, "Sending people to prison for possessing marijuana has upended too many lives and incarcerated people for conduct that many states no longer prohibit."

Biden also said that he will call on federal regulators to review how cannabis is classified. He also called on state governors to take similar action. The DEA (Drug Enforcement Agency) currently lists cannabis alongside heroin and other hard drugs as a "Schedule 1" substance.

For the three month period ended August 31st, Tilray Brands posted adjusted EPS of a loss of $0.08 (GAAP EPS: $-0.13) on revenue of $153.21M. These top and bottom line results both fell short of Wall Street's expectations, while the revenue print showed a year over year contraction of 8.8%. On a constant currency basis, the $153.21M would have been $166.5M. International cannabis revenue printed at just $10.4M, or $11.9M in constant currency.

There were some moderate positives. The firm maintained its number one position in Canada with an 8.5% cannabis market share. The firm also achieved $108M in annualized cash cost-savings since closing on the Aphria transaction. Cannabis gross margin improved sharply to 51% from 43% for the year ago comp.

Net income/loss amounted to $-66M. However, adjusted EBITDA came to $13.5M. This was the second best quarter in the firm's history for this metric, and was Tilray's fourteenth consecutive quarter of positive adjusted EBITDA.

Distribution drove revenue of $60.585M, down 10% from a year ago, and good for 40% of total revenue. This was constant from last year.

Chairman and CEO Irwin D. Simon addressed the public in the press release. He commented... "In aggregate, we expect to remove $130M of costs from the business. We also plan to realize an additional $40M in revenue and interest payments from the HEXO Transaction. These initiatives, combined with our market share and revenue gains should position Tilray Brands extraordinarily well for the future, allowing us to reconfirm our guidance of $70 - $80M of adjusted EBITDA and be free cash flow positive."

Tilray exited the quarter with a net cash position of $490.6M, which is up from May, and inventory of $244.7M. That's in line with where it was three months earlier. This brings current assets up to $910.9M. Current liabilities amount to $273.3M including $82.4M in debt considered current between bank debt and long term debt deemed so. This brings Tilray's current ratio to a quite robust 3.33. Even sans all inventories, the firm's quick ratio is a still strong 2.44.

In all between items actually labeled as debt and other monies owed, the firm could not pay it all off out of pocket, but could knock down enough of it if need be. While the longer-term situation is a little messy - not terribly messy - the firm's current situation is very strong.

I think there is a long way to go. I think the president's words will help with the federal legalization of recreational use cannabis. Marijuana reform legislation is currently under review in the US Senate (Cannabis Administration and Opportunity Act), but I think we are a long way from actually getting there. That said, I can see this as an investment, probably not a trade, but an investment. The firm is probably not that close to sustained profitability, but it has built the balance sheet to tough out these hard times. 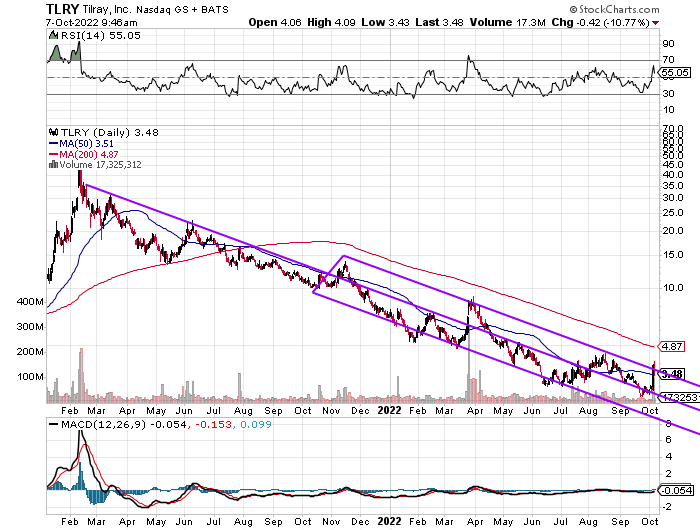 Omitting the spike highs of February 2021, the stock has been remarkably consistent. Consistently awful that is over a 20 month period. The shares are trying to hang on to Thursday's gains, have retaken their own 50 day SMA, and are also trying to break out of this very lengthy Pitchfork model. I think the shares can be bought here in small to medium size for a long-term investment.

Get an email alert each time I write an article for Real Money. Click the "+Follow" next to my byline to this article.
TAGS: Regulation | Investing | Markets | Stocks | Technical Analysis | Trading | Marijuana | Cannabis