This is one of those days where the indexes are in the red, but there are plenty of names seeing strong and continued buying. Trends and momentum are definitely the name of the game in the underlying names around the market. It's a positive to see the potential for a stock picker's market making a return. The challenge here is the extension to which we are seeing some names move while others languish. And if your name/holding starts to fade, it doesn't seem like there is much support to stop it. Granted, that's the rarer case at the moment, but it is there.

Most of the current move appears to be focused on the cloud and biotech. These are the two sectors most protected from a global economic slowdown, at least according to stock prices. They are also the names you'll have to pay up for if you want to be involved. Unfortunately, when these groups finally have a bout of profit-taking, it might get really ugly, really fast. I suspect the cloud names are more susceptible to profit-taking than biotech at the moment. I wish I could tell you when that's going to happen. Many names are up 50% or 100% or more off their recent bottoms. It's not only chasing but also short squeezes. I believe we're seeing some managers and traders taking shot after shot intraday, but when nothing develops lower, then either cover and walk away or flip sides and go long for the trade.

Making matters more difficult is the consistent breakaway gaps we're seeing on so many charts. Not one, but multiple gaps, multiple days in a row. A name like Datadog (DDOG) , which posted strong earnings after the close on Monday, has gapped higher four straight days and it hasn't come back to test the previous close on a single one of those days. How can you even try to predict a top there? You can't, which makes shorting a major crapshoot. For any short holding overnight, the market simply isn't giving a chance to exit without a loss and people hate taking losses.

If you want continued weakness, virtually across the board, then check out the banks. The Financial Select Sector SPDR Fund (XLF) continues to lag, well, everything. If the ETF closes under $21.50, it is at a real risk to fill that gap to the $20 level. That could be ugly for large caps in addition to the financials themselves. The impact on biotech and cloud names would likely be minimal. In fact, the money leaving the banking names may find their way over to the hot spaces deepening the chase. 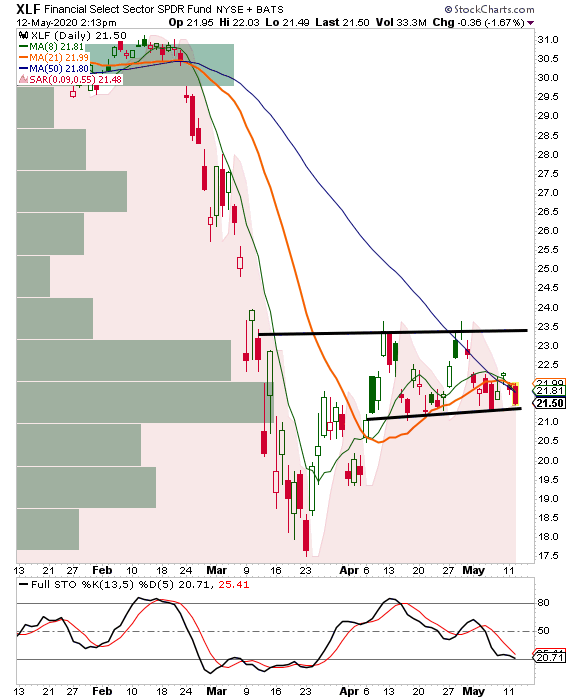 Rather than buy the hot names today, I'll be patient here and see if we get a few days of consolidation or the one big hit when folks won't want to buy and the air comes out of the bulls, even temporarily. Some of the runs I targeted to happen over 4 to 6 weeks or the summer have occurred in days. If you're a bit confused, that's okay. Although reopening is the popular phrase right now, the buying that's happening is coming in names and spaces that may actually do better if we have a slow uptake of the traditional economy and continue more inline with what's been happening over the past six weeks. When that starts to change, then I'll look at the banks for a possible buy.

Get an email alert each time I write an article for Real Money. Click the "+Follow" next to my byline to this article.
TAGS: ETFs | Investing | Markets | Stocks | Technical Analysis | Trading | Banking | Financial Services