Box, Inc (BOX) is set to report the firm's third quarter financial results on Tuesday evening. There are only nine sell-side analysts following this name that I can find. Consensus view across the group is for adjusted EPS of $0.21 on revenue of $218.5B. There is almost no range of expectations among these nine individuals. The range of expectations for EPS spans from $0.20 to $0.22, while for revenue generation just $218B to $218.8B. Should the numbers land precisely upon Wall Street's expectations, they would be good for earnings growth of 5% on sales growth of 11.5%. In addition, among the nine, there has been one downward revision made to earnings expectations and one upward revision made to revenue projections.

BOX provides a cloud content management platform enabling organizations to securely access and share content from anywhere, on any device. Users can collaborate on content both internally and with external parties, automate business processes, develop custom applications, and implement any necessary compliance features. The platform integrates well with enterprise business applications and is compatible with multiple application environments. That said, it was during the reporting period that BOX introduced BOX Notes, which is an updated version of the Box Mobile App that integrates more deeply with Microsoft (MSFT) 360, Slack, which is now part of Salesforce (CRM) , and Zoom Video (ZM) .

What to Watch/Listen for

Investors will be interested in learning if the firm has expanded upon their relationship with the U.S. Air Force Reserve Command, as well as something on the firm's relationship with activist investor Starboard Value. Readers might recall that Starboard Value, which held an 8% stake in the firm three months ago, had launched a push to remove three members of the board including CEO Aaron Levie, and to explore a sale of the company. We know from the results of that proxy battle that Starboard lost that fight.

However, we also know that there had been chatter back in early October that put BOX together with Salesforce. That chatter, at least for now, appears to have gone nowhere.

Do I love that the firm has never posted positive (unadjusted) net income? Of course not. The firm does however produce positive operating and levered free cash flow. The balance sheet is healthy enough. Current assets outweigh current liabilities. Total assets outweigh total liabilities. Cash outweighs total debt. The firm's current ratio stands closer to two than it does one. In short, the books are being competently managed. 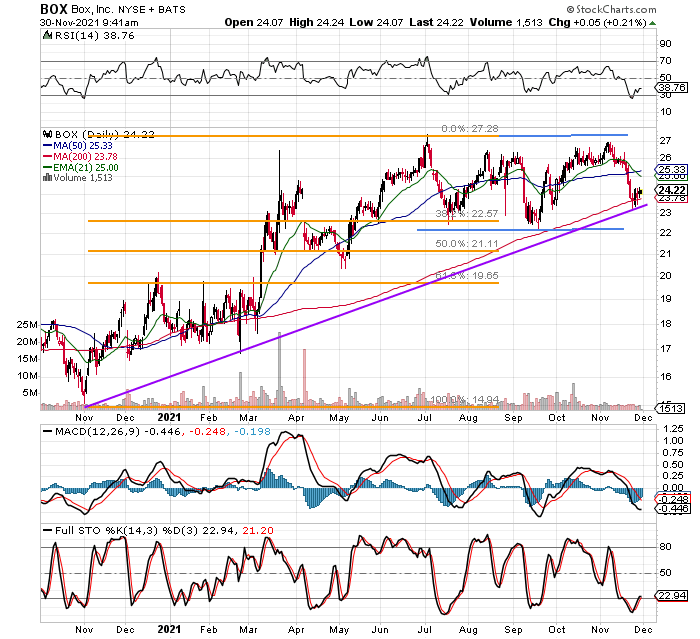 Readers will note that since July, BOX has traded in a basing (basing pattern of consolidation) that roughly coincides with a 38.2% Fibonacci retracement of the November 2020 through June 2021 rally. In addition, one can draw a (purple) trend line all the way from that November 2020 low to the present and see that Box is at a very important spot in terms of potential support. The 200 day SMA's presence only cements this thought.

For this reason, I think it is not illogical to enter into a position from the long side, but one would have to use some finesse in order to reduce the inherent risk.

Notes: The purchase of the put that expires in more than two weeks is expensive, but protects to the downside in the event that this substantial looking support breaks. The sales of both the put and the call are made to partially subsidize the purchase of that protection. The trader may face the risk of having to repurchase 100 shares at $22 after having sold them at $24.

(MSFT and CRM are holdings in the Action Alerts PLUS member club. Want to be alerted before AAP buys or sells these stocks? Learn more now.)