Need an airline? Well, yes my portfolio certainly does. Warren Buffett apparently didn't think so. The truth is that I will be taking no cheap shots at the "Oracle of Omaha". I didn't think so either. The group is undeniably hot, hotter than heck. American Airlines (AAL) led the way last week as that firm, as well as United Air Lines (UAL) , added more flights than Wall Street expected back to their summer schedules, as demand for air travel in an economy still more closed than open has come off of the floor. Does it matter that perhaps demand for international travel could remain quite paltry for a considerable period of time? JP Morgan in a note to clients last week seemed cautious on that front, as am I.

What does matter, and I am sure that Buffett did not see this coming was the $25 billion in federal aid provided to the industry as part of the CARES act. That, and the aggression of hedge fund managers willing to bet on cheap stocks that would benefit should economies recover, and the SARS-Cov-2 coronavirus not forcing a reversal of the policies that shut down nearly all transaction in the first place, not to mention interpersonal human interaction.

Most of you know, some of you may not, that the transports fall under the Industrials in the world of S&P 500 sector divisions. Each of those sectors is divided into any number of industry groups. Year to date, the Industrials, using the Sector Select SPDR ETF (XLI) as a proxy is -5.74% for the year. Good for ninth place out of 11 sectors. Within that sector, there are 16 different industry groupings. The airlines, using the Dow Jones US Airlines Index as a proxy, stands in 16th place (dead last) at -35%.

Funny thing though... forget the year to date performance. Investing is as much about when you trade as anything else. Over one week the airlines are in first place of those same 16 sectors at +36.6%. Want to go back a month? Airlines are still in first place at +62%. Incredible, really.

I watched most of this rally. Any day now, the airlines would selloff and I'll place a few shares on the book, Portfolio diversified. Mission accomplished. Except one thing. They keep coming for these stinking stocks. I had to act. You went small, right Sarge? You guys know me. I always lead with a jab. In fact, I only jab until I get to the point of significant victory. Then comes the haymaker.

After talking the talk for a while, finally, I did walk the walk. Grabbed a few of these on Monday morning well before the opening bell, after Market Recon had been published. I have always felt right or wrong that Southwest Airlines (LUV) was better managed than maybe were some other airlines. I have always made the effort to book with Southwest in the past when routes and fares were similar. Truth is that I will not be the first fellow that you see returning to the skies. I'll watch others fly for a while. Anything under 1,500 miles is now a road trip. Hey, that's better than cruise ships. I will never get on one of those again. There is just no need to place myself or the people I love voluntarily at that level of vulnerability.

Why Southwest, besides personal bias? Good question. For one, and this is a big one... the firm's business is very domestic in nature. Should international travel recover far more slowly than domestic travel... and that does make sense, Southwest is not as exposed as are many of its direct competitors. Business travel will eventually return, but corporations are going to be careful. There will be no large conventions, There may be two folks going to visit an unhappy client. Recreational travel will be another thing entirely. While the first few who think about taking a vacation will drive to the Poconos, a national park, or maybe Niagara Falls, there will be at some point an effort to go to the next level. That's Disney (DIS) theme parks in Florida and California. That's New Orleans. That's Las Vegas. You know they turned the Bellagio fountain show back on last week. That my friends, is Southwest Airlines.

Did I mention that Southwest Airlines priced $1.8 billion in debt last week due in 2023 and 2027 that will be used to repay all outstanding borrowings and a bit more for general purposes? That deal closes today, by the way. 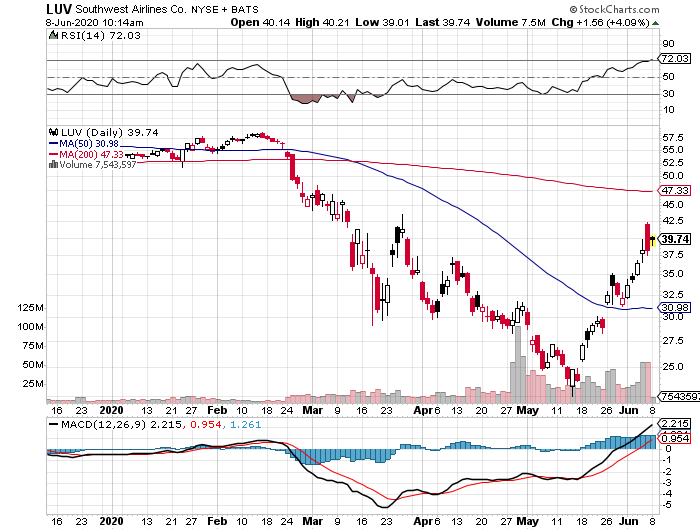 I see what you see, certainly missed the buy signals. At least a few bucks off of the high, I counter. The shares are technically overbought. Go find 10 that aren't. I'll wait. What I would like to do is sell these shares close to the 200 day SMA at $47. I am willing to add down to $35. I admit I am wrong at $31, and figure out some other way to trade my cash. That said, probably should have at least one airline somewhere on the book.

Get an email alert each time I write an article for Real Money. Click the "+Follow" next to my byline to this article.
TAGS: Economy | Investing | Markets | Stocks | Technical Analysis | Trading | Airlines | Warren Buffett | Coronavirus

Powell, How Would You Rate Inflation Now?

As real inflation ticks higher and much faster than actual GDP growth momentum, then it starts to become a real scare, an inflation scare.