Back on October 30th, Honeywell (HON) reported a rather successful third quarter. The stock reacted very well. Less than two weeks later, CEO Darius Adamczyk went public with a new direction for the company, and a new way of getting things done. Adamczyk spoke of making use of "big data" to control and connect everything Honeywell does. He spoke of a new focus on making software "a much more prominent part of who we are." He also spoke on automating warehouses and turning toward renewables. The stock again spiked higher.

Then suddenly the shares became very docile, moving basically sideways now for almost a month and a half. That does not mean that Honeywell has been quiet. Quite the contrary. Between last week and so far this week, Honeywell has been making news, much of it centered around the new strategy. Could another move for these shares be far behind? Let's explore.

Dateline: December 15th. That's last Tuesday for those of you no longer using wall calendars. Honeywell announces the acquisition of Sine Group, an Australian based software as a service company. The acquired technology will be used to support a cloud-based mobile platform that will enhance Honeywell Forge's capabilities in connecting the firm's buildings, while expanding on security, and compliance.

This past Monday, the 21st... winter begins. Not only that, but Honeywell and Signify, a leader in professional lighting and lighting for the IoT (Internet of Things), sign a strategic alliance to deploy smart lighting solutions across the world of commercial real estate. This collaboration will not only connect commercial lighting to software, but also tie in UV-C disinfectant lighting (Think that will be a hit?) with Honeywell's building management systems. One of my sons works in HVAC. They never stop working. Clean air is in demand. Big time.

Yesterday. Honeywell announces an agreement to acquire Sparta Systems from New Mountain Capital for $1.3 billion in an all cash deal. Sparta is a leading provider of enterprise quality management software for the life sciences industry, to include TrackWise Digital that itself integrates a number of variables that improve the quality, compliance, and efficiency of corporate decision making. FYI, TrackWise Digital is built on the Salesforce (CRM) platform.

I am cautiously very excited about this firm going forward. I just love the sheer aggression, and the open willingness to remodel what had been a very successful industrial conglomerate, while remaining on the go, even as a pandemic makes all things uncertain. The firm has suffered a long line of negative numbers for year over year revenue growth. That will not change for the current quarter. Impatient? I don't think you have to be forever. Adamczyk is different. True, he has been there since 2017, but he cut his teeth at General Electric (GE) back when that was a great firm. In addition, Honeywell pays shareholders now $3.72 a year, after just increasing the dividend last month. This may yield only 1.8% at these prices, but if it seems like Honeywell increases the payout every year, they do, or at least have every year since 2011.

Oh, one more thing. You think Honeywell is expensive here. That thought had crossed my mind. The stock trades at 27 times forward looking earnings. The S&P 500 trades at 22 times, and HON itself trades in the high-teens historically. Is the stock overvalued, or is the stock valued differently? Ahh... see what I mean? Big data. High tech. Software as a service. We never used these terms in articles written about Honeywell back in the day. This firm and the way Wall Street looks at it are evolving in real time right before our eyes. 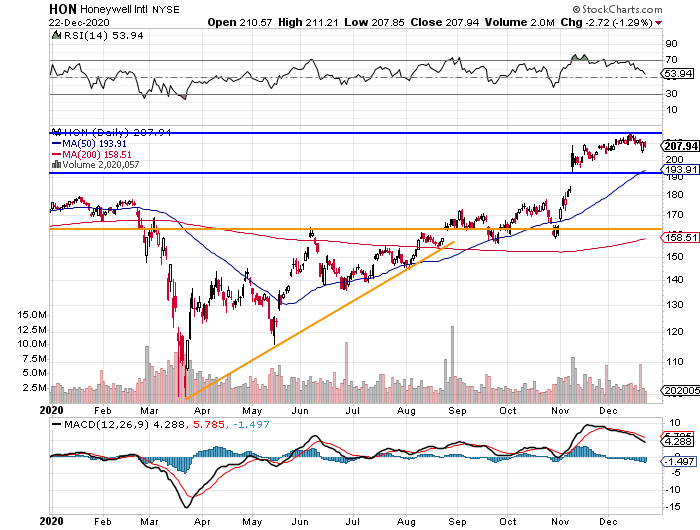 I purposely left the ascending triangle on this chart that I showed you last time I covered the name. This is what at least technically produced the early November breakout. I am long this name, and I am okay with an add right here if one is building an investment. Leave some dry powder though. Technically, as this period of consolidation expands, there is the risk of that gap in between the $186 and $197 levels created upon that breakout will have to fill. That is where I will strike. If that is how it plays, that is where I will "back up the truck" or in plain English... double my long position. Then, my price target will likely be in the low $220's.

Yeah, I like this name. I like Dave Adamczyk. Not as much as Lisa Su -- CEO of (AMD)  and in a class all her own -- but he's on my short list of favorite CEOs.

(HON, CRM, and AMD are holdings in Jim Cramer's Action Alerts PLUS member club. Want to be alerted before Jim Cramer buys or sells these stocks? Learn more now.)

Get an email alert each time I write an article for Real Money. Click the "+Follow" next to my byline to this article.
TAGS: Investing | Markets | Stocks | Technical Analysis | Trading | Industrials