I remember first buying Novavax (NVAX) calls back when I first heard of COVID-19 spreading through the Wuhan area in China. I didn't keep it to myself, I talked about it on Liz Claman's show on the Fox Business Network. I got in with the underlying stock trading in single digits. I doubled my money and got out with the underlying shares still trading in single digits. I was a champ. I went on to invest in the likes of Pfizer (PFE) , Moderna (MRNA) and Johnson & Johnson (JNJ) as I correctly predicted that Pfizer would be first to market with a vaccine. That said, Moderna was by far the best of those investments, and from an investment perspective, Pfizer's partner in creating that first vaccine, BioNTech (BNTX) was a better stock than was Pfizer itself.

About Novavax? Should have bought the equity. That stock cracked the $10 level from below in late February 2020, and peaked above $331 less than one year later. The shares had worked their way back in, bottoming above $117 about a month ago. Now, there's news. Good news. What now?

On Monday morning, Novavax announced that NVX-CoV2373, the firm's recombinant protein-based COVID-19 vaccine candidate demonstrated 100% efficacy against moderate to severe disease, 100% efficacy against variants not considered to be "variants of concern" or "variants of interest", overall efficacy of 90.4%, and efficacy of 91% across high-risk populations in late stage clinical studies of 29,960 participants across the U.S. and Mexico. Studies also show this two-jab vaccine candidate does indicate a neutralizing capacity versus the Alpha variant of the virus, and a modest reduction in neutralizing capacity versus the beta variant.

For those losing track, as variant identification has moved from identification by nation where first discovered to identification through the Greek alphabet... the Alpha variant is the old UK variant, and the Beta variant is the old South African variant. The now considered first Indian or Delta variant that is causing problems well beyond India is too new to have been part of the study. Currently the UK has delayed reopening plans as the Delta variant has become the dominant strain in that nation. It is believed that this variant makes up about 6% of U.S. cases in mid-June 2021.

Back to Novavax. The candidate appears to have been well tolerated by participants, and the trials on 12 to 18 year-olds will continue as Novavax prepares to file for authorization with the FDA in the U.S. at some point in the third quarter. The White House has determined that with just Pfizer, Moderna and JNJ currently authorized for use in the U.S., that the U.S. currently has enough supply to inoculate the entire population, (173 million Americans are at least partially protected.) and is lifting the Defense Production Act restriction forcing U.S. priority for a number of developers that include Novavax.

As Novavax claims to be able to manufacture 100 million doses a month by Q3 and 150 million does per month by Q4, Novavax could become a key player in vaccinating the rest of the world as the U.S. and other developed nations are committed, especially after this weekend's G-7 meetings, to getting this done. The Biden administration is already on the docket to donate 20 million doses of the three vaccines in distribution here as well as 60 million doses of the AstraZeneca (AZN) vaccine in U.S. possession though that shot was never authorized in the U.S., but has been widely used elsewhere. The president is also talking about donating a total of 500 million doses toward the G-7 goal of 1 billion.

Investors can not forget that Novavax has signed a memorandum of understanding with South Korea and SK Biosciences to "explore the expansion of COVID-19 vaccine activities in South Korea." It is thought by some that a potential COVID-19/Influenza combination shot could come from this "memorandum" (which is not quite a contract) at some point down the road. Think of the demand for such a product should COVID vaccination become as seasonal as has the flu shot.

Earnings are not due until early August. Though the firm has been losing money, the balance sheet is in fine shape thanks to Operation Warp Speed. There is no concern over being able to meet obligations. The firm announced in July of 2020 that the Trump administration program had awarded Novavax $1.6 billion in funding to continue with their work on creating a vaccine. The firm was then awarded another $147 million from the program in April 2021, as new President Joe Biden mentioned the firm as a potential contributor to global vaccination. 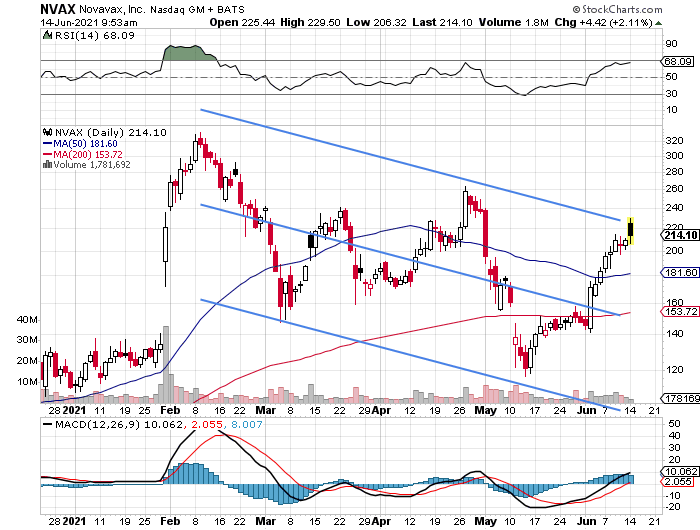 Unfortunately, all of the euphoria that surrounded this name prior to the opening bell on Monday morning appears to have dissipated with that bell. That leaves an existing trend in place that pairs lower highs with subsequent lower lows, and a Relative Strength reading that is very close to being technically overbought.

Fact is that NVAX is probably going to post seriously improved earnings in the not too distant future, and that may leave the stock with nowhere to go but down should a realistic valuation be placed upon the equity. Technically, the shares appear to at this point have more downside risk than upside. That said, ongoing global demand for a COVID vaccine and potential demand for a COVID/Flu combo shot could be game changers. I am not comfortable making bearish bets using equity in such a volatile name, though short interest amounts to less than 8% of the float. Still, I will lay out more than one way to play it.

I see two avenues open to a trader who might be short to medium term bearish on NVAX:

Note: Trader has capped potential loss through mid-July at $1800, but needs the shares to drop to $202 by expiration just to break even.

Personally: I prefer the bear put spread over the covered equity play due to the decreased risk to principal, despite the capped potential for profit. Just an opinion.