International Business Machines Corp. (IBM) is the stock of the day. Tuesday after the close, IBM reported fourth-quarter results that beat EPS and revenue estimates, with revenue down 3.5% year-on-year. Last year, the company broke a nearly six-year streak of declining revenue. Analysts had expected Q4 to continue the trend. Surprise! IBM is up nearly eight percentage points Wednesday morning, so let's check out the charts.

In this daily bar chart of IBM, below, we can see a significant decline from last January to late December. Prices rebounded nicely from late December to now, giving us what may be considered a "right shoulder" of a small inverse head and shoulders pattern from late October.

Prices are above the rising 50-day moving average line. The volume at the late-October low was heavy and it was lighter at the December low, suggesting that selling pressure had "dried up". Indeed, the daily On-Balance-Volume (OBV) line diverges from the price action and makes a higher low in December than in late October.

The trend-following Moving Average Convergence Divergence (MACD) makes a similar bullish divergence, with a higher low in December than in early November. The MACD oscillator just crossed the zero line for an outright go-long signal.

In this weekly bar chart of IBM, below, we can see the big picture of Big Blue from the top -- on Warren Buffett selling around $180 -- to the recent low below $110. Prices have tracked the declining 40-week moving average line lower since early 2017. The weekly OBV line shows a long decline, but also some improvement in the past three months. The weekly MACD oscillator just crossed to the upside for a cover-shorts buy signal.

In this Point and Figure chart of IBM, below, we show no volume and no price gaps. There is an upside price target of $158 being projected. 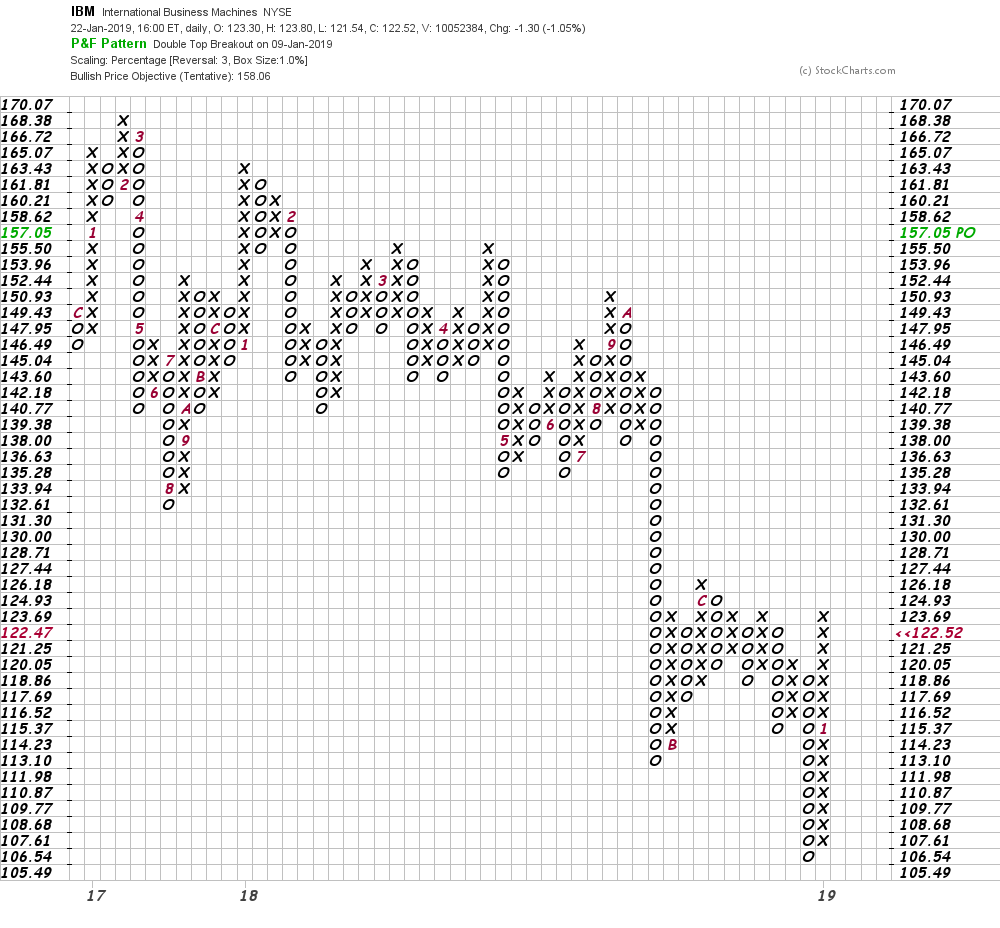 Bottom line strategy: IBM is likely to gap higher Wednesday morning. Prices may or may not pull back to fill the gap, so traders looking to get involved from the long side should do a little buying today. If there is a partial filling of the gap, that weakness could be used to fill out the balance of your buying. Risk a close below $119 looking for gains into the $150s.

Get an email alert each time I write an article for Real Money. Click the "+Follow" next to my byline to this article.
TAGS: Investing | Technical Analysis | Trading | Software & Services | Technology | Technology Hardware & Equipment | Business Communications | Stock of the Day