International Business Machines (IBM) was mentioned by Jim Cramer in his Mad Money program Tuesday night. "They (value investors) want bold acquisitions to spur more growth. That's exactly what IBM did with its $34 billion purchase of Red Hat", Cramer said, and after initially being panned, the deal is already beginning to show promise.

We last looked at IBM last month when it reported its earnings, and wrote, "IBM is likely to gap higher Wednesday morning. Prices may or may not pull back to fill the gap, so traders looking to get involved from the long side should do a little buying today. If there is a partial filling of the gap, that weakness could be used to fill out the balance of your buying. Risk a close below $119 looking for gains into the $150's."

Let's see how this is playing out on the charts.

In this daily bar chart of IBM, below, we can see that IBM did not pullback after its gap to the upside last month. Prices have been firm and are now poised to test the declining 200-day moving average line. The slope of the shorter 50-day moving average has been positive since early January.

The daily On-Balance-Volume (OBV) line has been stronger since late October and tells us that buyers of IBM have been more aggressive with heavier volume being traded on days when IBM has closed higher.

The Moving Average Convergence Divergence (MACD) oscillator is above the zero line in positive territory but the two moving averages that make up this indicator have begun to narrow.

In this weekly bar chart of IBM, below, we can see some positives. Prices are testing the underside of the declining 40-week moving average line. There is chart resistance above the market but it does not really "kick in" until above $145 so there is room to rally further.

The weekly OBV line shows a good rise in recent weeks and the MACD oscillator has crossed to a cover shorts signal.

In this Point and Figure chart of IBM, below, we can now see an ambitious upside price target of $192.82 being projected. 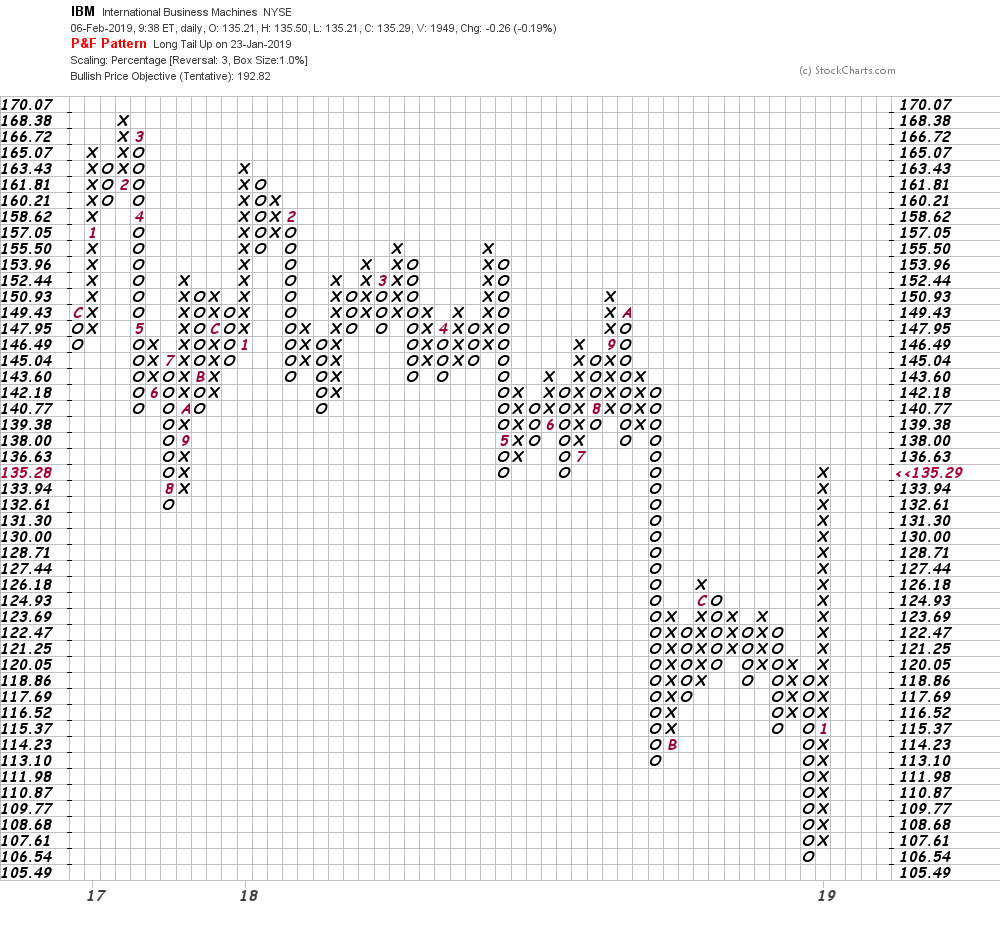 Bottom line strategy: IBM should continue to grind higher. Raise sell stop protection to a close below $130. The $145-$150 area is our next price target with the Point and Figure chart suggesting $192 longer-term.

Get an email alert each time I write an article for Real Money. Click the "+Follow" next to my byline to this article.
TAGS: Investing | Markets | Options | Stocks | Technical Analysis | Trading | Software & Services | Technology | Technology Hardware & Equipment

I Took a Close Look at the Market in the 1990s. This Is What I Found

An interesting trend stuck out when I looked at 1994 until the peak in 1999, and I think it's useful for looking at today.