Rometty said IBM's $34 billion acquisition of Red Hat gives IBM the leading platform for hybrid cloud deployments. The deal allows Red Hat to grow in the 175 countries IBM operates in and it expands the market opportunities for IBM and its many services businesses.

When asked about their vastly different corporate cultures, Whitehurst explained that there are no plans to "merge" the two cultures, but rather to work in concert going forward. Each team will continue to do what they do best.

Finally, when asked about growing competition in the cloud space, Rometty noted that Red Hat's platform works across all clouds and ultimately, that's what IBM's clients are looking for, one solution that can be deployed to a number of different locations. That's the fundamentals in a nutshell so let's check out the charts and indicators.

In this daily bar chart of IBM, below, we see a mixed picture. There is a sharp decline from October to late December and then a rebound which includes an upside price gap. From late January to now prices are basically moving sideways. The question is whether this sideways action is bullish or a little bearish.

IBM is trading above the slightly rising 50-day moving average line and above the still declining 200-day line. Volume looks like it has been declining in recent months and the daily On-Balance-Volume (OBV) line has been in a sideways trend the past three months suggesting a balance between bulls and bears.

In this weekly bar chart of IBM, below, we can see the price action going back three years. Prices have been in a downtrend from early 2017. Prices are above the 40-week moving average line but its slope is negative which tells us that the longer-term trend is bearish.

The volume bars show a decline from late 2018 and the weekly OBV line is barely bullish in my opinion.

The trend-following Moving Average Convergence Divergence (MACD) is just above the zero line with the two moving averages that make up the indicator on top of each other - not a picture of strength.

In this Point and Figure chart of IBM, below, the software is projecting an upside price target of around $168. A trade at $145.04 is needed to refresh the uptrend. A decline to $126.18 would turn the chart bearish. 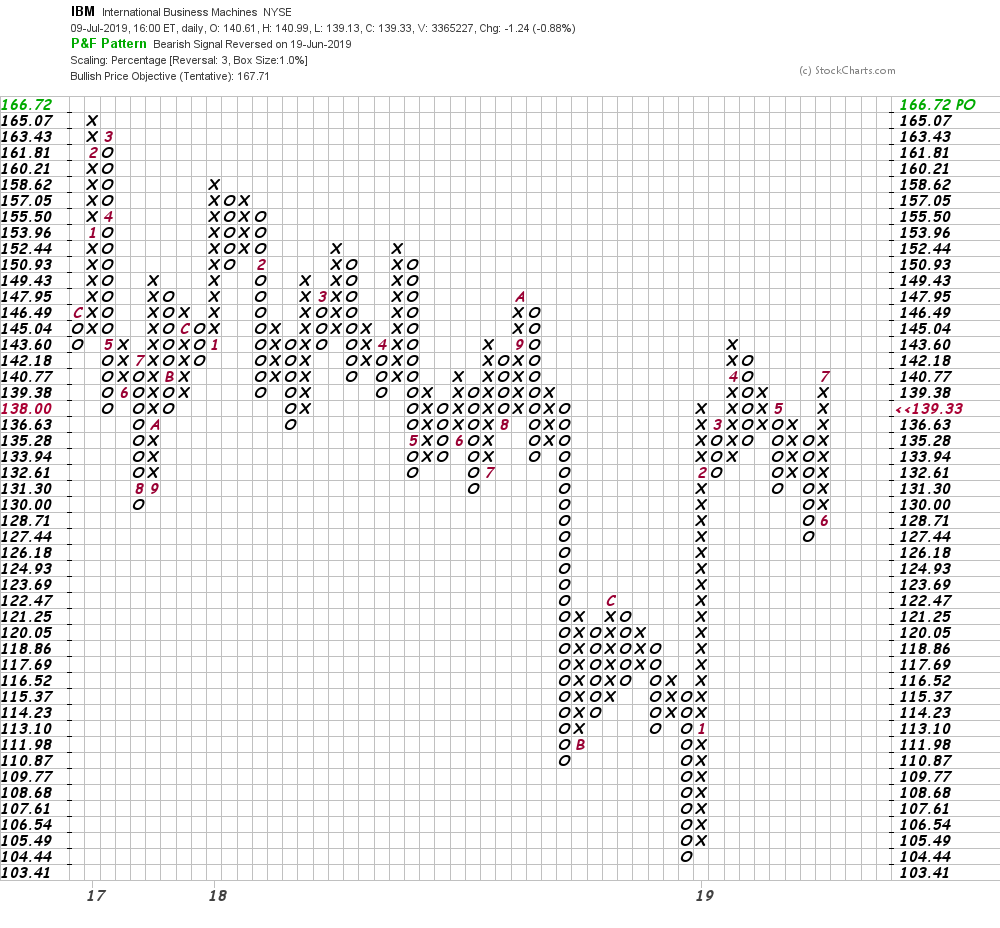 Bottom line strategy: IBM is likely to take one of two paths - a rally and breakout over $145 or more sideways price action. If trading volume increases and the OBV line leads on the upside I would favor an upside move. If volume remains slack then IBM will be stuck in the summer doldrums.

Get an email alert each time I write an article for Real Money. Click the "+Follow" next to my byline to this article.
TAGS: Investing | Stocks | Technical Analysis | Trading | Software & Services | Technology | Technology Hardware & Equipment | Mad Money | Executive Interview