Change is good, they say. That would be seen as good news at IBM. International Business Machines (IBM) reported the firm's second quarter financial results on Monday evening. The firm posted adjusted EPS of $2.33 -- this excludes one-time items that include costs associated with the coming spin-off of "Kyndryl", IBM's managed infrastructure services business -- on revenue of $18.7 billion.

The revenue number was good for year over year growth of 3.2%, which stands out as the fastest acceleration in revenue generation for this firm in three years, and the second consecutive quarter of year over year growth. Note: Obviously Q2 2020 was a tough quarter that provided a low baseline for the firm. The $18.7 billion reported is still down 5% from Q2 2019. Color me not that impressed.

It does, however, need to be pointed out that EPS did beat, and though adjusted, provided earnings growth of 7% making this the first quarter of simultaneous growth for both earnings and revenue for this firm in years.

On the EPS adjustment, the GAAP number printed at just $1.47, which did badly miss expectations. The impact of $1.58 was attributed to charges related to amortization of purchased intangible assets and other acquisition related and retirement related charges, as well as transaction costs related to the separation of the Kyndryl unit. Kyndryl accounted for $0.20 of the $1.58 adjusted.

Total cloud revenue of $7 billion amounted to growth of 13%, or 9% adjusting for divested businesses and currency. This performance was led by the Global Business Services cloud, up 35% and the Cloud & Cognitive Software cloud, up 29%. Red hat revenue, normalized for historical comparability, increased 17%.

Over six months, the firm's cash balance has cut nearly in half to $7.35 billion, in part after spending $1.75 billion on making acquisitions in the second quarter. That left total current and total assets at a rough $9 billion lower than it had been at year's end. The firm did increase the entry for Goodwill by slightly more than $2 billion, which does not thrill those who can find their way around a balance sheet. Current liabilities are lower as well, but still about $6 billion greater than current assets. That said, total assets still easily outpace total liabilities (outside of equity) as the firm reduced long-term debt by almost $6 billion. Overall the balance sheet is okay.

The firm's expectation is for full year 2021 revenue to grow based on current exchange rates. Grow how much? Hey this is IBM, we'll settle for "grow." The company does expect to produce free cash flow of $11 billion to $12 billion, while also expecting $3 billion in impacts to adjusted free cash flow from structural actions to be taken in the fourth quarter and final transaction costs ahead of the Kyndryl spin-off.

The firm has come a long way, but has a long way to go. CEO Arvind Krishna did not exactly inherit a corporation hitting on all, or even very many cylinders. The focus on the cloud is the correct way to go. The separation of some legacy businesses is a smart move. This will reset valuation. The firm, as is... trades at just 12 times forward looking earnings. 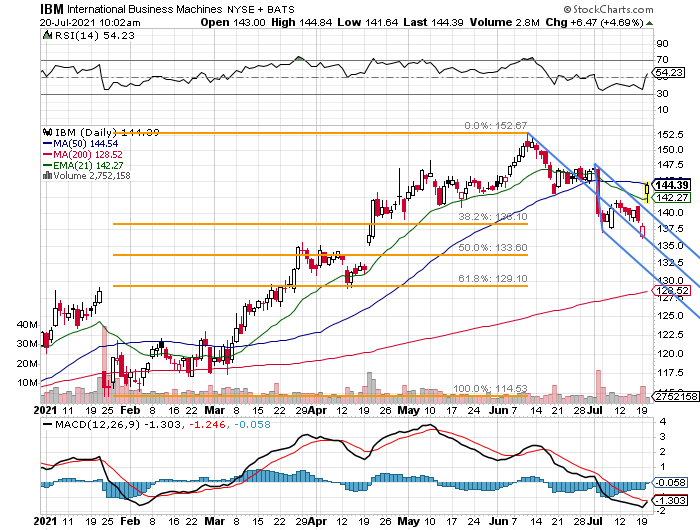 The shares are already 5% higher on Tuesday, after leaving a large overnight gap that in all likelihood must be filled and before long at that. Readers will see that the shares found pretty much standard Fibonacci support at a 38.2% retracement of the New Year's run into June. What this morning's action does is disrupt a downward sloping Pitchfork that had appeared to be taking shape. That's a positive.

Now, taking the 21 day EMA at $142 was key for the morning, bringing the swing trades online. The 50 day SMA at $144.54 is key. What portfolio managers do here, add on a breakout, or take profits at the line is short-term paramount.

... I would rather sell IBM October 15th $135 puts for $3, than to buy the equity on this pop. An interested investor could grab a few IBM $144 calls expiring this Friday for about $1.80, and fund the trade through the sale of the already mentioned puts, thus reducing net basis.

Get an email alert each time I write an article for Real Money. Click the "+Follow" next to my byline to this article.
TAGS: Earnings | Investing | Stocks | Technical Analysis | Trading | Software & Services