Do you Roku (ROKU) ? To be honest, I use Amazon (AMZN) Fire Stick as my streaming service aggregator (cable box?), and I have not been unhappy. That said, there is no arguing with the success that we see over at Roku. The firm reported GAAP EPS of $0.54 (a surprise profit), beating expectations by about 67 cents, and comparable to EPS of $-0.45 for the one year ago period. ROKU also generated $574.18 million in revenue for the reporting period, also topping estimates and good for year over year growth of 78.9%.

Across key operating metrics, all look to be pretty strong, but there was some mild disappointment. While streaming hours increased 49% year over year to 18.3 billion, and ARPU (Average Revenue Per User) increased 32% to $32.14, Active Accounts managed somehow to underperform expectations, despite printing at 53.6 million, which was good for annual growth of 35%. This is actually a deceleration in growth from the 39% pace experienced for Q4 2020.

Roku reports two business segments, one much larger than the other. "Platform" revenue of $466.5 million was not only good for growth of 101%. This segment contributes 81.2% of all sales to the firm's whole, and at least did so this quarter while growing its gross margin to 66.9%. "Player" revenue amounted to $10.7.7 million, growing at a 22% annual clip, and doing so at a gross margin of 13.8%. The firm's total gross margin for the quarter landed at 56.9%, ultimately leading to total gross profit of $326.8 million.

Total operating expenses to include R&D, sales & marketing, and administrative costs came to $251 million, leaving the firm with a profit from operations of $75.8 million. The firm credits better than expected growth in advertising revenues for the strong margin performance, and strong overall quarter. From the shareholder letter... "The Roku Channel continues to perform well, as it provides easy access to content with broad appeal, which attracts viewers, which attracts advertising spend, which in turn enables reinvestment in more content." Not from the shareholder letter... three "whiches", now maybe we can do Macbeth. I'm sorry. Couldn't help myself. Please don't email me to tell me that those "witches" are spelled differently.

Cash and cash equivalents nearly doubled as the firm did raise a rough $1 billion through an "at the market" stock offering. This left both current liabilities and long-term debt largely unchanged relative to the increase on the asset side of the ledger. Of course, stockholder equity exploded, thus keeping liabilities level with assets. The balance sheet is really not in poor shape at all.

That said, the shares trade at 21 times sales (not earnings) and 30 times book. Now that profitability seems to be becoming a habit at ROKU, there lies the possibility that the shares at some point will be valued more like a normal stock and less like a growth stock with some kind of non-quantifiable but glorious potential. The growth in revenue is there, at 73%, 58%,and 70% y/y for the past three quarters. They have already guided for 72% growth for the current quarter. My thinking is that if there is going to be a valuation shock to this name, it is not imminent, with the shares even on this morning's 15% pop, still trading 33% below their mid-February high. 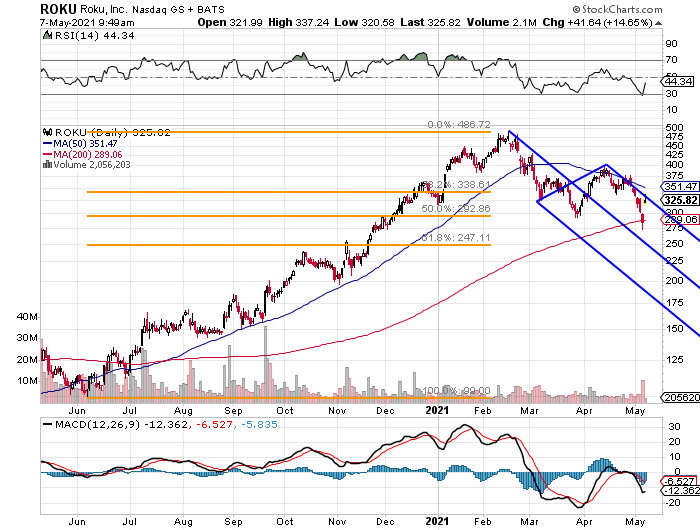 As readers will see, this morning's move puts ROKU in the position of testing the upper trend line of a downward sloping Pitchfork that has been in place for almost three months. It's kind of tough for me to get behind the idea of investing fully in ROKU, unless it breaks out in Pitchfork. In addition, it's not like Amazon Fire Stick or Apple (AAPL) TV are going away, and both also do a nice job, so there is competition here from deep-pocketed mega-cap firms.

I would rather trade a small lot using the 50 day SMA and 200 day SMA for support and resistance as those two lines converge for the short-term than I would want to make ROKU a core position. That's my two cents.

(Amazon and Apple are holdings in Jim Cramer's Action Alerts PLUS member club. Want to be alerted before Jim Cramer buys or sells AMZN or AAPL? Learn more now.)

Get an email alert each time I write an article for Real Money. Click the "+Follow" next to my byline to this article.
TAGS: Earnings | Investing | Stocks | Technical Analysis | Trading | Movies | Television Production/Distribution