You probably did not even notice. I did, but I am long the name, so of course I did. By the way, that's a heads up. I don't like to talk up my book, unless I tell you first that I am talking up my book. I speak of Pfizer (PFE) . On Tuesday, Pfizer announced that the firm would be removing all advertising from Facebook (FB) social media platforms for the month of July. The Facebook boycott, or the more general move to abstain from advertising across social media in response to "hate speech", is a big story. The smaller story of Pfizer joining 240 or so other advertisers? Not so much, at least not when Facebook still has an 8 million member base of advertisers. Today's news? Oh, I know you saw that.

As most readers well know, I have been all over the vaccine story, not just in what I write, but in where I choose to invest. There are roughly 14 vaccines intended for the fight against Covid-19 now in human trials. From the beginning, I have felt that Moderna (MRNA) , and Pfizer had the best potential to be first to market as both were focusing on newer and unproven technology known as Messenger RNA. While unproven, this technology can be produced and tested more quickly, and if effective, mass produced earlier than could more traditional vaccines that require a sample of the virus itself.

On Wednesday, Pfizer released some early clinical results from one of four vaccines that the firm is working on with German biotech BioNTech (BNTX) . Apparently, this early trial included just 45 patients. Twelve were dosed at 10 micrograms, 12 at 30 micrograms, 12 at 100 micrograms , and nine with a placebo. The plan was to follow up with a booster shot three weeks after the initial dosage. Half of those dosed at 100 micrograms ran a fever, and were not re-dosed. Of those receiving lower dosages, 50% reported some adverse side effects after receiving the second dose. These include fever, and sleep disturbances. None were considered to be serious. Simply put, nobody ended up in the hospital, disabled, or in a life threatening situation.

The promising part of the news is this: This vaccine candidate did generate antibodies against SARS-CoV-2, and at least some of those antibodies appear to be neutralizing. Neutralizing antibodies created by this vaccine ran at 1.8 times to 2.8 times the level seen in recovered Covid patients. To be cautionary, we really do not know just how much immunity these or any antibodies provide against the virus. Pfizer will now take this study to the U.S. and test the most promising of its four candidates on as many as 30K people. The need is to show efficacy of at least a 50% reduction in the likelihood of infection without a vaccine. These tests start this summer.

If all goes well, and that is a big if.... Pfizer and BioNTech plan to manufacture up to 100 million dosses by year's end, and a minimum of another 1.2 billion doses by the end of 2021.

I have been in and out of a few names that are involved in this epic battle, but have maintained long positions in several names involved in either the development of vaccines or therapeutics meant to treat Covid, or facilitate testing, and/or health care services. Aside from both Moderna and Pfizer, I speak of Johnson & Johnson (JNJ) , Regneron (REGN) , Merck (MRK) , Vaxart (VXRT) , Abbott Labs (ABT) , Teledoc (TDOC) , CVS Health (CVS) , and Veeva Systems (VEEV) . I have always thought though... that the fact that Pfizer was focusing on this newer technology, can bring a size and scale to the game that not everyone else can, all while yielding 4.65% and was a pretty good stock at these prices.

Like the name? Like the dividend? Me too. I would not buy the shares on this pop though. I would wait until the next down day, and there will be one. 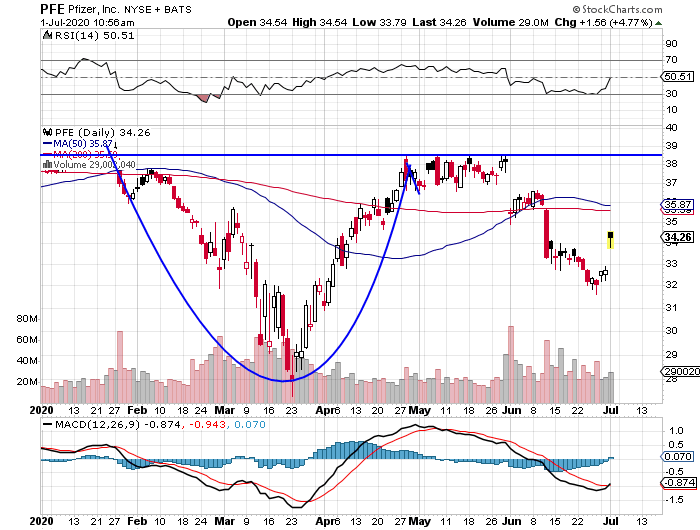 Readers will note that there will most likely be some technical resistance built up in between $35.50 and $36 after the shares failed at pivot for virtually all of May. I think any long position in this name should be accompanied by a covered call. In fact, the July 17th $35's for 60 cents look pretty good from here. I think I'll probably write some of those later today, once this piece hits publication.

Get an email alert each time I write an article for Real Money. Click the "+Follow" next to my byline to this article.
TAGS: Investing | Markets | Stocks | Technical Analysis | Trading | Healthcare | Pharmaceuticals | Coronavirus