You knew that Salesforce (CRM) CEO Marc Benioff had to do something. The firm's cost structure was extended. Businesses have slowed spending on transitioning to and evolving or improving within "the cloud." These companies are who Salesforce targets as clients.

The environment proved tougher than it had been in a long while. Earnings growth had contracted in four of the past five quarters. Revenue growth had slowed noticeably for four quarters consecutively.

The signs, if one chooses to interpret them in such a way, were there to see. Co-CEO Brett Taylor and Stewart Butterfield, co-founder of Salesforce subsidiary Slack, chose not to stick around.

Highly rated Robert W. Baird analyst Rob Oliver had downgraded CRM almost a month ago to a "hold" with a $150 target price. Oliver at the time had noted that these executive departures could add to what is known as "execution risk."

On Wednesday morning, Salesforce announced that the firm was engaging in a restructuring plan that would include laying off about 10% of the firm's workforce as well as the closure of some offices. At last count, the firm had more than 73K employees, so if that number is good, we are talking about something in the ballpark of 7,300 individuals. Affected employees in the US will receive severance of a minimum of five months pay, health insurance and other benefits. These employees will be notified through email this morning.

The company expects this restructuring to lead to roughly $1.4B to $2.1B in charges, of which $800M to $1B will be recorded in the firm's fiscal fourth (current) quarter. The quarter ends in late January. Salesforce is expected to report in late February.

In a note to employees, CEO Marc Benioff wrote, "The environment remains challenging and our customers are taking a more measured approach to their purchasing decisions. As our revenue accelerated through the pandemic, we hired too many people leading into this economic downturn we're now facing, and I take responsibility for that."

Do you think this is a one-off for Salesforce, or are subsequent rounds of layoffs going to be necessary. The late February post-earnings conference call really can't come soon enough.

This would compare to adjusted EPS of $0.84 a year ago on $7.33B in revenue. That would be sales growth of 9%, which would extend the declaration of growth that Benioff is talking about to a fifth straight quarter.

These are better than you think. For two quarters in a row, Salesforce has produced significantly less operating cash flow than it had prior. That said, the firm has continued to produce positive free cash flow. Maybe just by a smidge, but positive nonetheless. We're talking about $0.12 to $0.13 per share of late versus quarters where free cash flow was reported per share in full dollar increments.

The balance sheet remains in decent enough shape as well. As of October, the firm had a net cash position of $11.918B and current assets of $19.209B. This measured up against current liabilities of $18.227B for a current ratio of 1.05. While that ratio is passable, it is indeed healthier than it looks. Of those current liabilities, $11.193B is in unearned revenue, which is not truly a financial liability but more a liability of labor due.

Total assets of $91.884B overwhelms total liabilities (less equity) of $32.553B, but that's a little misleading as Salesforce has recorded "goodwill" and other intangibles of $56.153B (61% of total assets). This in my opinion is a little ridiculous. More importantly, long-term debt amounted to $9.418B (of which $1.182B was labeled as current), which the firm could have paid off out of pocket.

Though it has been some time since I have been long this name, I had been long Salesforce for a long time. For me at one time, this was my favorite "cloud king" and I trusted Marc Benioff as someone that I would not bet against. I still would not bet against Benioff, but is it time to bet on Marc? Does this restructuring signal that the time to reinitiate CRM is upon us? I am not yet convinced. 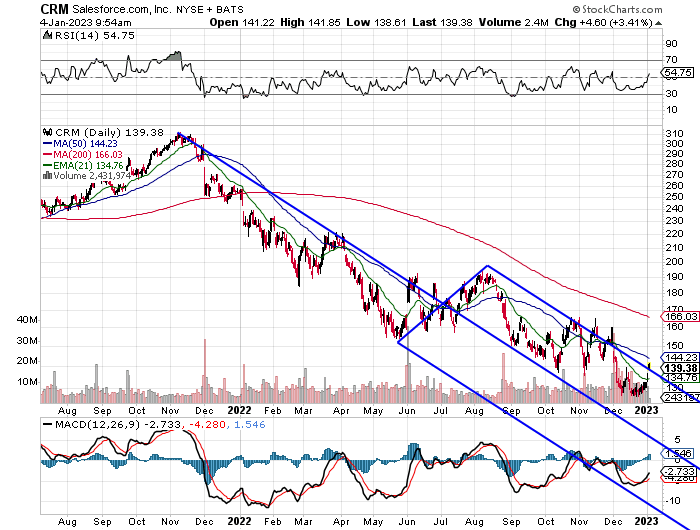 CRM remains in a 14 month downtrend. Readers can see that the stock has pierced the upper trendline of our Pitchfork model on several occasions and was doing so this morning. I am going to have to see this time stick before jumping in. The daily MACD has turned for the better. The stock has retaken its 21 day EMA and that is something. I see the 50 day SMA as the line where perhaps some portfolio managers would increase exposure ahead of earnings.

The problem with that is that three times from October into November, CRM took back both its 21 day EMA and 50 day SMA only to quickly surrender those lines. I think I need to see a take and hold of that 50 day line (currently $144) before I can believe enough to purchase equity and set my sights on the 200 day line. My decision is "not yet."

Get an email alert each time I write an article for Real Money. Click the "+Follow" next to my byline to this article.
TAGS: Economy | Investing | Jobs | Markets | Stocks | Technical Analysis | Trading | Software & Services | Technology