For a moment this morning I thought of my maternal grandfather, a great man, who we lost a long time ago. I thought of spending time in that apartment when I was a child. My grandfather had a big box of dominoes that he used to let us kids play with. We didn't use these dominoes as intended. We would line them up, and then knock them down so we could watch them all fall in succession. Then do it again and again. Until either grandpa or grandma would step on one. Ahh, good times.

The catalyst for this brief remembrance would obviously be the fiscal third quarter earnings report released by Domino's Pizza (DPZ) . There were some bright spots. Largely however, there was miss after miss, and it goes well beyond the top and bottom line. First, I will state that I like the pizza, and even when I have no financial stake in the stock's performance, this is one of those names that I often find myself rooting for. Domino's reported EPS of $2.05 on revenue of $820.8 million. That reads out at a miss on three cents on 4.4% year over year revenue growth, also falling short of consensus.

There is no doubt that revenue growth has slowed terrifically in recent quarters from fiscal 2018, when the firm posted 20% plus growth for all four quarters. Same store sales really took it on the chin. Broken down across three segments, U.S. company owned stores, U.S. franchised stores, and International, all three groups missed what had been expected with both company owned stores and International stores missing very badly. Those U.S. company owned stores experienced an outright decline in year over year revenue generation. On the bright side, margin did improve, both at the gross and operating levels.

The firm has announced a new 2-3 year forward outlook. This will replace the 3-5 year outlook that the firm had offered in the past. This current outlook reigns in corporate expectations over the next 2-3 years for Global Retail Sales, for U.S. same store sales, and for International same store sales from the pace expected that firm had guided to most recently in their last 3-5 year outlook.

Store count continues to grow, which may be a problem. I'll get to that in a moment. Globally, the firm opened 214 new stores during the third quarter, bring the total up to 16,528 (+1,174 y/y). Over the next 2-3 years, Domino's expects this count to expand between 6% to 8%, which was the one key item left unchanged from prior guidance (over 3-5 years).

On Monday, I wrote to you my thoughts on Uber Technologies (UBER) . While I am not a fan of UBER, services such as UBER-eats may be part of the core of the problem here. There was a time not too long ago that a family on the go had far fewer choices in ordering in delivered food for the sake of convenience or the saving of time and effort. Unless one has not really paid attention, largely through the use of third party delivery services, just about all of America's favorite fast food chains, such as McDonald's (MCD) or Wendy's (WEN) now offer such delivery. The field is now crowded.

Secondly, ever hear of "fortressing"? The term is often mentioned in discussing a strong balance sheet, or portfolio allocation (in fact, I used the term in this morning's Market Recon). Fortressing is also Domino's strategy for their improving their relationship with the consumer. The idea is one of opening more stores closer together in order to decrease delivery times, as well as the freshness of the product. In terms of customer satisfaction, the strategy is a likely winner. In terms of same store sales, another term comes to mind... "cannibalization risk." 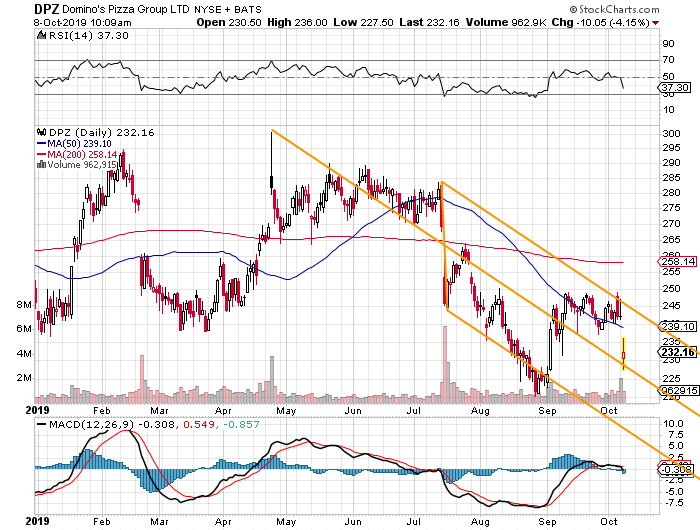 Since these shares topped out in late April, there has been nothing but a constant drumbeat of lower highs coupled with lower lows for much of that time, albeit in a volatile environment. This morning the shares seem to be feeling around for support at the central trend-line of our Pitchfork model, as I am sure that at least some portfolio managers have been forced to reduce exposure as the shares opened below their own 50 day SMA.

So, buy this dip? Even if I wanted to, I would wait. Why? For one, there are a good number of highly rated analysts carrying "buy" ratings on this stock with lofty price targets. Alton Stump of Longbow Research (4 stars) just reiterated his $320 price target yesterday (Monday). I think an interested buyer would be wise to wait and see what the analyst community does in reaction to the guidance.

Secondly, the firm's CEO, Richard Allison, makes an appearance this evening on Jim Cramer's "Mad Money" show at CNBC. Of interest, why not hear the man out?

Get an email alert each time I write an article for Real Money. Click the "+Follow" next to my byline to this article.
TAGS: Earnings | Investing | Stocks | Technical Analysis | Trading | Food & Drink | Stock of the Day

How Does Levi's Size Up Ahead of Earnings?

Cytokinetics Is Showing Its Muscles on the Charts

In light of the stock market's weakness, CYTK has shown impressive strength.

The Market Awaits the Next Macroeconomic Catalyst

Unemployment reports are on deck, and then the next Fed rate hike.