Berkshire Hathaway (BRK.A) (BRK.B) reported the firm's first quarter financial performance on Saturday morning, and then that afternoon... proceeded to hold the firm's annual shareholder meeting virtually from Los Angeles. CEO Warren Buffett (90), of course was the main attraction, surrounded by his three vice chairmen, long-time pal Charlie Munger (97), and the younger Greg Abel and Ajit Jain. Munger may have dropped a hint at who will succeed Buffett as Chair when saying at one point that "Greg will keep the culture." Greg Abel runs the railroad (BNSF) and energy businesses, while Jain runs the insurance businesses.

The firm's cash balance to include equivalents and short-term investments grew from $138.3 billion to $145.4 billion over the three month period. By segment, the Railroad, Utilities and Energy unit posted operating earnings of $1.95 billion, up from $1.75 billion. Insurance (Investment Income) tailed off to $1.21 billion from $1.39 billion, Insurance Underwriting improved from $363 million to $764 million, while businesses labeled "Other" showed aggregate improvement to $2.62 billion from $2.04 billion.

Like many accomplished business folks of his generation, Buffett is not afraid to speak his mind. Some of his commentary may or may not sit well with modern day investors, who Buffett seems to almost disrespect in his words, though he may have been in his way referring to the investment environment more than individual investors.

I have already touched on succession, share repurchases and cash levels. Buffett was asked or pressed about a number of other issues as well. On that modern investment environment, Buffett referred to the fact that SPACs make it more difficult for Berkshire to strike deals with private companies. On the matter, he said "It's a killer" and acknowledged that while the SPAC craze may not go on forever that "Wall Street goes where the money is."

On the impact that retail level investors and day traders have had on financial markets, the "Oracle of Omaha" referred to these new styled investors as having entered the "casino". Not necessarily wrong as there has been in some cases a disassociation of market pricing from fundamental analysis. I believe that such matters do sort themselves out over time, and that we who have made careers either as investors or in the financial industry would probably do well to invite broader participation and democratization of the marketplace in general. I was the new kid more than 40 years ago. Doors should be shut on nobody.

On Climate and Social Change pressures, I am not sure how to read this. Measures to produce big reports on diversity and on the climate for the many business units of Berkshire Hathaway were voted down as Buffett himself referred to such reporting as "asinine." His word, not mine. When it comes to inflation and taxes, Buffett admits that his firm and others are increasing prices and that inflation is probably at higher levels "than people would have anticipated." Buffett also adds that proposed corporate tax hikes would hurt his shareholders, and that there was, based on this, no reason to alter the firm's policy of not dishing out a dividend.

Whereas obvious mistakes are concerned, Buffett seems to acknowledge that reducing his firm's position in Apple (AAPL) was probably a mistake, but downplayed selling the airlines at the lows last year, and drew attention to the size (1%) of that aggregate position, whole highlighting that the firm still has exposure to travel as an industry.

Most regular readers know that I had been long the "B" shares (BRK.B) as a key cog to my reopening trade. I really, really do like BNSF Railroad as a stand alone business and that was the cornerstone for this trade. I sold the shares ahead of earnings at $272 and change. The shares are proving me wrong at this point, but I can not complain as the trade did work its magic for me. The Pitchfork shows the post Q3 earnings trend alive and well. One might note that the gap created at that time (November) has never been filled. That does take some space in the back of my mind. That said, if one sees the period of early November through early February as a basing period of consolidation, one would place the target price at roughly $282, so I was early on this exit, but I did not trust Buffett and Munger going into this weekend and I was protecting profits. I see the shares as too close to that target to purchase at this price. 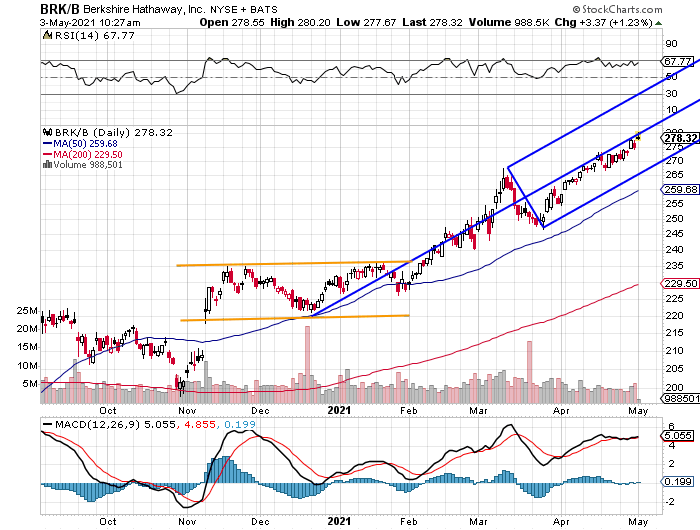 Not that we'll see one, but I would be much more comfortable to re-enter this name on a pull-back to something down around the 50 day SMA of $259 or the 200 day SMA of $229. Hopefully it won't be for many, many years, and hopefully there are retirements involved, but there is going to be an unsettling period of transition at some point for this firm and at that time the stock will act like it.

As Amazon (AMZN) transitions to the post-Jeff Bezos era, which is a known quantity, obviously the firm could counter any lack of faith shown by investors by splitting the stock several ways ahead of, or close to in sync with the event. Berkshire, especially for the "A" shares should consider something similar, as a counter to a loss of faith by the Buffett/Munger cult-like following.

(Apple and Amazon are holdings in Jim Cramer's Action Alerts PLUS member club. Want to be alerted before Jim Cramer buys or sells AAPL or AMZN? Learn more now.)

Get an email alert each time I write an article for Real Money. Click the "+Follow" next to my byline to this article.
TAGS: Insurance | Earnings | Investing | Markets | Stocks | Technical Analysis | Trading | Transportation