When Broadcom (AVGO) bought CA, most of Wall Street appeared to hate the deal initially. While I'd love to say I was pounding the table to buy it, I wasn't, but I wasn't pounding the table to sell it. Instead, I saw the deal for what it was. Broadcom was buying a cash stream, an annuity really. Defining the deal as a win or a loss was going to come if Broadcom did indeed see the cash flow and how it used it.

After the bell on Thursday, investors had a chance to examine how the ongoing CA integration was impacting Broadcom. I'd say Broadcom did not disappoint. The company reported free cash flow of own $2 billion, a 39% increase year-over-year. Furthermore, management is projecting $10 billion of cash flow for the fiscal year. It appears as though Broadcom's intention is to put that cash to the work in the form of shareholder return.

During the most recent quarter, Broadcom repurchased 14.2 million shares for a total cost of $3.513 billion, which works out to an average cost just over $247 per share. Additionally, a quarterly dividend of $2.65 will be paid over the next year. That works out to an annual yield of 3.5% on the dividend plus another 3.3% for the QUARTERLY buyback. Management is targeting a return of $12 billion via buybacks and dividends during 2019. That would be a huge 11%+ capital return in a single year. 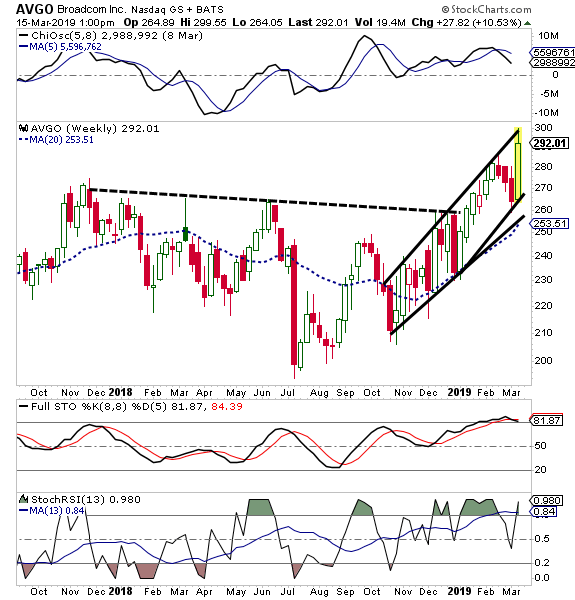 Taking all this into account, I still view Broadcom as a cash flow play rather than a growth story. Revenue growth in the high single digits to low double digits won't wow too many folks, but it's not like it's a bad thing. Earnings per share should benefit from the continued strong margins and retirement of shares. With all that being said, I view Broadcom as a blend play rather than a growth story. I believe it has a place in a portfolio as a balance for aggressive portfolios or work as the higher end risk entry in a low to moderate risk portfolio.

Get an email alert each time I write an article for Real Money. Click the "+Follow" next to my byline to this article.
TAGS: Earnings | Investing | Stocks | Technical Analysis | Trading | Semiconductors & Semiconductor Equipment | Software & Services | Stock of the Day