Let's talk about...Boeing (BA) . Readers may recall that I last addressed this name back in mid-November. The FAA (Federal Aviation Administration) had just approved the 737-MAX for a return to commercial use after a very lengthy (20 months) grounding due to the MCAS stall-prevention system that had been found to be the cause of two fatal accidents costing 346 lives. I wrote to our readers that day that my trade had been predicated upon a pop in the stock based on such news and I did take off a partial. I feared that perhaps the pandemic might make the order backlog of 3,400 737-MAX aircraft suspect, as buyers went elsewhere, and as the pandemic created a severe lack of demand for air travel. The stock sold off, then rallied even higher, then sold off again...even harder. This name has been a good trader. That said, as we near the final days of 2020, I find myself long more shares of Boeing than I have been at any other point this year. Your question... "What now?" My answer... "I don't know for sure but I have an idea."

The news cycle has not been particularly kind to Boeing, as the once great industrial corporation has now gone through an extraordinarily embarrassing period in its history. Legislation has been passed by Congress and signed into law that will mandate increased oversight of aircraft manufacturers by the FAA. The FAA will have to report back to Congress of progress made by Boeing in the implementation of recommendations made in order to get these aircraft back in the skies. Let's not forget that Boeing still faces an ongoing criminal investigation into everything that occurred in, around, and after those two fatal crashes. That said, let us also not forget that these guys are not those guys. New-ish CEO David Calhoun has been put in the position of cleaning up the mess created by someone else. Let's hope he is more Larry Culp than John Flannery.... if you know what I mean.

Last week, it became clear that even as the pandemic had driven deliveries down 35%, that Airbus (EADSF) would, for the second consecutive year, win the title of world's largest manufacturer of commercial aircraft. Though Airbus had only delivered 477 aircraft year to date through November, Boeing had delivered just 118. Ouch.

Word breaks that the Covid-19 vaccine developed by AstraZeneca (AZN) is now on the doorstep of authorization in the UK. Then there were three? Johnson & Johnson (JNJ) stands in the on-deck circle. Perhaps four. Novavax (NVAX) heads into Phase 3 trials. Word is that the planet may not return to normal until late in 2021. Word also has it that noticeable improvement in the way we have been living may be visible as soon as March or April.

Suddenly, American Airlines (AAL) announces that today (Tuesday), the carrier will fly paying customers between New York and Miami... on a 737-MAX jetliner. United Airlines (UAL) , Southwest Airlines (LUV) , and Alaska Air Group (ALK) all plan to return the 737-MAX to service at some point during Q1 2021.

More good news. You know the National Defense Authorization Act that President Trump vetoed, and then the House voted overwhelmingly to override the veto, so now it goes to the Senate? Yeah, that one. That bill calls for $740.5 billion in defense spending for fiscal 2021. There had been great discussion over whether or not in the wake of this pandemic that certain very expensive fiscal budget allocations may have to be adjusted, that defense could get hit. You know where the defense budget landed for fiscal 2020? $738 billion. That's right, a small increase, but still an increase when reductions were certainly very understandable.

Don't get me wrong. I'll never complain about a large defense budget, but this was one year I really did not expect it. This is good for Boeing by the way, as this not only gets the troops paid, but it keeps all of the expensive programs such as hypersonic and space based weapons where there is no alternative but to keep up with the Russians and the Chinese on track.

Boeing has been a good name for me this year despite not touching it until October. Basically, I think Boeing returns to normal as we do, as the airlines do... but with the defense contracting business as a foundation to rely upon. No easy way to return to a more normalized cash flow. This could take anywhere from a year to three years. 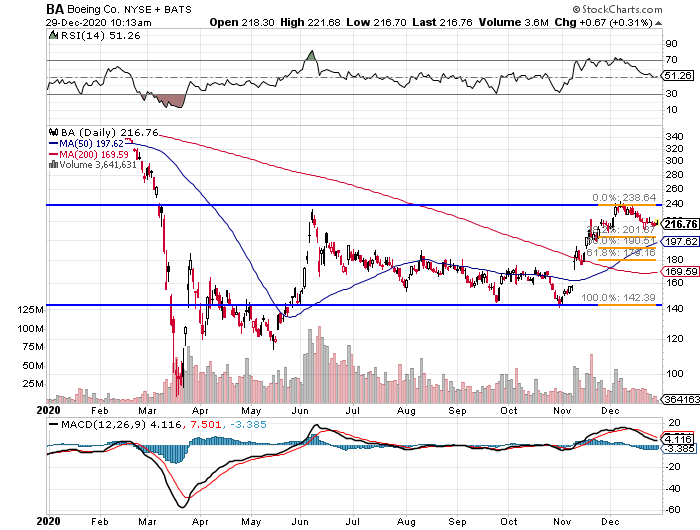 Does it bother me that the shares stalled in the same place both in early June and early December? Kind of. It does turn the whole period into a quasi-flat base. For me, I have come around to thinking of Boeing as an investment. Perhaps I will do with Boeing what I have always done with Amazon (AMZN) . That is to trade a small portion of an overall allocation around a core position. The trading is a day to day (or even hour to hour) thing.

As for the investment, I think I back up the truck a little bit should prices deteriorate to the point of threatening the area on the chart in between $197 and $201. I see no reason, should the vaccines stay on track, that this is not a $285 stock at some point in 2021.

(Boeing and Amazon are a holdings in Jim Cramer's Action Alerts PLUS member club. Want to be alerted before Jim Cramer buys or sells these stocks? Learn more now.)

Get an email alert each time I write an article for Real Money. Click the "+Follow" next to my byline to this article.
TAGS: Investing | Stocks | Technical Analysis | Trading | Aerospace | Airlines | Defense