Surprised? Earnings? Not really. Guidance? Definitely not. The business had been in decline for quite some time. Tastes had changed. The center aisles of your local grocery became a bastion of just a few middle aged shoppers, but certainly not nearly as crowded as some other areas of the store.

For the firm's fiscal second quarter, which ended this past February 23rd, Conagra Brands (CAG) posted adjusted EPS of $0.47, which missed consensus view. These earnings came on revenue of $2.56 billion, a number that also fell short of expectations and was good enough for year over year "growth" of -5.5%. By segment, Groceries & Snacks printed down 9.5% ... Refrigerated & Frozen, down 1.6% ... International, down 3.2% ... and Food Service, down 8%. Adjusted gross margin contracted. In other words, there were no obvious bright spots. Yet, the stock popped.

I don't know how many weeks ago it was. Maybe three. Maybe four. Panic had hit New York. Toilet paper? Gone. (So, far... never to return) Paper towels? Gone. Canned food? Pasta? Breakfast cereal? Gone, gone, gone... and in some cases still only returning sporadically. Then, Chef Boyardee. The staple of youth. Gone. Now, it's serious.

Back in February the firm cut full year guidance. There had been weak order flow from a business to business point of view. Retail sales were going the wrong way as well. Enter a global pandemic. Suddenly, as restaurants closed, and fresh food disappeared from those popular aisles at your favored grocer, non-perishables became everyone's culinary choice. It's not just canned spaghetti and meatballs. It's microwavable popcorn. It's frozen prepared meals. It's items that make cooking at home easier, or taste better. Suddenly, there was demand. Demand for what firms like Conagra Brands, Campbell Soup (CPB) , or even Kraft Heinz (KHC) do.

So, Conagra ventures out now to put into place an optimistic view of what lies ahead for the current (4th) fiscal quarter. Suddenly, and the firm does understand that this is pandemic driven, previous full year guidance looks light. 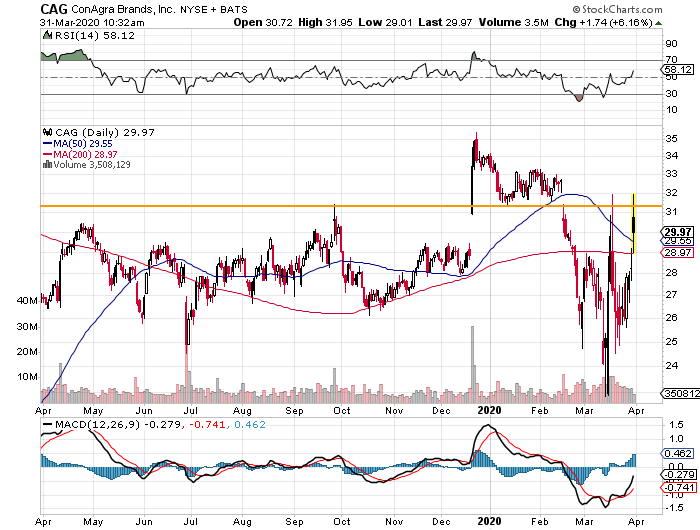 A couple of items stand out to me here. Yes, the daily MACD and Relative Strength both look better. That said, the shares stalled out on Tuesday morning, almost precisely where they stalled two weeks ago, and where they stalled in September as well. I have been back in this name since the day I saw those empty shelves. I have no false illusion about striking it rich in this name, but a staple such as this can have a place in my portfolio. Besides, the shares do come with a dividend yield of 3% at a time where many firms are pulling back from returning anything to shareholders.

My target price is $36, if for no other reason, that it would a break above the spike of last December. I will not sell more than a partial even if we do see that level, and yes, I will be adding in the low to mid $20's given a chance. In the meantime, Amazon (AMZN) just notified me that my case of Chef Boyardee lasagna will be delayed a few more days. Not surprised.

Get an email alert each time I write an article for Real Money. Click the "+Follow" next to my byline to this article.
TAGS: Earnings | Economy | Investing | Stocks | Technical Analysis | Trading | Food & Staples Retail | Consumer Staples | Coronavirus