So here we are, staring at the week where we should see an oversold reading.

Yet that was not the case two weeks ago. We were overbought and sentiment, using some metrics had moved to more neutral positions. For example, the Investors Intelligence bulls had gone from 38% to 46%. As of this writing they still reside in the mid-40%. I expect we will see that fall with this coming week's reading. Many have asked me to speculate where I think they might be and my initial thought was 40%-ish but I suppose it is possible we see them lose 10 points to the mid-30%. Perhaps more interesting will be to see if the bears can lift much off the 20% they seem stuck at.

We have seen the American Association of Individual Investors' weekly survey swing back to very bearish (bears almost 50%; bulls at 20%). We have seen the Market Vane Bulls at 50%; they were at 47% at the 2016 lows. 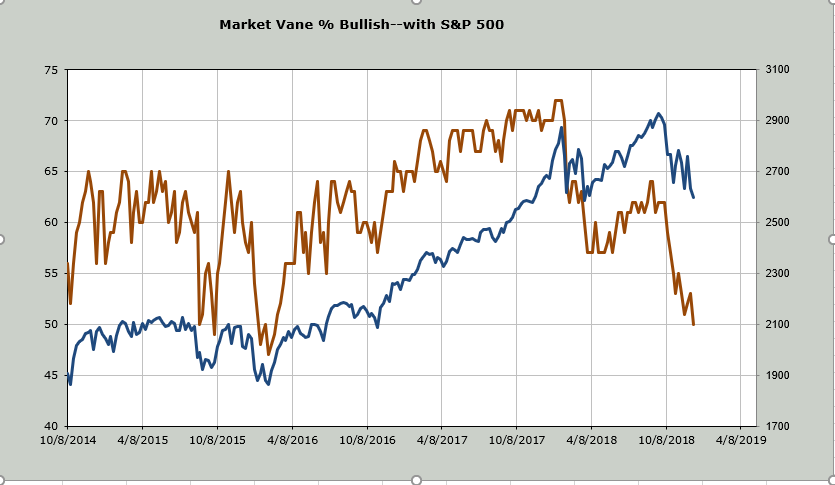 The chart itself currently shows a higher low (blue line) vs the mid-October low (green arrow). If it can keep the higher low it shows a minor positive divergence. That is still very much questionable though.

Now let's look at the numbers behind the chart. As you can see we still have two days of positive numbers to drop before we head into a string of negative numbers. And those are not mild negative numbers since there are three days with quadruple readings. The thinking is that if we replace Wednesday's reading of -2,071 (this is advancers minus decliners) with something like we saw on Friday, which was -1,560, the Oscillator rises because it's less bad, or not as negative.

Remember Oscillators are momentum indicators so we are looking for the point where upside or downside pressure starts to ease. And using this metric, it's midweek this week. The Nasdaq Momentum Indicator, which uses price not breadth, will get oversold at the end of trading on Monday.

The Daily Sentiment Index (DSI) is currently at 13. Should we fall on Monday I expect it will go under 10 and when this short-term indicator goes under 10 and the market is oversold we typically get a rally.

I am not trying to be Mary Sunshine. The market is not in good condition and there is no buying interest, but at least the indicators are in a different place than they were two weeks ago. Now we're almost oversold and some sentiment indicators have moved back to too bearish. I think we'll get a rally this week.