Right around when lunch ended for folks on the east coast on Friday, buyers got a bug in their shoes. Since then, there has barely been a whiff of selling outside of the little bit of craziness we see during the last 10 minutes of the trading day. Even June oil getting smacked 27% and Diamond Offshore (DO) filing for bankruptcy has created any doubt for buyers. And we're seeing them come into small caps and financials in droves, two asset classes that have trailed as of late. Perhaps, it is another round of PPP or Deutsche Bank's (DB) stronger than expected quarter, but the fact we ignored oil so blatantly boggles the mind a bit. Yes, markets are forward looking, but we're trading as if the economy will reopen quickly and stronger than before while low oil will have no ill longer-term impact on financials, jobs, or the economy. There is a non-stop bid under the market that goes beyond the Fed. We have the benefit of the Fed put market yet again.

Check out the trend chart of the Russell 2000 ETF (IWM) beginning at 1 pm EST on Friday as we close in on lunchtime Monday. Note all the white. That's buying. You can basically count on one hand the red non-doji bars. Outside of the blip at the open today, which combines the crazy closing action of Friday to the first early print today, it has been a non-stop move higher of 4%+ with impressive consistency. We don't see too many big bars, but rather a million little paper cuts shredding shorts to death. 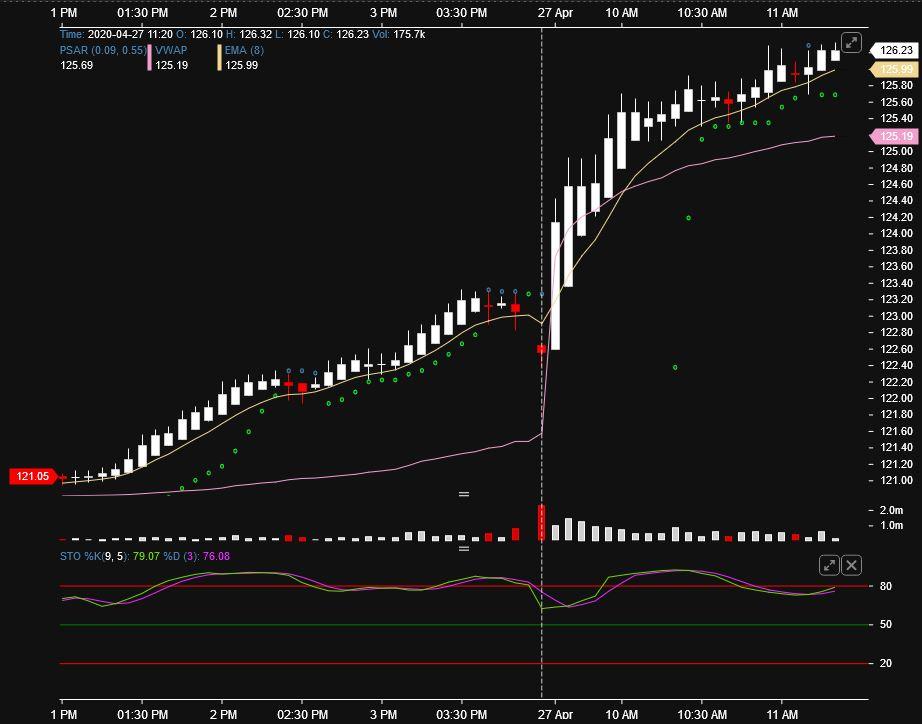 If we look at the daily chart, we may understand why. IWM appears to have a date with its 50-day simple moving average (SMA). It's the only one of the big three (S&P 500, Nasdaq, and Russell 2000) that has not touched its 50-day SMA since the selloff of March. We appear destined to see it, possibly today. 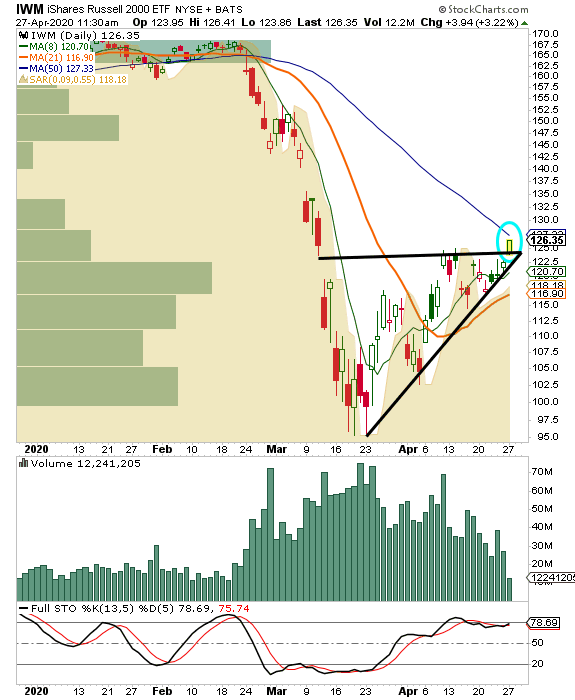 But back to the chart with the white and red bars. What this demonstrates, in my view, is more of a lack of sellers than a fear of missing out (FOMO). If we were seeing FOMO, then I would expect more big bars, larger pushes higher with pullbacks that are bought. Instead, we're seeing a slow march higher. If you've been riding the trend higher, first congrats and pat yourself on the back. Second, depending on how long you've been riding the trend, we're getting to the point where the short-term downside may not exceed the short-term upside. I may be wrong, but there are a few, albeit small, bearish divergences creeping up on the daily charts. Keep your buys close and your sell stops/trailing stops closer. I think our optimism may be riding a little too high.

Get an email alert each time I write an article for Real Money. Click the "+Follow" next to my byline to this article.
TAGS: Economy | ETFs | Federal Reserve | Investing | Markets | Oil | Options | Stocks | Technical Analysis | Trading