Disappointed? No. Not really. Not exactly euphoric either. McCormick & Co. (MKC) reported the firm's fiscal third quarter performance on Tuesday morning. If you wanted to get in on these shares ahead of the numbers, you did not miss your opportunity. I don't think I see anything where I would want to get short the name either. At least not after the fact. I think that I have to think about this one... if you know what I mean.

For the quarter, McCormick reported EPS of $1.53. This beat the street by a penny, and was good enough for year over year growth of 5%. Revenues rang in at $1.43 billion. That itself was a slight beat, as well as annual growth of 7.5%. Once again, in this pandemic world we must live in, the Consumer Segment carried the firm, growing sales 14.7% from the same period last year to $910.9 million. Consumer Sales in the Americas actually increased by an impressive 17%. The Flavor Solutions Segment experienced a decline in sales from last year of 2.9% to $519.4 million.

Flavor Solutions includes commercial demand, which has actually been under pressure across most markets. Consumers have been cooking at home more than ever for six months now, and it shows. You know the brands from McCormick herbs and spices to Grill Mates to Lawry's to Zatarain's to French's. Who does not have Frank's Red Hot at the ready? My children, in their twenties, put that stuff on everything.

I am a little behind thus far Tuesday. The opening bell has rung, so I am managing my P/L with one eye and watching McCormick with the other. The shares were trading with a $187 handle down 4%, and have already traded as low as $183.22 in the regular session. Got to love the electronic era. Actually, no, no... you do not.

What's not to like? The firm did announce a two for one stock split. Apparently selling some nice products that make other things taste good is not the same as splitting as the public's favorite manufacturer of electric vehicles, or being the greatest consumer electronics brand of all-time. (That was a reference to Tesla (TSLA) and Apple (AAPL) for those moving a little slowly this morning.) That's okay. I move slowly every morning until I'm sure that I am on this side of the dirt, Then I loosen up a little. Both the common and non-voting shares will split.

The split does not seem like it would be a negative, though the shares do trade at 34 times forward looking earnings and let's face it... the S&P 500 trades at 20.9 times, and the Staples as a sector at 20.3 times. So... it might be said that McCormick has become expensive, especially if the public health situation improves and the idea of "pent up" demand for dining out becomes reality. That could be seen as a potential forward looking negative.

It is beyond that though. The firm's own guidance is not overly optimistic. The firm now sees full year adjusted EPS landing in a range spanning from $5.64 to $5.72. This would be up from 2019's $5.35, but below Wall Street that had earnings up in the $5.76 to $5.79 area. The frim also sees full year revenues rising toward the upper end of a 4% to 5% estimate. Wall Street was at 3.5% on this one. The problem? Wall Street has McCormick making more money per share on less revenue than the firm expects. The implication would be pressured operating margin, which at 19.1% was indeed down from a year ago at 19.7%. In the era of Covid, inconsistency in margin is indeed quite understandable. It just may have not been properly priced in. 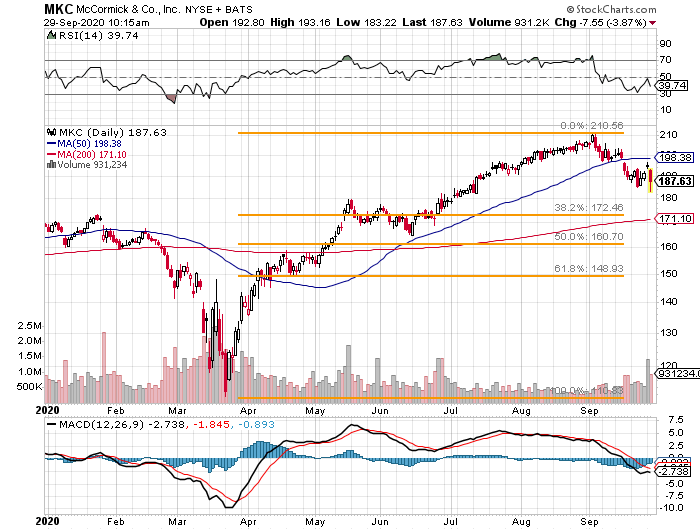 After the numbers, it looks like the shares have failed upon approaching the 50 day SMA. The shares now suffer the possibility of a gravitational pull toward the 200 day SMA just above the $171 level. This also happens to be very close to what would be a standard 38.2% Fibonacci retracement, giving the spot more reason for consideration.

This is the gist of what I am saying. I think McCormick is executing well, and also well managed. I just also happen to think that the shares are overvalued for what they offer. If this were a dividend stock, I would feel more easily compelled to take on an entry level long position. As it is, MKC yields less than 1%. I will, for now, take a hard pass unless the shares sell off considerably harder.

The MKC December $170 puts are trading close to $4.50 a pop. Those look more interesting (for a sale) to me right now than an equity position.

Get an email alert each time I write an article for Real Money. Click the "+Follow" next to my byline to this article.
TAGS: Earnings | Investing | Stocks | Technical Analysis | Trading | Food & Staples Retail | Consumer Products | Coronavirus