What was that? Maybe you caught that headline as well. "Home Depot (HD) downgraded to Perform from Outperform at Oppeheimer." Okay, tell me more. Oppenheimer analyst Bian Nagel is a very highly rated analyst according to TipRanks. I mean very highly rated. Not just five stars, that goes without saying here. TipRanks rates Nagel at number 12 of the 6,942 analysts the service follows. That's better than impressive. Nagel downgraded the stock,while taking his target price down to $305 from $320. The shares closed on Thursday at $279.96. Just FYI, Nagel also downgraded Lowe's (LOW) this morning. He sees a post-virus slowdown for the two firms but feels that Lowe's has the better post-pandemic set-up of the two. Both stocks were lower in early trading Friday as one might expect.

... August 18th. Home Depot reported the firm's second quarter precisely one month ago today. The numbers were indeed very impressive. 27% earnings growth on 23% sales growth. Comp sales growth was just as impressive, at 23.4% globally, and 25% in the U.S. The industry was looking for far less. The shares traded above $290 that day, and a few dollars higher a few days later. Nagel, by the way, reiterated his "Outperform" that day.

The metrics beneath the headline numbers were equally impressive, Gross margins were higher. Inventories were lower. Sales per square foot were higher. (Not easy to do for brick and mortar retailers this year.) Aggregate customer transactions were higher as was average ticket size. About the only negative, and it is for a good reason, was increased expenses. The firm spent more making locations safer for employees as well as shoppers, and on weekly bonuses for hourly employees. This kept operating margin in line.

I wrote at the time that the shares appeared to be technically overbought. Apparently, they were. I have been in and out of the stock. I am flat right now, but I did set up a trade idea that if followed and left in place for the past month would have left the trader with a net basis of $273.75, with increased equity risk at the $250 level in November. Traders could at this point buy back both the November $310 calls for about a $3 profit, and the November $250 puts and pocket roughly $0.65. This would take net basis back up to $277.40, and that trader is still up small on the trade if one is thinking of getting out completely.

What if one is flat. Stay away, because of Brian Nagel's call? His reputation is so good for a reason. 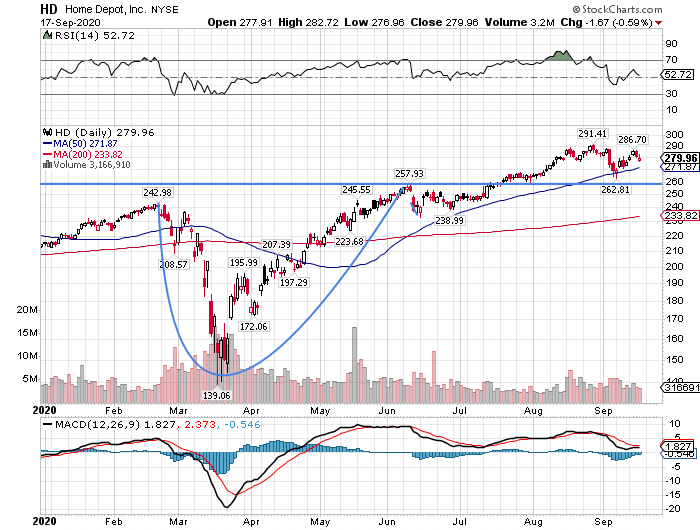 For one, the shares are not nearly so overbought at this time. That said, the shares have held the 50 day SMA very nicely. Yes, I saw housing starts cool off a bit in August after Congress let the unemployment stipend lapse. Existing Home Sales are more important to Home Depot. Yes, construction is better for employment, but most of the housing market is in existing homes, people fix up existing homes, and it is no secret that people are fleeing densely populated areas.

Existing Home Sales for August are due next week. They were hot as heck in July, better than anything seen in all of 2019 and 2020 for that matter. The expectation for August is even higher than July. You think these people aren't going to fix up their yards, their basements, the roofs? Oh, they will, and the storms hitting the Gulf Coast only accelerates the demand. Related, but not really, copper ( the commodity) looks like it was fired out of a cannon in March. Still going.

Get an email alert each time I write an article for Real Money. Click the "+Follow" next to my byline to this article.
TAGS: Investing | Stocks | Technical Analysis | Trading | Housing Market | Household Products