The month of May has been good to this point to Ford (F) shareholders. It was not just the massive first quarter beats on both the top and bottom lines, reported in late April, that caught Wall Street's attention. It was not just the hottest print for the firm's accelerating revenue growth seen in years. It was probably mostly to do with the firm's underrated electric vehicle program that I have been telling you for months was underappreciated. How much did I believe in Ford? I have already taken a profit on half of my long position, leaving what is still more than a full position and still stands as my second largest long in terms of weighting this now.

The firm has already released the Mustang Mach-E  and it's profitable, and Ford now has plans to take both the Mustang coupe and convertible down "Electric Avenue" in the near-term future. If only there were an electric version of the coolest vehicle on the road, the F-150 pick-up. If only.

Today is Wednesday, May 26th. Today is Ford Motor Company's "Capital Markets Day" event. Some of today's news is already out (...and you thought Ford Motor would let General Motors (GM) and Mary Barra get way out in front.)

Ford Motor will spend more than $30 billion on electrification by 2025. The way I read this, it looks like the firm will also spend $7 billion on vehicle autonomy. Ford expects 40% of the firm's global vehicle volume to be fully electric by the year 2030, but has not commented on the future of the firm's traditional fossil fuel combustible engine vehicles. GM for that matter, plans to be all-electric by 2035, spending $27 billion on the transition.

Ford will develop two EV platforms, one for trucks and SUVs, the other for sedans and smaller SUVs, in an attempt to contain costs and streamline logistics. These platforms should be ready for the second generation of Mustang Mach-E's and F-150 Lightning pick ups.

In addition, Ford will create Ford Pro, which will be dedicated to providing services and the logistics of distribution to meet the requirements of commercial and government fleets.

Ford can now point to more than 70K reservations for the F-150 Lightning. The all-electric pick-up will offer two battery sizes, one with a 230 miles range on a charge, the other able to range as far as 300 miles on a charge. The base F-150 Lightning is expected to sticker at $39,974, while a mid-level model will be advertised at $52,974. The price tag can get as high as the low $90K's if one desires and can afford every amenity. Ford also expects to put an all-electric E-Transit commercial van on the road by year's end.

Bobby Howfield? The firm is not afraid at all to take on Tesla (TSLA) , GM, or Rivian, which has the backing of Amazon (AMZN) , as all are headed to market in short order with electric trucks and vans of their own. Ford says it will exceed Tesla in volume by July 2022. That's a year, gang. Tesla's near monopoly in the electric space had already been under pressure, but now it's truly over... as in Kaput. From here it's going to be about quality and scale.

That said, what matters is going to be connectivity and constant battery improvement. Ford will lean on the BlueOvalSK joint venture with SK Innovation to manufacture battery cells and arrays at two plants in the U.S., one for Fords, the other for Lincoln. On connectivity, Ford also says that the firm will have more than one million vehicles on the road in 2021 capable of receiving "over the air system" updates, ultimately scaling to 33 million enabled Ford and Lincoln vehicles by the year 2028.

When the country was on its knees and thought tens of thousands of ventilators would be needed as COVID ravaged our people... Ford Motor, unlike some competitors, stepped up to the plate when their nation called, not needing then President Trump to invoke the Defense Production Act to do the right thing. Some folks may forget. I never forget when someone does something out of duty. For that alone, I am far more likely to buy a Ford vehicle or invest in the company. They say, investors can't trade with their hearts. Well, this time it's different. I have worn the flag on my shoulder forever. In uniform, and on my NYSE trading smock. Take off my shirt? If you think you can. That flag. Our flag is still there.

Knocking on the Door 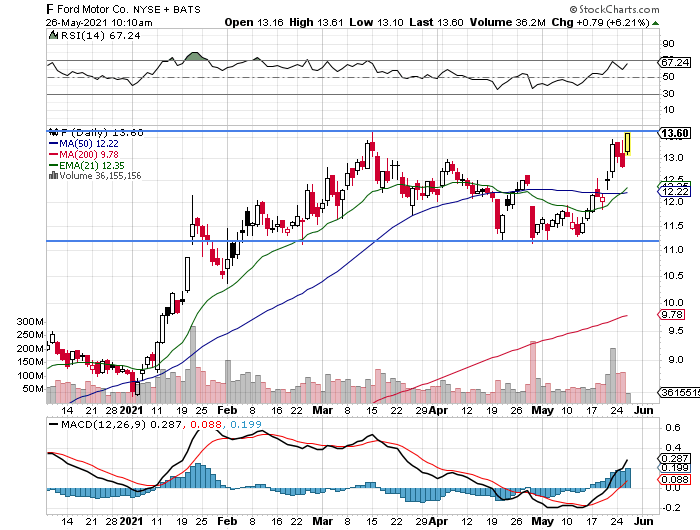 If you follow me closely, then you already know we have a $17 target price. First things first. The pivot stands at $13.60, which is where the stock is trading. The stock is getting a little help today from a mini (swing trader's) golden cross... the 21 day EMA crossing above the 50 day SMA. The best part, for me, is... no gaps to fill. For a panic point, I don't think I will break and run unless that 50 day cracks hard.

I really think Ford is solid. My plan? Buy on dips. Take off partials on spikes. Stay long a sizable core position. Simple enough. Going out to August one can still get paid $0.50 for $12 puts. That's $11.50 if you get tagged. Not so bad for a stock trading at $13.60 this morning. That's my opinion.

(Ford and Amazon are holdings in Jim Cramer's Action Alerts PLUS member club. Want to be alerted before Jim Cramer buys or sells F or AMZN? Learn more now.)

Join us on May 26th for Real Talk, a special Real Money webinar featuring reopening portfolio picks from Chris Versace, Stephen "Sarge" Guilfoyle and Ed Ponsi. Sign up for the webinar to see them discuss and debate their portfolios.

Get an email alert each time I write an article for Real Money. Click the "+Follow" next to my byline to this article.
TAGS: Investing | Markets | Stocks | Technical Analysis | Trading | Automobile Components | Automotive | Electric Vehicles