It's hard to get excited about Levi's. It's hard to get anything actually. There's nothing glaringly negative about the company's first quarterly results as a public company, but there's nothing pound the table buy the stock either. It's a better than some, worse than others, middle of the road report. As a new issue, that won't cut it. With a valuation near $10 billion, blaming the costs of coming public as your reasoning for a sharp drop in net income isn't a great look. While it is true the costs of the IPO accounted for 60% of the net income decline, there's still the matter of the other 40%.

But this is what companies do with their PR. They spin. If the lead on the bad news states that the majority of the net income decline was due to the IPO costs, the hope is investors only read that line and they think to themselves: yeah, that makes sense and it is only a one-time thing. It draws attention away from the other portion of the decline. Also, by using the word majority, the company isn't wrong, but majority could be 51%, 60%, 75%, or 90%+.

Levi Strauss & Co. (LEVI) isn't alone in this game. Just about every company does it. After getting hammered by Health Canada for non-compliance, recent NYSE uplist CannTrust (CTST) put out the following statement:

"Our team has focused on building a culture of transparency, trust and excellence in every aspect of our business, including our interactions with the regulator. We have made many changes to make this right with Health Canada. We made errors in judgement, but the lessons we have learned here will serve us well moving forward," said Peter Aceto, Chief Executive Officer.

It doesn't come any more vanilla and useless than that. Let's be honest, nothing about the recent CannTrust news is going to serve them well moving forward, but back to Levi's.

Headlines also talk about revenue topping views. Revenue came in at $1.31 billion while estimates were $1.30 billion. That is a beat of less than 1%. Technically, it is a beat, but against estimates, it is nothing more than a rounding number. In reality, this result is inline. I'd say the same thing if the number were $1.29 billion as I have with other companies. Everyone has their own viewpoint, but anything less than 1.5% is insignificant to label as a beat or miss.

The company does maintain a solid cash position with cash and short-term investments equal to around 10% of the current market cap while debt is slightly less than 1% of the current market cap. Direct-to-consumer growth did demonstrate continued strength landing at 9%. This is a decent number, but with so many retailers seeing double-digit DTC growth, 9% is nothing to get excited about.

Free cash flow dipped to $39 million over the past six months. I don't expect that to improve much as the company plans 100 new company stores in 2019 with capital expenditures in the $190-$200 million range. Also, Black Friday won't be included in the current fiscal year results due to the timing of the FY end and the late date for Black Friday this year. That should make for more attractive numbers next year. 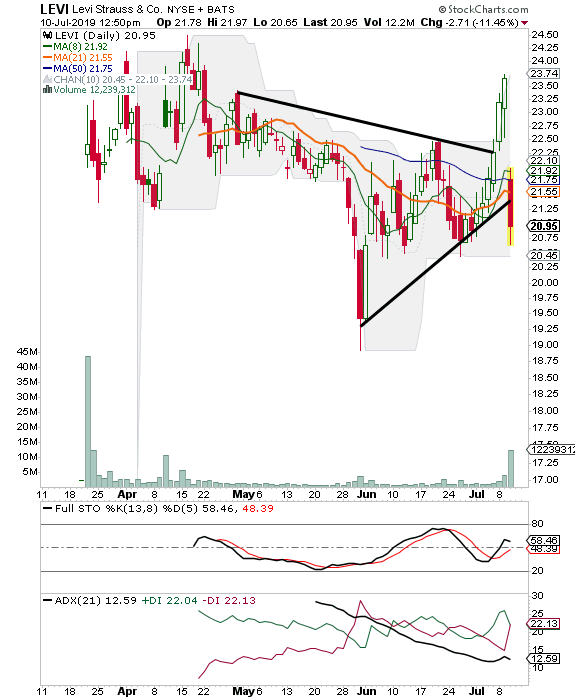 The stock has less than four months of trading data, so today's big drop might not have the same impact as a longer tenured public company. The disappointing fact for bulls is shares had just broken out higher from a wedge pattern, but today's drop completely reverses the good of the past week. I hesitate to call this a breakdown after a breakout. Rather, I'd say the wedge pattern is now invalid. We'll want to watch $20.45 for support and $22.25 as resistance.

Despite the negatives mentioned above, LEVI is more an avoid than a short. In terms of retail, there are worse names a trader could be stuck in and better names to be long. I'd let at least a week play out before taking a second look. Heck, I might let several weeks play out. I simply don't see the urgency to get excited about Levi Strauss.