For the firm's second quarter, Nvidia (NVDA) posted adjusted EPS of $1.04, GAAP EPS of $0.94, and revenue generation of $6.51 billion. All three metrics present as comfortable beats of expectations. What it boils down to is 89% earnings growth on 68.2% revenue growth. This was the seventh consecutive quarter that Nvidia achieved sales growth of 39% or more.

Readers know that I draw the line for what is a growth stock and what is not... at a rough 40%. Nvidia, even after all this time, and at a market cap of $475 billion, is still a growth stock and that growth is still accelerating despite shortages across the industry. So, Nvidia drove record total revenue on record gaming revenue and record data center revenue.

Gaming remains the firm's largest business. Gaming contributed $3.061 billion to the pie, up 85% and above consensus. The driver here is the GeForce GPUs. The firm also had the foresight to design a specialized cryptocurrency mining processor that can not be repurposed so as to put a halt to the cannibalization of sales between business lines.

The Data Center is again, a tremendous driver. The Data Center posted sales of $2.366 billion, up 35%, and also above consensus. Remember, this now includes the Mellanox acquisition as it did in Q1. Professional Visualization put together sales of $519 million over the three month period, up 156%, and also a beat of expectations. Nvidia will be a key player as a number of other "tech" firms put together the "Metaverse" which is being described as an internet that you access through an avatar live and move in, rather than look at. 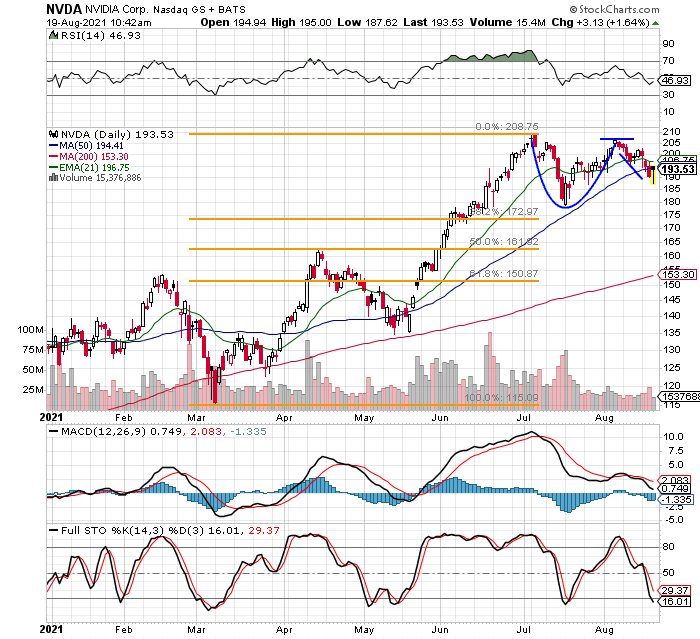 There is a lot to see here. Relative strength is neutral. The Full Stochastics Oscillator says NVDA is technically oversold. The daily MACD looks fairly awful. On the bright side, the shares seem to have found Fibonacci support in early July and have gone on to form what looks to be an incomplete cup with handle pattern.

Unless... that's not a handle.

If the shares keep going lower, then we do not have a cup with handle, we would then have a "double top" reversal, which would be bearish. I re-initiated the name with a long position going into last night's earnings report. For me, the 50 day SMA is key. Currently that line stands at $194, and the shares a touch below that, but we can not yet say that the level has broken. I'll add down to the low $180's, but we hit the high $170's and I have to start thinking that I was early. If this is a cup and not a double top, then the pivot is $207, producing a target price of $250. First things first. First, that 50 day line.

Get an email alert each time I write an article for Real Money. Click the "+Follow" next to my byline to this article.
TAGS: Earnings | Investing | Stocks | Technical Analysis | Trading | Semiconductors & Semiconductor Equipment | Technology | Technology Hardware & Equipment