When Earnings Are Not The Story

Under Armour (UAA) posted third quarter earnings on Monday morning and nobody cared. The far bigger story had been reported first at The Wall Street Journal and then everywhere else that the firm is cooperating with investigators at both the SEC (Securities and Exchange Commission) as well as the Justice Department regarding past revenue recognition accounting. At stake it appears is whether or not sales had been shifted from quarter to quarter. It is important to note that the firm acknowledges the probe, and flatly states that it's "practices and disclosures" were appropriate.

Making the story even more interesting would be the firm's announcement in late October that CEO Kevin Plank would be leaving that post to be replaced as of January 1st by Kevin Frisk who has been with the firm since 2017. Plank is not leaving the firm, and is expected to ascend to the role of Executive Chair as well as Brand Chief.

There Was Still a Quarter

For the third quarter, Under Armour reported EPS of $0.23, While that print checks in at earnings growth of -8%, it was better than consensus view. The firm generated sales of $1.43 billion. The top line also printed in contraction, and also beat expectations.

There are certainly some performance based warnings signs once one pops the hood. The strength came from abroad as International revenue showed a 5% increase versus a 4% decrease in North America. Wholesale revenue declined as did direct to consumer. That's troubling. Though the firm's direct to consumer sales only printed at -1%, that's a line that many players in the retail scene are showing strength in even as other business lines seem to struggle. In a world that no longer embraces the mall, this line has to improve.

We'll break down the business by product type at this point. While apparel, the most important segment held it's own, producing sales of $986 million (+1%), footwear, the second most important,  fell off of a cliff, -12% to $251 million. There was good news as gross margin across all sales improved to 48.3%.

To be honest, I really can't see a good reason to invest in Under Armour even if the firm wasn't being investigated. The fact that two government agencies are looking into the firm's accounting practices makes the shares untouchable, even down 14%. What if one is already long these shares? Is there anything to be done. Let's look at the chart. 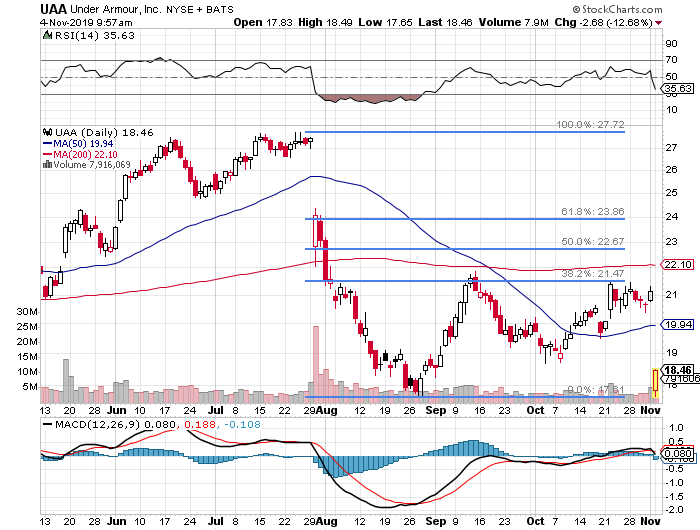 One quickly sees that the shares tested the August lows early in the session and as of mid-morning have passed that test. There is obvious resistance up around $21.50.