Broadcom (AVGO) reported the firm's fiscal third quarter financial performance on Thursday evening. The firm posted adjusted EPS of $6.96, beating Wall Street by a nickel. Sans all excluded items, GAAP EPS printed at $4.20, which was a beat of greater magnitude. Record revenue generation for the period amounted to $6.78 billion, which was a mild beating of projections. Those numbers, using adjusted EPS, amount to earnings growth of 29% on revenue growth of 16%.

Internal performance was excellent as well. Adjusted gross margin expanded to 75.1%, well above expectations, while operating profit popped 24%. Adjusted EBITDA hit $4.123 billion for the quarter on an adjusted EBITDA margin of 61%, also a record. Here's what I think is "the big one." Free cash flow of $3.4 billion represents 51% of quarterly revenue, and the firm stated that expectations for free cash flow remain strong for the current quarter.

The company reports results across two main business segments, Semiconductor Solutions and Infrastructure Software. For this reporting period, Semiconductor Solutions posted revenues of $5.021 billion, up 19% year over year, and up to 74% of total segment contribution from 72% a year ago. Within the segment, Networking grew 19% to $1.8 billion. 5G is driving that performance. Wireless posted sales of $1.4 billion, up 35%, but below consensus. That's an Apple (AAPL) story. Broadband revenue of $910 million showed growth of 23%, while Service Storage Connectivity saw revenue contract to $673 million.

The other 26% of revenue generated amounts to $1.757 billion, and is reported under the Infrastructure Software banner. This was good for 10% year over year growth. This is really a subscription business that is growing slowly and steadily but provides the firm with its highest margins.

For the current quarter (FQ4), Broadcom sees revenues of $7.35 billion, which would be 14% year over year growth. I have seen this guidance reported as below consensus. I can find 25 sell-side analysts that cover this name. I see consensus of those 25 as $7.23 billion, so I see this guidance as slightly above consensus view. The company also sees adjusted EBITDA coming in at 61% of revenue, which is where it was for the quarter just reported.

Among those analysts, I also found 13 who are rated at five stars by TipRanks and have opined on AVGO since earnings were reported last night. All 13 of these analysts rate the stock as a "buy" or their firm's buy equivalent. There was one analyst that rated AVGO a buy without setting a target price. The average target price of the other 12 five star analysts is $570.92, with a high of $600 (twice) and a low of $540. The high targets came from Harlan Sur at JP Morgan, and Hans Mosesmann at Rosenblatt. The low target came from Blayne Curtis at Barclays. 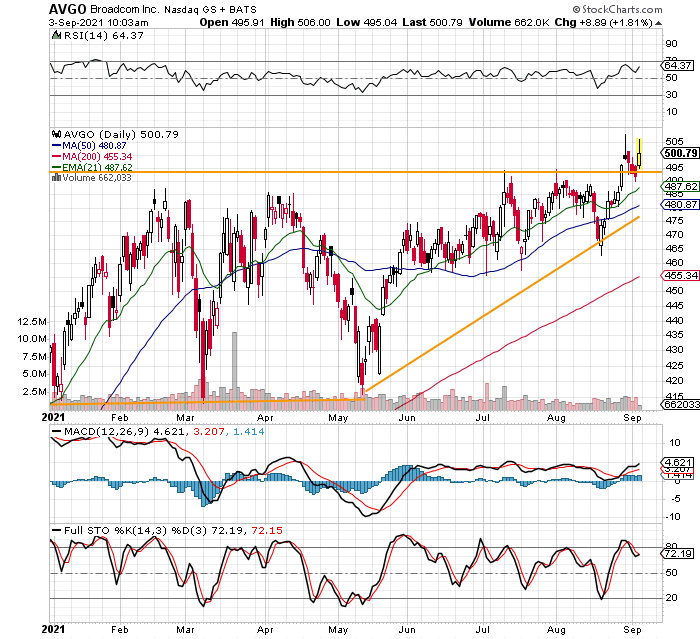 First, I am not in this stock. My favorite chip stocks remain Nvidia (NVDA) and Advanced Micro Devices (AMD) for performance, Marvell Technology (MRVL) for potential, and Taiwan Semiconductor (TSM) because somebody has to be foundry to the world, and I just don't trust Intel (INTC) to fill that vacuum.

That said, Broadcom is a great company operating at a high level. Hock Tan is an aggressive CEO and he is good at his job. If you are in this name you are not wrong. I just have to keep myself from becoming overexposed to the group.

Readers will note that in early May, AVGO turned a basing pattern of consolidation into an ascending triangle. That triangle is closing and the set-up is bullish. The stock has broken out of a $494 pivot. If I were in this name, my price target would probably be $592, and I would probably use the 200 day SMA ($456) as a rising panic point. The firm does pay shareholders $14.40 annually just to hang around. That's a yield of 2.93%... for a nearly $500 stock. Not bad. Not expensive either, trading at 17 times forward looking earnings.

Know what? Should have bought some on the overnight dip. Maybe next time. Can still sell $490 AVGO puts expiring in a week for about $2.25. Yeah, I think that's the ticket.