I've written several times in the past that the GameStop (GME) insanity wasn't done. I mean, I wish it would end because it creates an instability and insanity in the markets. When we lose all grasp of reality and it spreads beyond one stock, you create a wave of uneasiness for traders who use risk management. I'm not saying one is better than the other per se, although operating without risk management will result in far more losses than gains for most. What I am saying is the uneasiness could result in another round of sell offs or big players stepping away from the bid. This market, she needs her liquidity.

A name I'm watching for a breakout swing trade is Ship Finance (SFL) . I remember years ago when shippers were all the rage. They've been relegated to background noise with the occasional momentum pop. As world economies reopen, there's a chance for some of these shipwrecked stocks to sail the bullish seas once again.

A close above $8.10 sets SFL on a path to $9, probably $10 as traders love the draw to round numbers. We have an ascending triangle setup but could use a little help from secondary indicators. The MACD has poked its head into bullish territory while the Full Stochastics indicator tests the midline. A turn higher here, even before price, should have some traders jumping on the name. 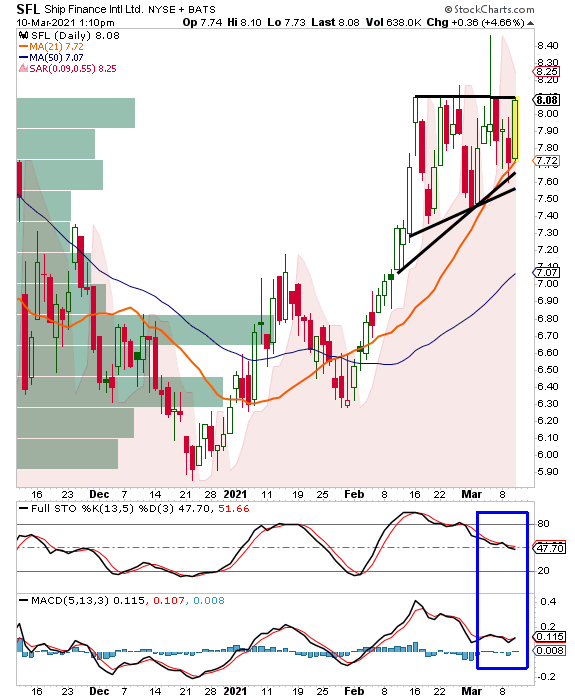 This probably doesn't end until GameStop figures out how to do a massive capital raise and actually establish some plan, with capital backing it, moving forward. Ironically, that's when the diamond hand probably abandon ship... when GameStop actually becomes something with potential and a plan.

Get an email alert each time I write an article for Real Money. Click the "+Follow" next to my byline to this article.
TAGS: Investing | Markets | Stocks | Technical Analysis | Trading | Financial Services | Transportation