Wearing a Mickey Mouse T-shirt while I write this article.

Why would you do that?

A Mouse That Roars

The Walt Disney Company (DIS) reported the firm's fiscal fourth quarter performance on Thursday evening, and put succinctly, Disney is executing at a very high level across almost all of the firm's core businesses, while adjusting for such headwinds as integration with now in house assets purchased through the Fox deal, as well as investments made in getting new businesses up and running.

Walt Disney posted adjusted EPS of $1.07 on revenue of $19.1 billion (+33.5% y/y). Both the top and bottom line figures handily beat Wall Street consensus view. Obviously, Disney is an extremely broad and complex mix of individual business lines. Thankfully, the firm is quite transparent in their quarterly release. Total segment operating income hit the tape at $3.436 billion, up 5% from the comparable quarter in 2018. Thanks to the headwinds already mentioned, net income from continuing operations declined 66% to $785 million, while free cash flow dropped what looks to be an intimidating 85% to $409 million. Understand that this is a firm in transition, and this firm is proving that it can remain quite profitable while doing just that. This on the table... let's dig into the "guts" of the report.

Media Networks... Revenue of $6.51 billion, up 22%, beating expectations. This headline print includes Cable Networks (+20%), and Broadcasting (+26%). Both of these units experienced a small decline in operating income that in aggregate beat industry consensus. The newly acquired Fox assets did provide a boost to revenue, while programming costs at ESPN and ABC did hurt margin.

Parks, Experiences, and Products... Revenue of $6.655 billion, up 7%, beating expectations. Operating income provided from this line also beat consensus. Park attendance suffered in spots, though remained comparable year over year at Walt Disney World in Florida. There was some slowdown in Anaheim and obviously in Hong Kong. Consumer spending was however strong at the parks. As far as merchandising goes, both Frozen and Toy Story products remained drivers.

Studio Entertainment... Revenue of $3.31 billion, up 51%, just below consensus. Operating income from this unit, however significantly beat expectations, as core Disney releases such as the live versions of "The Lion King" and "Aladdin", as well as "Toy Story 4" were enough to offset losses at 21st Century Fox.

Direct to Consumer and International... Revenue of $3.428 billion, up 415%, actually missed consensus despite the mammoth growth. That said, operating losses for this unit also came in below expectations which is a positive. My personal favorite streaming service, ESPN Plus, now boasts more than 3.4 million paid subscribers, up more than one million over the three month period, while Hulu now runs with 28.5 million paid subs up 500K over three months. By the way, as of this March, Hulu becomes the exclusive streaming home for FX Networks. That brings us to Disney Plus, which will start streaming on November 12th, next Tuesday. Disney projects an operating loss of $800 million for this unit for the first quarter, which is under way.

Disney also announced on Thursday evening that their ad inventory dispute had been resolved with Amazon (AMZN) , and that the new streaming service will be carried on Fire TV on time. Add Fire TV to the Roku (ROKU) platform as well as platforms run by Apple (AAPL) , Microsoft (MSFT) , Sony (SNE) , Alphabet (GOOGL) , and Disney Plus is clearly covering all of the right bases.

CEO Bob Iger appeared to be very pleased with the results of the firm's launch of a beta version of Disney Plus in the Netherlands that revealed demand across a broader array of demographics than the firm had anticipated. Disney Plus will launch across Europe on March 31st. As for early sign-up, Iger did not disclose any specific data, other than to say that they were "good".

What we do have are projections. The firm itself guides toward a range of 60 million to 90 million subscribers by 2024. JP Morgan has forecast a rough 15 million subscribers for the new streaming service by fiscal year end 2020, and possibly 75 million by fiscal year end 2024. Morgan Stanley offers a range of 70 million to 100 million for that time frame. Measure this against the 158 million global subscribers at Netflix (NFLX) , the undisputed leader in streaming entertainment. 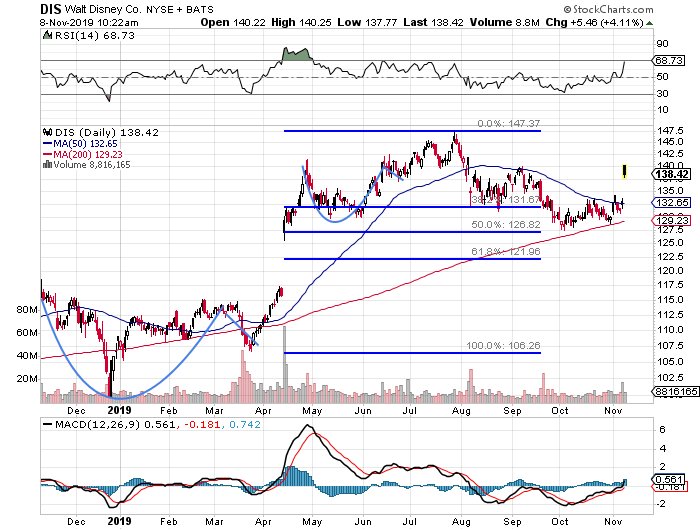 As readers can see, the shares found substantial support at a 50% retracement of the March through July rally... Honestly, though long this name, and impressed with how the firm is executing it's transition, the shares need a test at $147 in order to catapult higher. In fact, it does concern me just a little that the April gap has never filled.

Yes, I am still wearing my T-shirt. Fact is that I am going to make a sale this morning. Do I still like Disney? Yes. Do I think the shares go higher later? Probably. Fact is that I probably would have already sold this pop if I were not already writing this article. I will wait until publication so as not to run ahead of my own piece, but there is a profit to protect here, and profit is what I'm here for. Oh, I am going to sign up for Disney Plus on Tuesday.

Get an email alert each time I write an article for Real Money. Click the "+Follow" next to my byline to this article.
TAGS: Earnings | Investing | Stocks | Technical Analysis | Trading | Movies | Resorts and Hotels | Retail | Television Production/Distribution | Stock of the Day