The large banks kicked off Q4 earnings season in earnest on Friday morning. It wasn't one of those booming kicks that soars out of the back of the end zone. It was more of a knuckle-kick into the wind that flirted with bouncing out of bounds, and left the opposing in offense in decent field position. If you know what I mean. Oh, JP Morgan (JPM) ripped the cover off of the ball, as JPM Morgan is prone to do. Equity trading was awesome. Fixed Income trading did well. Investment banking was even better than trading. Wealth Management and Commercial Banking at least punched their weight. Consumer Banking sagged though, and provisions for credit losses printed above expectations.

Traders sold JPM on the news. They sold the whole group. I came in long JPM, and even with this morning's beating, I am still up close to 40% on that investment. However, I also came in long Wells Fargo (WFC) , and I was up just a smidgen on that one. Uh oh. Okay, let's go there.

First, there is a lot going on here. Why am I even in the name? Basically, for a belief that CEO Charles Scharf is the right leader to turn this bank around, get a grip on expenses, fine tune the firm's focus, increase transparency for both the public and for regulators, and quite simply restore the reputation of a once great bank.

For the reporting period, Wells Fargo posted an adjusted EPS of $0.70, which was a solid beat, as well as GAAP EPS of $0.64, also a beat. Revenue generation, however, was a sore spot. The top line landed at $17.9 billion, down almost 10% year over year, and missed the mark by roughly $100 million.

The full story gets complex. As we know, Scharf is trying to shed non-core businesses in order to refocus the firm. On Thursday (yesterday), Wells Fargo announced the sale of its Canadian Direct Equipment Finance business to Toronto Dominion Bank (TD) . No terms were announced. In December, Wells Fargo agreed to sell the firm's private student loan portfolio. Also on Thursday, Reuters reported that Wells Fargo was engaged in talks to sell its asset management business, with holdings valued at $607 billion to a group led by GTCR LLC and Reverence Capital Partners. Word is that WFC is asking more than $3 billion for the unit. Most readers probably did notice the UBS upgrade earlier this week citing Scharf's moves toward becoming a more efficient bank.

Back to the earnings report. I'll tell you what I really liked. The firm was able to drop Loan Loss Provisions to $179 million from $769 million last quarter, largely thanks to that sale of the student loan portfolio. Now, what the street is not liking a whole lot. Average deposits held steady at $1.4 trillion, while Average loans dropped to $899.7 billion from $931.7 billion last quarter. It gets worse, and this is a big one. Q4 net interest income printed at $9.28 billion, which was below estimates above $9.4 billion. Wells Fargo also showed this morning that for FY 2021, the firm expects net interest income to print anywhere from flat to -4%. Don't forget that as this firm had to climb out of a hole of its own making that it had to offer promotional "above market" interest rates on deposits in order to attract and retain funds. 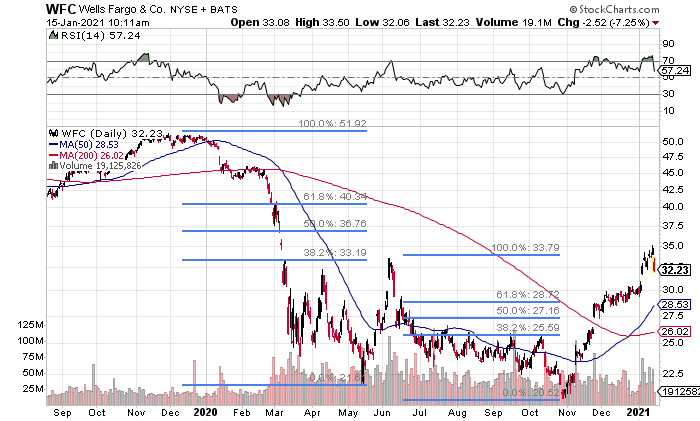 Readers will note that both the December 2019 through May 2020 selloff and the June 2020 selloff through November produced rebounds that ran smack into solid brick walls of resistance with near precision at 38.2% Fibonacci retracements of those selloffs. Not the overbought reading for the RSI that this stock came into this earnings season with after reacting positively to that "golden cross in late December 2020. Let's zoom in a bit. 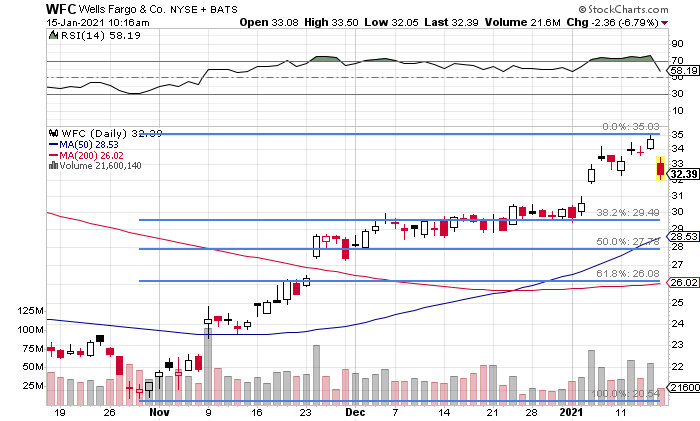 Now, let's flip the script a bit. With today's beat-down, WFC has at least approached the top of that gap created about two weeks ago. That gap in my opinion, could still need to fill. That brings us close to a $38.25 retracement of this rally. See where I am going with this. My bet is that some of these "smart" or "intelligent" algorithms do. I am not selling my Wells Fargo today (with today's 7% drop, I am down about 3% on the position), I plan to add, but I must be patient. I think based on the stock's own past behavior that I can pay between $30 and $31 for WFC if I just hang tough. I don't need to pay $32 and change right now. In case you're wondering, a WFC $31 put expiring in seven days still pays about $1.30. Sounds like a deal to me.

(JPM and WFC are holdings in Jim Cramer's Action Alerts PLUS member club. Want to be alerted before Jim Cramer buys or sells these stocks? Learn more now.)