When is bad good? When bad is better than expected. That's when. Verizon Communications (VZ) reported the firm's fiscal second quarter performance on Friday morning. Verizon puts an adjusted EPS of $1.18 to the tape, which did beat consensus view. The firm also produced revenue of $30.4 billion. That number, due to the impacts of the pandemic, amounted to a year over year decrease of 5.3%, but it also beat the street.

Readers will recall that Verizon had already suspended the firm's prior revenue guidance earlier this year, and had guided adjusted earnings to a range of growth spanning from +2% to -2%. One positive takeaway this morning might just be that Verizon reiterated that guidance. Readers also need to be cognizant of the fact that Verizon (among all U.S. wireless and broadband providers) agreed at the outset of this pandemic to waive late payment and overage fees, while maintaining active service for customers unable to pay their bills due to their individual situation. That pledge ran its course as of the end of June.

The numbers are really all over the place due the impact of this virus. Breaking things down, the consumer based unit contributed revenue of $21.1 billion, which was a decrease of 4% year over year. Wireless service revenue printed -1.7% at $15.9 billion. This number was considerably better than most analysts had been looking for. The business side saw sales slide 3.7% to $7.5 billion. Perhaps the most notable positive came in postpaid wireless subscribers, where Verizon added 76K accounts versus consensus view that had called for a contraction of 100K. Elsewhere, the media business really suffered as advertising dried up. That unit only kicked in $1.4 billion, which adds up to a 24% decline.

This trickiest line is in net subscribers. Verizon reported a net gain of 173K, which includes past-due accounts that were protected through June. Rival AT&T (T) counted 338K past due accounts when they reported earlier this week as disconnected. That decision resulted in AT&T reporting a net reduction in subscriptions of 151K. Lastly, by the end of the quarter, some 60% of Verizon retail locations had reopened.

Just kidding. You can do what you want. I'm not selling my Verizon. At least not just yet. Take a look. 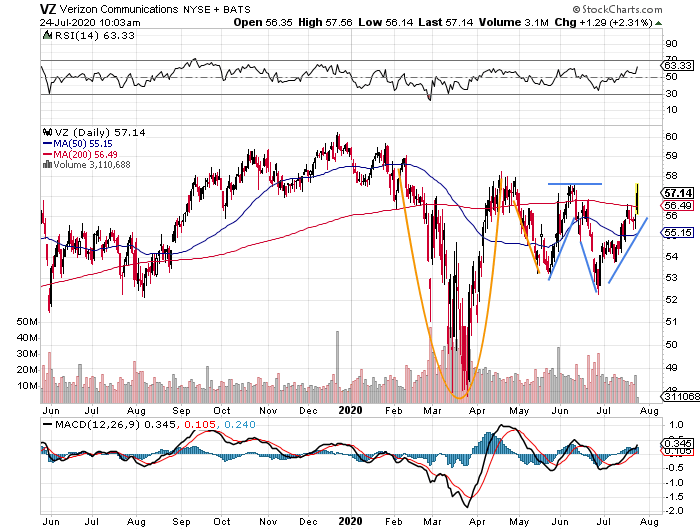 What do we have here? Looks like the same pandemic-induced cup with handle pattern that is visible all over our equity chart universe. The big difference here is that the handle did not produce a breakout, but instead became the left side of an almost perfect double bottom. This moves the pivot to the top of the center of the "W", and that is where the shares are trading right now. In other words, these shares are at pivot, and could potentially break out now.

In the telecom world, breaking out does not mean that the stock goes to $100. It could however mean that the shares go to $65, while paying shareholders $2.46 annually just to hang around. By the way, the next quarterly tranche goes out on August 3rd as long as one was a shareholder of record on July 10th. That's a yield of 4.4%. All things considered, I have no problem allowing Verizon to take up space on my book even if it just sits there.

Get an email alert each time I write an article for Real Money. Click the "+Follow" next to my byline to this article.
TAGS: Earnings | Investing | Stocks | Technical Analysis | Trading | Telecommunications | Telecom Services