You remember Shopify (SHOP) , don't you? The red hot provider of software and services to business needing to establish and maintain an e-commerce presence. The stock was already interesting prior to the pandemic. Then, given the nature of its business, Shopify became an immediate pandemic darling for investors, trading from a low of roughly $305 in March of 2020 all the way up to an intraday peak just short of $1,763 on November 19th, 2021. That's a run of 478% over 20 months for those keeping score at home.

And there is news. Early on Monday morning, Shopify announced a number of proposed updates to its corporate governance structure as well as a stock split. The firm will seek shareholder approval for these proposed changes at a special shareholder meeting set for June 7th.

In addition, the firm also proposes a 10 for 1 stock split of the firm's Class A and Class B shares. If passed, shareholders will receive nine additional shares for every one share (A or B) already in possession after the close of business on June 28th. As mentioned, the firm will look for shareholder approval on June 7th. A two-thirds majority vote of all shares cast will be required to pass the proposal, while separately a simple majority of all votes cast for each class of stock individually will also be necessary, excluding votes controlled by Lutke.

Shopify is expected to report the firm's first quarter financial performance in mid-May. Expectations are all over the map for these guys, so it's very difficult to get a handle of where they are going. I see expectations for GAAP EPS at anywhere from a loss of $0.56 to a loss of $0.39, with adjusted results expected to print anywhere from $0.76 to $1.01. The adjusted comp for Q1 2021 is $2.01. I see expectations for revenue generation as low as $1.24B and as high as $1.57B. The comp there would be $988.7B. Year over year revenue growth that year ago ran up 110%.

The pace of the firm's y/y sales growth acceleration dropped over the subsequent three quarters to 57%, 46% and 41% in order. At the low end of the range... $1.24B, growth would decelerate further to 25.4%. The firm needs to generate revenue of $1.394B or greater in order to crack the trend of slowing acceleration for revenue generation.

As of the last reporting period, which ended on December 31st, Shopify, even with declining sales growth, was indeed supported by improving operating cash flow, leading to free cash flow of $1.86 per share. The firm had an almost stunning net cash balance of $7.789.6B when short-term investments are included (which I do). This brought current assets up to $8.539.3B. Current liabilities? $702.7M. I'm not kidding.

The firm's current ratio at the end of year was an incredible 12.15. "Healthy" doesn't even begin to describe this balance sheet. Total assets of $13.340.2B just dwarf total liabilities of $2.206.8B. The firm does not abuse the use of "goodwill" or other intangibles in order to beef up total assets. Total debt amounted to $911M, which the firm could pay out of pocket and still support an awesome current ratio. To say that SHOP passes the Sarge test does this balance sheet an injustice. The firm is obviously well managed. Additionally, tangible book value worked (on Dec 31) out to $84.45 per share.

This one is difficult. I love the fundamentals that support the business. I hate the valuation. I wonder why the proposals are being made. It feels to me from afar, and I do not know if I am correct (but I am considering the stock for a trade/investment and this is my homework) that for some reason, the current CEO's power is being institutionalized and the shareholders are being noticed with a stock split to vote in favor of the changes. The firm talks about the affordability of the shares and said that this stock split is intended to make share ownership more accessible to all investors. I can't help but wonder if that is the reason, then where was this sentiment six months ago when the shares traded above $1,700. This really puts some hesitation in my trigger finger. 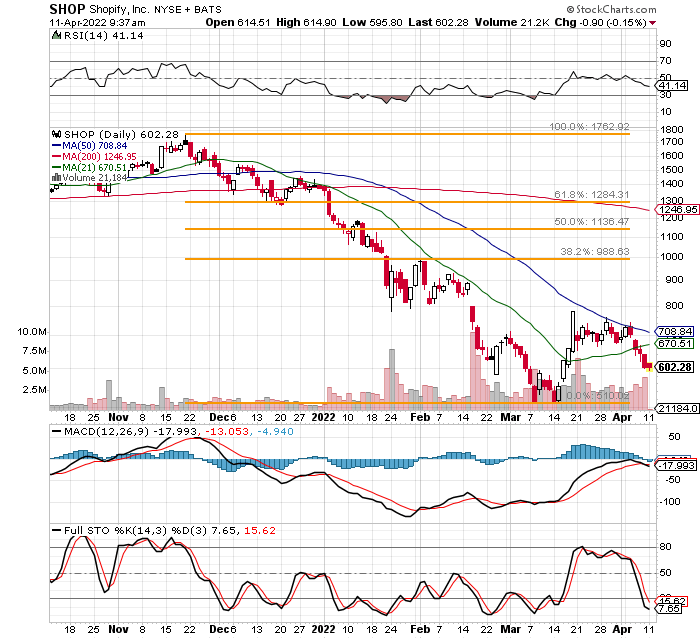 After trading higher ahead of the opening bell in New York, the shares are trading slightly above as well as below "unchanged" shortly after that bell has rung. I have to say that I need to see Q1 earnings and hear the firm's conference call, which will come ahead of the June 7th vote. I just don't trust the reason(s) why. Apparently neither does Wall Street. At least that's the knee jerk.

The stock is trading around $600. Incredibly May 20th $400 puts, which expire after earnings, can still be sold for about $7. That might be the play. I would cover it when I have a profit though. I would not let that one sit. This stock can and could do anything over five of six weeks.

Get an email alert each time I write an article for Real Money. Click the "+Follow" next to my byline to this article.
TAGS: Earnings | Investing | Stocks | Technical Analysis | Trading | Software & Services